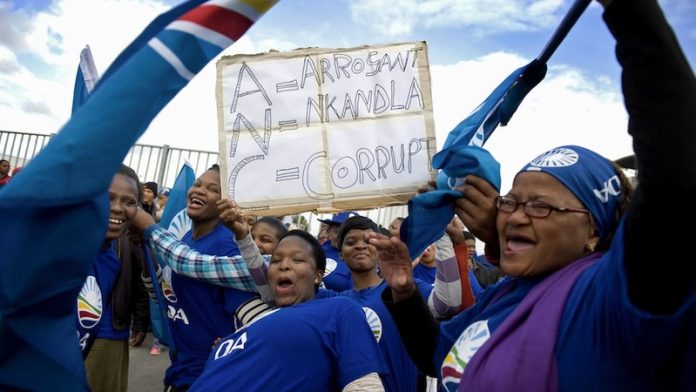 This week the Constitutional Court overturned an electoral court finding that the Democratic Alliance had violated the Electoral Act and code of conduct by publishing “false information” intended to influence the outcome of the elections last year.

In our view, in so doing, the court has blurred the established boundary between “comments” and “statements of fact”, which was needed to ensure that the electorate, while exposed to robust democratic debates, remains reliably informed about the facts underlying them.

The dispute started with an SMS sent by the DA to more than 1.5-million potential voters stating: “The Nkandla report shows how Zuma stole your money to build his R246-million home. Vote DA on 7 May to beat corruption.”

This referred to the public protector’s 400-page report, published one day prior, which concluded that President Jacob Zuma had unduly benefited from public expenditure on upgrades to his Nkandla home.

The ANC complained that this statement about its presidential candidate was untrue, but the high court upheld the DA’s defence that it was “fair comment”.

This defence, derived from defamation law, distinguishes “comments” from “statements of fact”. Both are protected by the constitutional right to free speech, which includes the “freedom to receive or impart information or ideas”.

But there is a difference between “information” and “ideas”, and their expression is protected to different degrees. Damaging statements presented as fact to the reader, viewer or listener are defensible only if true and in the public interest. Comments, being expressions of opinion, may be made more freely, and are justifiable as long as they are honestly held, based on facts, and clearly conveyed as such.

This distinction serves not only to protect the subject of the speech from being maligned but also to protect the public from being misled or misinformed, yet without depriving them of the freedom to exchange even the most extravagant views.

The very nature of speech makes this distinction difficult to draw, but the courts have developed volumes of guidance in defamation cases over the past century. Relying on this, the electoral court unanimously found that the DA’s SMS was not discernible by the ordinary reader as an expression of opinion but rather as a statement of fact, which was false, as the public protector’s report contained no finding or insinuation that Zuma himself had “stolen” anything. The DA was ordered to retract the SMS, but appealed to the highest court.

The justices of the Constitutional Court all agreed on the need to strike a balance between the right to free speech and the right to vote in free and fair elections, but then they split in three very different directions.

Five (justices Edwin Cameron, Johan Froneman, Sisi Khampepe, Dikgang Moseneke and Bess Nkabinde) found that the SMS was not a statement of fact but “an interpretation of the content of the report”, which cannot constitute “false information”. At the opposite pole, three (justices Raymond Zondo, Chris Jafta and Monica Leeuw) believed the SMS was not recognisable to the public as a comment but as a statement of fact, and a false one at that.

The remaining two (justices Johann van der Westhuizen and Mbuyiseli Madlanga) found a third way. They argued that the SMS was neither a comment nor a statement of fact but fell “somewhere on a continuum”, and that the binary between the two was unnecessary and unhelpful in this case. In their view, even “comments” could deceive voters and thus the ban on false information should not only apply to statements framed as fact. It should apply to any expression that “poses a real danger of misleading voters and undermining their right to a free and fair election”. But they found that the SMS did not pose such a danger and, therefore, did not fall foul of the Act.

It is difficult to disagree in principle with Van der Westhuizen and Madlanga, whose judgment is most faithful to the Constitution and the Act. They persuasively argue that “the point on the fact/opinion continuum where a statement lies will dictate the level of scrutiny that ought to be applied in determining its veracity or accuracy”.

But this is precisely what defamation law pragmatically aims to achieve by drawing a line between comments and statements of fact.

The practical reality is that authors, audiences and courts will have to decide whether a particular political SMS, soundbite or tweet is misleading or mere mudslinging. As they walk the constitutional tightrope between the politicians’ right to speak and the public’s right to know, the many precedents separating fact from comment provide a valuable balancing tool, which should not be lightly discarded.

In our view, in this case, that tool was correctly used by Zondo to affirm that legitimate opinion masquerading as factual information must be held to the higher standards of accuracy that informative speech necessarily attracts. The SMS presented the reader with an informative “statement of”, rather than an interpretive “comment on”, the contents of the Nkandla report.

The Act’s requirement that such a statement must be true has, it seems, been diluted by the Constitutional Court’s majority judgment. Its understandable and laudable objective not to quell the free flow of political “ideas” has perhaps raised the risk that the electorate’s well of political “information” may be somewhat polluted in the future.