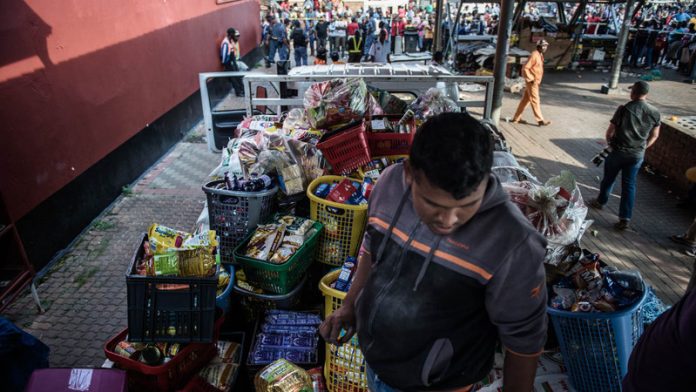 Government officials are right: foreigners are edging out local competition and taking over the spaza space in the townships.

But they are wrong about everything else, including how that translates into looting, why foreigners succeed where South Africans fail, and how to deal with the problem.

“The recent attacks are because township entrepreneurs feel demoralised, frustrated, and they feel they cannot thrive as business owners in their own communities,” Gauteng’s economic development MEC, Lebogang Maile, said this week.

A wide range of politicians and government officials this week reached for similar economic argument to explain the attacks on shops in Soweto and beyond, and dismissed the possibility of xenophobia. But none of the economic arguments has managed to explain why foreign shop owners are resented so intensely, or why it becomes so explosive.

Was desperate poverty in part behind the looting?

In many cases, the looters first went for cellphone airtime vouchers, rather than bread and milk, and then went for other luxury items such as cooldrinks and sweets.

Were foreign shops attacked because locals believe foreigners are robbing them of economic opportunities?

There was no sign that foreigners with professional skills, or those in formal employment, were targeted.

Foreign expulsion
Nonetheless, the rancour runs deep. In August 2014, a large study by the Gauteng City-Region Observatory, a joint project between universities and local governments, found that 35% of all respondents wanted foreigners, without exception, to be expelled.

Nothing but xenophobia, fear and hatred without reason can explain this figure, except perhaps for the small number of locals who have tried and failed to compete in the spaza-shop arena.

A study by the Sustainable Livelihoods Foundation between 2010 and 2013 found that 51.5% of its large sample of spaza shops were run by Somalis, Ethiopians and Bangladeshis. In Delft, outside Cape Town, 70% of South African-operated shops closed down over a 14-month period, leaving local shopkeepers outnumbered three to one, the foundation found.

“You cannot run away from the fact that there are underlying issues and that our people are being squeezed out by these foreign shop owners,” Small Business Development Minister Lindiwe Zulu said this week. Her solution was to resort to regulation, which she believes foreigners do not comply with.

“Non-South Africans should not be allowed to buy or run spaza shops or larger businesses without having to comply with certain legislated prescripts,” she said.

But city councils, tax authorities, labour regulators and others all say regulations are applied equally to all businesses, foreign or local.

Contraband cigarettes
Hard evidence shows, though, that there is one area that is illegal and in which foreigners have the edge: the Sustainable Livelihoods Foundation found that 51% of foreign-owned spaza shops sell contraband cigarettes.

But nearly a fifth of South African-owned shops also dealt in contraband tobacco.

Zulu is among those who believe that, if foreigners are not cutting corners and ignoring rules, they must have some unshared secret to their success. But the only secret seems to be grim tenacity with desperation at its heart.

Research from Gauteng, the Western Cape and KwaZulu-Natal shows that small township retailers are being squeezed hard by a combination of factors. Burgeoning shopping malls are drawing consumers away from smaller businesses. Higher food and electricity prices are reducing disposable income. Those who are most economically successful, and find a firm footing in the middle class, tend to move into the suburbs, taking their money with them.

Unlike their local counterparts, foreign shopkeepers have shown resilience in the face of these pressures. Some club together to buy in bulk and others share the cost of transport to keep prices down.

Their families raise larger amounts of cheap capital among themselves and shop owners can stock a larger range of items. Foreign-owned shops stay open longer and price goods very carefully, rather than imposing a universal mark-up.

So they cling on where others fail, or move into the vacuum left as local traders move out.

Broaden the base
Maile’s solution to such problems is to broaden the economic base.

“We don’t just want spaza shops and chisa nyamas in the townships, but we want to bring in formal business into the township. We need to integrate the township economy into the mainstream economy.”

But, he said, that was being hampered by white monopoly capital, entrepreneurs who lacked access to land and capital, and generally poor infrastructure.

Ironically, foreign-owned small retailers are the only class of entrepreneur who have proven themselves equal to those challenges.

But the traditional spaces for those inclined to do business in the townships continue to shrink.

Holy trinity
According to the director of the Sustainable Livelihoods Foundation, Andrew Charman, historically there were three forms of entrepreneurship in the townships: taxis, taverns and spaza shops.

“Taxis have had a hard time and have been subject to intense regulation. If you look at the liquor trade, there is a squeezing of opportunity in that area. And, with spazas, we have seen the complete displacement of South Africans.”

Displacement, that is, for competing local shopkeepers. For the far larger section of the population who are consumers, the foreign-owned shops bring many benefits. These include the rent paid to landlords (few foreigners own the properties from which they trade) and by providing a channel through which the small-scale producers of goods such as fruit and vegetables can sell their products, which a 2013 research report on Somali informal traders in the Western Cape found.

Although the data differs from study to study, and foreigners have a marked preference for employing family members, some foreign-owned shops do employ locals. Most importantly, locals patronise foreign-owned shops because they are close to their homes and are relatively cheap.

Contrary to some claims, all the evidence suggests that foreigners do not compete with locals for government services. Immigrants and refugees find it either impossible or too expensive to access government healthcare, those who cannot legalise their residency status receive no social grants, they do not receive free or subsidised housing, and foreign traders do not benefit from the support and development schemes aimed at small businesses.

In the corner of a clothing shop he runs in downtown Nigel, concealed behind mannequins and clothing rails, Ethiopian businessperson Ebrahim Ibro still hangs on to reminders of 2013’s xenophobic attacks.

Following a shooting incident in the township of Duduza involving a Somali shopkeeper and a customer over airtime, the township erupted into violence and the looting of foreign-owned shops spread into neighbouring areas such as John Dube and Tsakane.

By the time it reached John Dube’s untarred streets and pastel-coloured RDP houses, Ibro had packed his stock into vans and left the township after only five months of trading.

“I understand that I lose,” says Ibro, shifting the clothing around to reveal damaged, expired stock, ranging from oatmeal to mealie meal and tomato sauce.

“I will keep in my mind and I will understand from this thing what happened to me.”

Foreign traders have become resigned to attacks on their businesses and many have more than one story to tell. In the streets of Johannesburg’s Mayfair, those displaced by looting during the past two weeks are willing to share their tales.

A shoe shiner in a tattered T-shirt, who does not want to be named, says he has lost three shops to violence. “I was looted now in 2015, so now I’m shining shoes. My child won’t be proud of me if he sees me shining shoes. He doesn’t have to know how daddy is making his bread. It’s just bread on the table.”

In a clothing shop, four friends sit and chat. A cellphone rings. Shukri Samantha, from Somalia, answers it and becomes agitated. “They are coming after us; the person is saying a group of people are walking past one of the shops,” she announces in a hysterical tone.

A woman behind the counter, who has been watching videos of the looting in Soweto on a laptop, jumps from her seat and runs out of the shop. She is followed by a Somali couple, Bashi Abdihalane and his wife Asha Ahmad.

Outside, everything seems fine; people in the streets are calm.

Minutes later those who fled the shop walk back in. Samantha says she used to run a spaza shop in Meadowlands in Soweto until she was forced out because of looting.

“We are scared now. Every time we see people walking in groups, we get scared that they might attack us,” says Abdihalane in a shaky voice, as he sits down next to his wife.

The couple was recently forced from their Soweto spaza shop by an angry mob. In 2010, Ahmad’s sister was killed during an attack on a Port Elizabeth spaza shop.

If nothing changes, it may not be the last story they have to tell.

“We are scared but we are ready to go back as soon as the situation is normalised,” Ahmad says. – Kwanele Sosibo and Rapula Moatshe, who is the fellow for Eugene Saldanha social justice reporting