The napalm nature of capitalism

There was a pack of them. Young. Boys. They commandeered the bus with their loud voices and proud tales of recent conquests. Sex, booze and prohibited local delicacies – a familiar tale in Southeast Asia, a more sensitive one in GI Joe Vietnam. The scene reminded me of Full Metal Jacket, their weapons a dangerous mix of youth, testosterone and American white privilege. Forty years ago, they would have been drafted, on a different bus, maybe going in the same direction – the now famous Cu Chi tunnels, an hour outside of Saigon.

“Do you mind if I sit here?” The voice was polite, his Dodgers cap still on sideways from his comic antics, his surfer’s vest ripped to reveal a Californian tan and solid gym contract. He seemed confused about his identity. His clothes spoke of a laid-back surfer, his physique pointed to a disciplined jock and his words said anything his friends wanted to hear – usually crude jokes that kept them entertained in between tweets and selfies.

We were on a tourist bus, getting ready to squeeze our high-carb bodies into Viet Cong tunnels fashioned for rice lovers, and have our friends capture the hilarity of the attempt on HD video. There was no pretending any of us were serious war enthusiasts. Even our local guide kept ­pronouncing Cu Chi like “Gucci”, reinforcing the commercialism of our half-day tour, along with the free wi-fi on the bus. 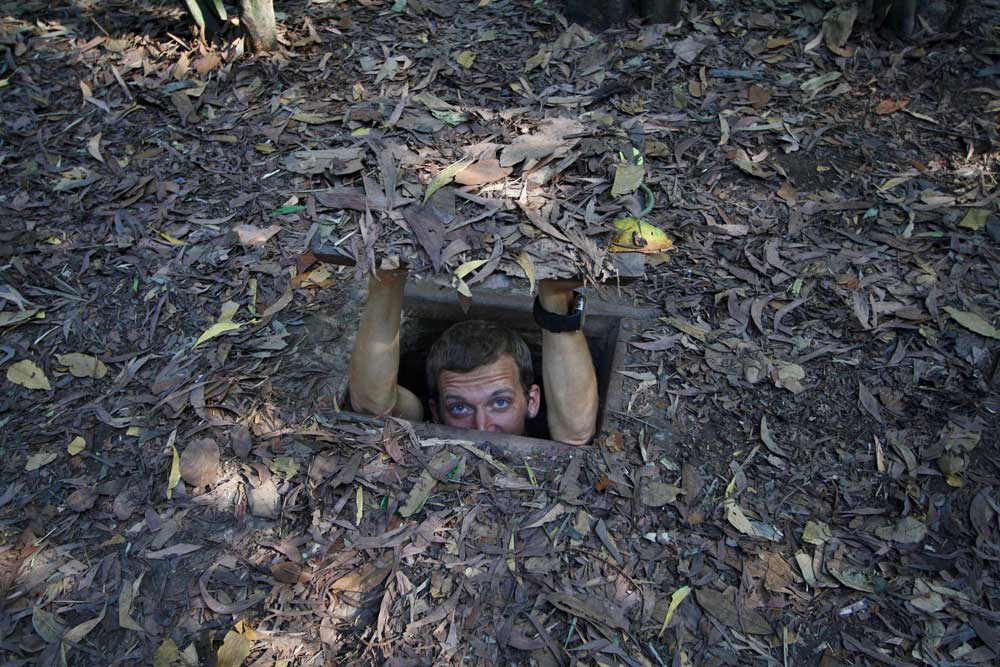 War is big business in Vietnam. If you are a pro-gun enthusiast, who has been dreaming of leopard crawling through a dark tunnel or firing a machine gun with Rambo enthusiasm, you’ve come to the right country in the right century.

The historical buffs usually start with the War Museum in Saigon –three floors of graphic images that lay bare the torture, horror and ­brutality of the Vietnam War, including the infamous Agent Orange, a lethal chemical that has caused physical and mental deformities in the affected population, now two generations down the bloodline.

Even between floors of propaganda and historical accounts curated by the victor, you start to see the bigger picture in its Pulitzer prize-winning glory. No one won this war. No one. Not the gun-swinging Joes who lost their innocence and youth; not the peasant soldiers who lost their families and land. Two countries were gutted and no soldier came out of the jungles unscathed by the horrors of what he saw and did in the name of freedom.

This might not be such a popular belief. As I leave the museum I hear an American tourist (of veteran age), dressed in army fatigues, directing his Vietnamese guide to take a photo of him beside the American fighter jet. I stop, stunned, and watch him walk over to yet another US army tank/trophy, where he stands, posing with the broad smile of a proud parent who doesn’t know his child is the school bully.

If the war is remembered, the enemies have not been reconciled beyond the awkward truce called in the name of commerce and commercialism. If there’s a T-shirt slogan in there somewhere it would be: “Good Morning, Vietnam. How do you take your Starbucks?”

Being commercialised has its ­benefits. It caters for all tastes and budgets. So if you prefer your experience a little more Disney and a little less Oliver Stone, you can take a half-day “Good Morning, Saigon by army jeep” tour, which takes you to all the best sites and throws in a ­“traditional” breakfast with some well-chosen locals. It’s the stuff of Zapiro cartoons – old white men being driven around Saigon in pimped-out army jeeps passing ­Starbucks and McDonalds on their way to take photos at another war memorial.

I imagine my new bus buddy has already ticked all of these tourist boxes. He seemed the type, just as I seemed the type to judge. It’s a funny thing about Westerners on the “war circuit” tour of Southeast Asia. We tend to shift from the defensive to offensive, play to stereotypes as much as debunk old cultural beliefs.

But I don’t need a tourist pamphlet to tell me what’s in plain sight. We are not some hippy, multicultural collective. We are the people of Japan, Australia, the United States, Britain, Belgium and South Africa. We all have blood on our hands. We all have a lot to reconcile, if not pay for beyond this $7 tour.

After two hours, we exit the bus and start our walking tour of the tunnels. Our guide quickly adopts a “David and Goliath” narrative when talking about, or maybe showcasing, the bamboo-stick ingenuity of the brave peasant heroes against the monstrous might of metal. This doesn’t surprise me. Vietnam loves propaganda, more than it does a cold McFlurry on a steamy Saigon ­afternoon.

And it doesn’t surprise me that “Dodgers” spends the tour playing to his fraternity stereotype. He makes offensive jokes, laughs at the cultural displays and talks his way through historical fact and fiction until he finally gets his Hollywood ending – the chance to shoot an M16 or AK-47 at the on-site firing range. It’s one of those “pay per bullet” experiences when unchecked testosterone can cost you an arm and a leg, economically speaking.

I don’t enjoy watching men shooting metal at fibre, but I did enjoy thinking that the locals probably recycle the shells and sell them back to Dodgers and his tribe at the Dan Sinh war surplus market. Poetic justice, as it goes.

The Vietnam story is a difficult one to unravel. If “history is written by the victor” and no one wins, who has the right to own and tell the story anyway? The Americans seem to want to keep it quiet. As Dodgers would later tell me, they don’t learn about the Vietnam War in government schools. All he knows is that “it was a ‘draw’”, he says matter-of-factly. “Do you mean a withdraw?” I counterbalance, cheekily. He laughs uncomfortably so I back down and call a truce.

I confess that what I learnt about apartheid at school could fit on the label of his surfer’s vest. He smiles and I suddenly see him for the boy that he is, or maybe the man he is searching to be. He tells me of his own struggles at home, student debt and youth unemployment. His war is ahead of him and he isn’t confident he has the tools to win.

I swap tales of my own war stories, bemoaning a lack of leadership and an abundance of corruption in my country. We are not so different, Dodgers and I. We both have struggles that we poke at with flimsy ­bamboo sticks, hoping they will withdraw one day.

Listening to Dodgers I am ­suddenly grateful for my age and nostalgia for my country – a country that once understood we are all victims of our injustices, fears and prejudices, however big or small, whatever side of the protest you find yourself on.

And for the first time I understand what the Truth and Reconciliation Commission was trying to tell us and the world – that wars will always find remembrance in memorials and museums but the people can only find truth and reconciliation through dialogue, especially with people like Dodgers.

Confessions of an online dater

What are we buying into?

More lost than fungi in France