Memorable moments from the Grammys 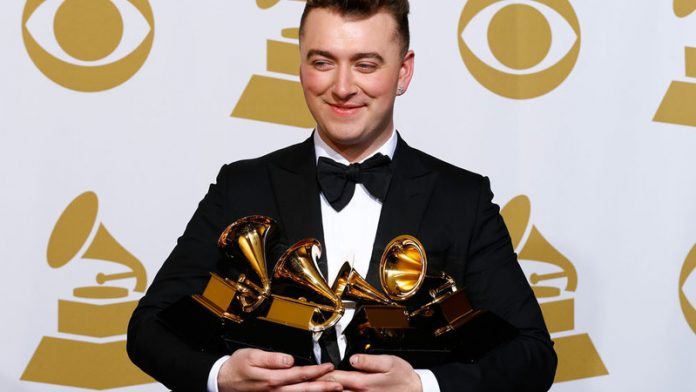 QUICKQUOTE
“This is the best night of my life. Just a quick one: I want to thank the man who this record is about, who I fell in love with last year. Thank you so much for breaking my heart because you got me four Grammys.” – Sam Smith after winning his fourth trophy. – Derrik J. Lang

THESE THINGS MATTER
“Like books and black lives, albums still matter.” – Prince, presenting the album of the year award at the Grammys. – Sandy Cohen

STOP DOMESTIC VIOLENCE
Amid the music and celebration, the Grammys turned serious for a moment when President Barack Obama called on musicians and music fans alike to pledge to stop domestic violence. “It’s not okay and it has to stop,” Obama said in a spot aired during Sunday’s Grammy Awards.

“Artists have a unique power to change minds and attitudes and get us thinking and talking about what matters.” Domestic violence survivor Brooke Axtell followed, taking the Grammy stage to share her experience as a survivor and to urge others to recognize their worth and seek help to save themselves. Her life was saved, she said, when she sought help at a domestic violence shelter. Katy Perry followed with a solemn performance of By the Grace of God. – Sandy Cohen

QUICKQUOTE
“I don’t want one play to define me as a player.” – Malcolm Butler, whose last-minute interception won the New England Patriots the Super Bowl, backstage at the Grammys, where he served as a presenter. – Sandy Cohen

QUICKQUOTE
“I’m excited to sing from my heart for my mother, for my daughter, for my family and for all the families across the world.” – Kanye West on performing at the Grammys for the first time in six years. – Nicole Evatt

QUICKQUOTE
“He styled me. He picked the look. He called the designer. He did it all. I just tried it on. It fit, it looked great. I was so happy. I’m so lucky.” – Kim Kardashian on how husband Kanye West helped her get ready for the Grammys. – Nicole Evatt

QUICKQUOTE
“This is super awkward and I’m going to moonwalk my way off this stage right now.” – Pharrell Williams accepting the Grammy for pop solo performance for Happy. – Sandy Cohen

STOPPING GRAMMY HUNGER
Kaskade’s Grammy fashion statement was inspired by worries about hunger and low blood sugar hitting him during the long-running show. His metallic blazer looks a lot like rock candy. “If you lick it, you’ll be okay,” he quipped. The Grammy nominee also says he’s pleased that electronic dance music, or EDM, has finally come of age in the eyes of the people who hand out the Grammys.

There are now three categories for dance music, including best non-classical remixed recording, the one in which Kaskade was nominated. “It’s awesome,” he said. “It seems like just yesterday we were fighting for a category.” – Derrik J. Lang

QUICKQUOTE
“He’s the one guy that’s always said no to parodies. I’m a big fan of Prince’s. If he wants to go bowling or play Parcheesi with me, I’m certainly up for that.” – Best comedy album winner “Weird Al” Yankovic on whether he’ll try to meet Prince at the Grammys. – Sandy Cohen

QUICKQUOTE
“There are second acts in American life. I just showed up for work for 35 years and this is what happened.” – Rosanne Cash, who won three Grammys Sunday. – Sandy Cohen

SUCCESS WILL GO ON HIS HEAD
Every musician has his or her own Grammy ritual. For “Weird Al” Yankovic, if he wins he takes the gramophone-shaped trophy and attaches it to his head. “I’m kind of like a Grammy unicorn,” says the accordion-squeezing funnyman, who won his fourth Grammy on Sunday. Yankovic, who won his first Grammy 30 years ago, says it’s still a thrill just to be in the running. “I never get jaded about it,” he said. – Derrik J. Lang

QUICKQUOTE
“If my mother was here tonight, she would not only be honored and thrilled to be holding her first Grammy, she would most likely have it copied and on the air on QVC by 11.” – Melissa Rivers, accepting the spoken-word Grammy on behalf of her mother, Joan Rivers, for Diary of a Mad Diva. – Sandy Cohen

THAT’S WHAT A GRAMMY’S ALL ABOUT
How will Sam Smith celebrate after the Grammys? He wants to go to In-N-Out, that overwhelmingly popular Southern California burger chain. And don’t worry about all those calories he’ll rack up with a double-double or two. Smith says he’s been dieting just for this night. He was nominated for six Grammys, including record, album and song of the year, something he called “surreal”. But not as surreal as when Stevie Wonder asked him to drop by his dressing room. Wonder ended up performing one of Smith’s songs. “That’s just crazy,” he said on the red carpet. – Derrik J. Lang

QUICKQUOTE
“I’m just happy people know who I am. Last year, no one knew who I was.” – Sam Smith, nominated for six Grammys, including record, album and song of the year. – Derrik J. Lang

THE VIDEO MUST GO ON
Whatever happens to Grammy nominee and performer Hozier, he has a music video to shoot after he’s finished with the Grammy Awards. “Hangover or not, there will be a music video,” the nominee for song of the year said on Sunday’s red carpet. – Derrik J. Lang

MYSTERY PAIRING
Will the third time be the charm for Lang Lang? After teaming with Herbie Hancock and Metallica for past Grammy performances, he’s back this year for another go. This time it will be with – well – the Chinese concert pianist isn’t saying. But word is it will be with Pharrell. He did hint that it will be with a popular male singer and feature an arrangement by Hans Zimmer. “The Grammys are always filled with surprises, whether it’s making new friends or the performances,” he said before the show. – Derrik J. Lang

TODAY A GRAMMY; OSCAR NEXT?
Before Glen Campbell’s song heads to the Oscars, it was a winner at the Grammys. I’m Not Gonna Miss You, from the documentary Glen Campbell: I’ll Be Me, won best country song at Sunday’s show. It’s nominated for best original song at the Academy Awards. Campbell, who is battling Alzheimer’s disease, didn’t attend the Grammys. “I am just so proud of him tonight … he’s been so courageous,” his wife, Kim Campbell, said onstage.

“Sadly, he can’t be here with us because he’s in the late stages.” She added: “Music I really believe kept him healthy.” The Band Perry won best country duo/group performance for their cover of Campbell’s Gentle On My Mind, which appears on the documentary’s soundtrack. – Mesfin Fekadu

YOUNGEST FAN
Chris Thile and Claire Coffee brought a very special plus-one to the Grammys: their unborn son. Grimm actress Coffee said she’s prepared for the long ceremony with hydration and snacks. “Shoes are more of an issue,” said Coffee alongside her husband, who is up for several awards. If he loses in every category, Thile said, Coffee has promised to let him buy an expensive bottle of wine as a consolation prize. – Derrik Lang

‘FROZEN’ GETS 2 GRAMMY WINS
The soundtrack for the animated tale Frozen burned the competition at this year’s Grammy Awards. The top-selling recording won two awards, including best compilation soundtrack for visual media. Idina Menzel’s Let It Go, which also won songwriters Kristen Anderson-Lopez and Robert Lopez an Academy Award, took the Grammy for best song written for visual media. “Thanks to everyone on YouTube,” Lopez said onstage. “This is also for both sets of our parents who had rough times this year.” The Frozen soundtrack has sold close to four million units. – Mesfin Fekadu

TIESTO’S BIRTHDAY GIFT BECOMES GRAMMY WIN
DJ-producer Tiesto remixed a song for his birthday and now he has a Grammy for it. Tiesto remixed John Legend’s pop ballad All of Me, which won the Grammy for best remixed recording, non-classical. Tiesto said he “made this remix spontaneously” for his birthday. “I gave it away as a free download,” he said.

Tiesto said Legend enjoyed the remix so much that he made it official. The version was a hit on pop radio in addition to the original version. Legend’s live version of the song is nominated for best pop solo performance. The song peaked at No. 1 on Billboard’s Hot 100. – Mesfin Fekadu

XiXi Yang contributed to this report.

Record of the Year
Sam Smith – Stay With Me (Darkchild Version)

Song of the Year
Sam Smith – Stay With Me (Darkchild Version)

Best Country Solo Performance
Carrie Underwood – Something In The Water

Best Children’s Album
Neela Vaswani – I Am Malala: How One Girl Stood Up For Education And Changed The World (Malala Yousafzai)