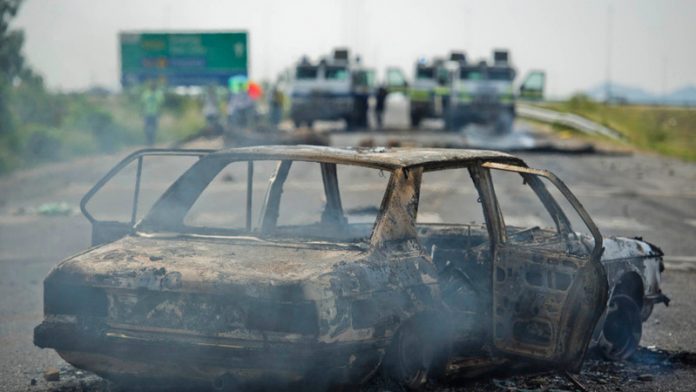 “The only thing we want is water. We don’t care about the other things they say they will give us. RDPs and other stuff can come later.”

These are the words of 79-year-old Franscina Pelo, a resident of Majakaneng just outside Brits in the North West. Pelo has lived in her shack in Majakaneng for 25 years, all the time without running water or a toilet.

“How can you live like this, this long … from 1990 in Majakaneng? I don’t have a toilet. My yard is full of holes. I’ve had to dig up holes to use as toilets,” she said.

Majakaneng has had no running water since it became a settlement in the late 1980s.

Government update
Pelo and other pensioners were told to go to the local community hall on Monday where the minister of water and sanitation, Nomvula Mokonyane, the premier of the North West, Supra Mahumapelo, and the MEC for local government and human settlement, Collen Maine, would inform them about progress made regarding water, sanitation facilities and housing.

“Yesterday they said to us, ‘Our grandmas, please come through and register for your RDP houses’,” she says. “We woke up very early and we are even starving now. Rekokometse fa [We are just sitting here like ducks]. No one has come to us and said, basadi baholo [pensioners], it’s fine, go home because the meeting has been cancelled. I have been here since four this morning.”

Tears roll down her face.

Pelo holds her face as she struggles to hold back the rest of her tears. There are creases on her face and on her hands.

Another resident adjusts Pelo’s hat to protect her face from the unforgiving Majakaneng sun and others yell, “Tell them ngono [grandmother]”.

The interview is taking place after midday and she and the other pensioners have been waiting at the community hall without water or food for more than six hours.

No-show
The minister, premier and MEC are a no-show. The temperature is more than 30°C. Some residents hold their umbrellas over the pensioners and others use their hands as fans in an attempt to cool the air. Most of the elderly sit on the hot gravel ground from sheer exhaustion and hunger.

“And what hurts the most are the lies they spread about us, the community,” Pelo says. “They say we are the ones who cause trouble and chaos in our community. In future, when our children start to fight again … when they get angry then they will say, ‘You can’t control your children’.”

Majakaneng has been in the grip of a weeklong service delivery strike that turned violent. Burning tyres were thrown into a tourist bus and a truck was torched. A number of journalists were attacked and some had their cars and camera equipment taken.

The youth took to the streets and barricaded the roads, demanding that the government give them access to the water supply.

“I don’t have water, I can only use two scoops to wash myself,” says Pelo. “How can we stop them [our children] when the same ANC municipality is the one who makes them angry?”

ANC failure
The main sentiment in Majakaneng is that the ANC has failed them and the only way to get the government’s attention is through violent protest.

Agnes Hlophe and Simphiwe Mahlangu were born in 1994 but are still to reap the benefits of a democratic South Africa. Hlophe and Mahlangu are also at the community hall.

“You should see how we live,” says Hlophe, who was born in Majakaneng and now has her own shack where she lives with four other family members — her grandfather and three children.

“This is so painful. The ANC has failed us, the community. They have made promises but done nothing. Nothing. They have failed us.”

R10 a day
Hlophe says a 25-litre container of water costs her R2 for and she can afford five a day, although this isn’t enough.

Mahlangu, also a born-free, says it is “painful to live like this, especially because I am a woman. Each and every time when you think about the situation at home, you think of doing something you would otherwise never do.

“The ANC has failed and they have failed us a lot. They have made a lot of promises but have done nothing for us.  When we are quiet and silent, I don’t think they understand us. The word they understand is violence.”

The premier of North West, Supra Mahumapelo, said on Wednesday that he, MEC of local government and human settlement Collen Maine and Minister of Water and Sanitation Nomvula Mokonyane had not committed themselves to a meeting with the residents of Majakaneng on Monday.

“That is not true. We would not have been able to go on Monday. I even called Nomvula to say to her that Motsweding [FM radio] was telling people she would be there on Monday. And people showed up because they listen to Motsweding,” the premier said.

But things were going well in Majakaneng, he said, and water was restored on Wednesday.

“There was no water on Monday but we told them that water technicians will be working on the pipes. Today there is water flowing but it still has toxic chemicals.”

He said his department would notify the residents when the water was drinkable, “but they can use the water to clean and wash”.

“I think there was a miscommunication. I can confirm that I also heard from the radio and then I called Nomvula. She cancelled,” he said.

Meanwhile the minister of water and sanitation spokespweson Collin Pitso said, the Mokonyane did not go to address the community on Monday because the premier had addressed the community concerns over the weekend.

“The department issued a notice and live reads to inform the community that the Minister’s [Mokonyane] visit is postponed. Our technical teams were however sent, and together with the mayor, they set up the Water forum that would represent the aspirations of the community,” said Pitso.

“It is regrettable that the elderly did not receive the message for the postponement of the visit,” he said.