EFF vow to continue quest for Zuma to step down 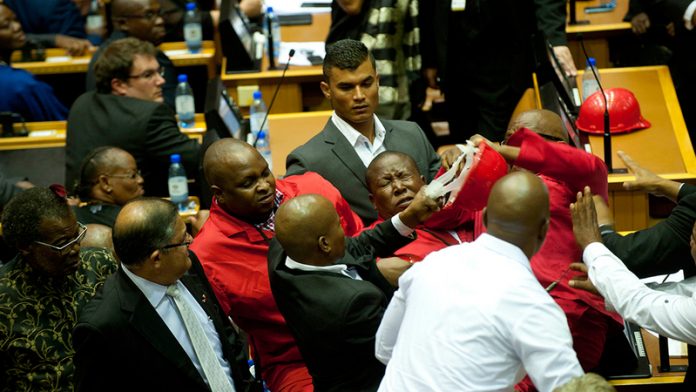 Economic Freedom Fighters Julius Malema has revealed that whether or not President Jacob Zuma pays back the money, that would not stop their efforts in forcing him to step down. The EFF has thought about this carefully.

The Public Protector Thuli Madonsela recommended in her report that President Jacob Zuma pay back a portion of the money spent on his Nkandla home – so in an effort to promote accountability, the EFF wants to know when that would be.

Zuma has evaded the question since it was posed to him last August. Malema said they would not stop until Zuma answers when. But even if by some miracle, Zuma would buckle to the pressure and agree to pay, it would then mean he was admitting culpibility. And the EFF said this is more than enough to force Zuma to resign.

“If he is saying he benefitted then he must resign,” Malema said. But if Zuma’s comments to a breakfast briefing on the morning after his address is anything to go by, the President will not play by EFF rules – or any rules for that matter.

He believed Speaker Baleka Mbete did “an excellent job” in how she handled EFF’s disruptions during his address. “I think the Speaker was very patient,” Zuma said.

Jaw surgery
The EFF on Friday detailed how they were hauled out of parliament by alleged police officers and presidential protection officers, assaulted repeatedly and some where escorted out of Parliament through a ‘secret passage’.

Malema alleged in a press conference that:

The party’s fight back is multifaceted.

First up, the party will approach the constitutional court to have the whole episode which led to the MPs being violently forced out of parliament declared invalid.

At the same time Mashabela is expected to sue parliament for the physical injury she incurred during the altercation. Malema said it was parliament’s duty to defend her.

The EFF said they will continue putting on pressure and are likely to cause as much chaos the next time Zuma appears before parliament. “We are waiting for him on the 11th of March (to answer questions),” Malema said.