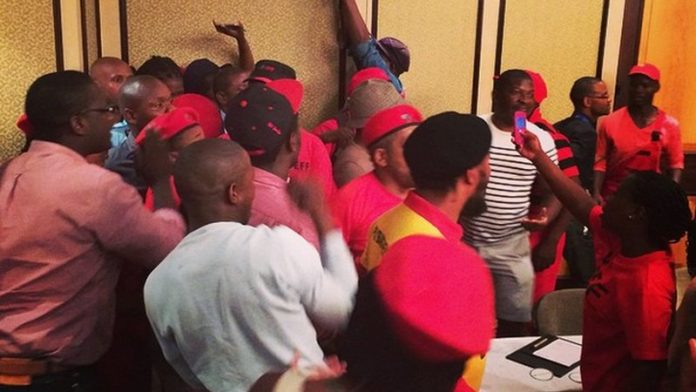 “The EFF will not be taking any future public communication with regards to this matter as it is an internal process, and hopes that both members of the media and the concerned fighters will also co-operate,” spokesperson Mbuyiseni Ndlozi said in a statement.

Ramakatsa and Twala are said to be aligned with an EFF faction that includes MP Andile Mngxitama.

On Tuesday, the EFF announced it had suspended Mngxitama and fellow MP Khanyisile Litchfield-Tshabalala.

“The central command team of the Economic Freedom Fighters has taken a decision to take disciplinary action against fighters Andile Mngxitama and Khanyisile Tshabalala,” national spokesperson Mbuyiseni Ndlozi said in a statement issued at the time.

It stressed that it was an “internal process and we shall not be engaging the media about it beyond this point”, adding that “the leadership hopes that fighters Mngxitama and Tshabalala will also co-operate and give the internal process of the organisation due respect and attention”.

Faction fighting
Last Thursday, Mngxitama had to be escorted out of the Cape Sun Hotel in Cape Town, where he had intended holding a press conference ahead of the State of the Nation address in Parliament.

Fights broke out between EFF members and Mngxitama’s supporters. The EFF members refused to leave the venue and said they wanted to hear what Mngxitama had to say.

On Tuesday, Mngxitama held another press briefing in Johannesburg where scuffles broke out again when a handful of EFF members tried to block the entrance, preventing Mngxitama and his supporters from going in.

The Mngxitama faction announced a “Save the Soul of the EFF” campaign, amid their suspensions from the party, violence, claims of assassination attempts and one MP waving a gun publicly in “self defence”.

Mngxitama, Ramakatsa, Litchfield-Tshabalala and Twala said they would be approaching the courts to have the EFF’s books laid bare for an external audit, the national people’s assembly – which elected leadership – be declared null, and to push for a lifestyle audit of the EFF leaders.