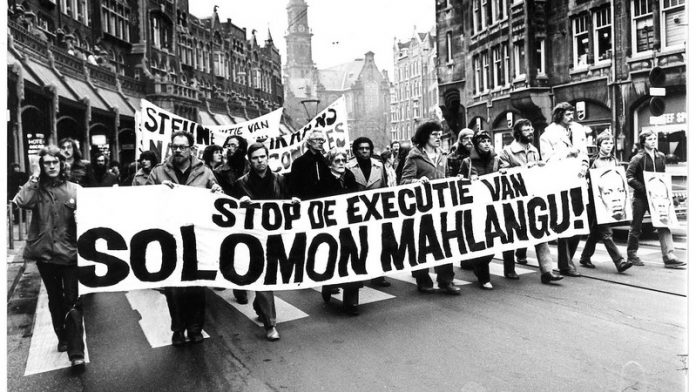 Struggle veterans acknowledged the role the Dutch played in the fight against apartheid at a photographic exhibition honouring and depicting the life of Nelson Mandela.

Hosted by the Netherlands embassy, the exhibition is titled Signs of Solidarity: The Dutch Against Apartheid. It presents material from several sources, but mainly from the International Institute of Social History in Amsterdam.

Among the photographs is one that shows Mandela’s first visit to the Netherlands. He is standing on a balcony and addressing a huge crowd.

Marisa Gerards, the ambassador of the Netherlands, said at the exhibition’s launch: “I am glad that we can tell a story of solidarity and friendship. South Africa fought a cruel and inhumane system, but peace was found through negotiations, which was a good process to the world.

We also visited the torture rooms in the Castle [of Good Hope] … By putting the exhibition here, it tells a story of people who found each other.”

Countries united
Advocate Albie Sachs said that the Netherlands was not the only country that supported the anti-apartheid struggle, but it was the most dedicated. “We received enormous support from India, the Scandinavian countries, New Zealand because of the rugby, the United Kingdom, but the Netherlands was the most dedicated. And you had no rugby teams or huge investments in South Africa.

“Millions of Dutch people felt that apartheid was a moral issue. I like visiting the Netherlands, especially their museums. Dutch people have huge determination. You will see this in the photos in the exhibition.”

The Dutch were against the fact that the majority of South Africans had no voting rights in their own country, he said.

“This also makes me think about Beyers Naudé, who was expelled from the Dutch Reformed Church because he was involved in the struggle so that people could go to university. And, of course, the late André P Brink with his ideas of diversity.”

A pillar of solidarity
Poet Antjie Krog told a story of how, when she was teacher in the Free State, a matric class and a group of Dutch pupils “found” each other in 1989 on a bus during a school outing.

The chief executive of the Castle Control Board, Calvyn Gilfellan, said he was 28 years old when Mandela was released from prison.

“The struggle was fought on different fronts, which included the United Democratic Front and international solidarity. I remember that, in 1987, Bono said artists should unite against apartheid. And today the world looks at us as a pillar of solidarity.”

The exhibition will be showing at the Castle of Good Hope (until March 11), the University of Cape Town (March 13 to April 3) and Klein Karoo Nasionale Kunstefees in Oudtshoorn (April 6 to 12). For more information, contact the Netherlands embassy on [email protected]za.nl