In a “top secret” presentation, the energy department has proposed a closed government-to-government procurement of new nuclear power stations instead of a transparent and competitive ­tender.

If adopted, this would pave the way for the nuclear co-operation agreement it concluded with Russia in September – or “similar” agreements it concluded with France and China after an outcry that it was favouring the Russians – to be implemented without pitting potential suppliers openly against each other.

This flies in the face of public assurances from the government that it would follow a competitive process.

During his State of the Nation address last week, President Jacob Zuma said all countries that bid “will be engaged in a fair, transparent and competitive procurement process to select a strategic partner, or partners, to undertake the nuclear build programme”.

If the mooted six to eight nuclear power stations are built, it will be South Africa’s most expensive procurement yet, at roughly R1-trillion. 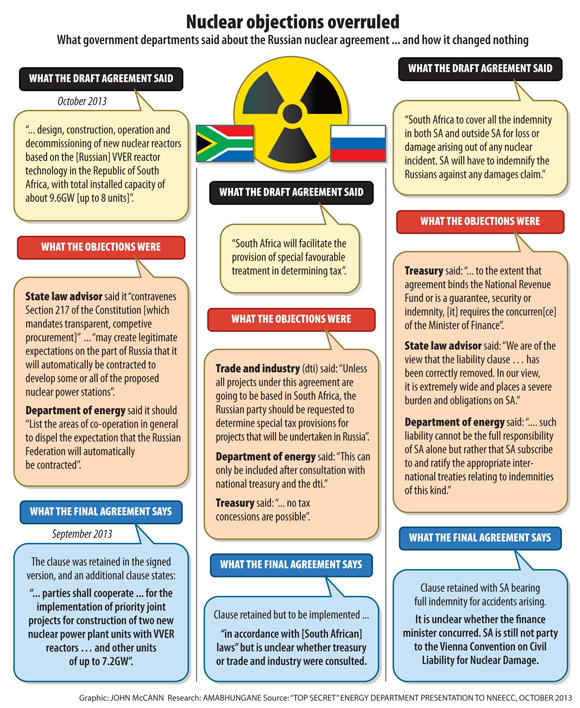 The agreement with Russia, revealed by amaBhungane last week, states that the South African government is prepared to give Russia the exclusive rights to its nuclear build programme for a minimum of 20 years. During that time, Russia could block South Africa from procuring nuclear technology from any other country.

The agreement is not yet binding, as it requires the National Assembly and the National Council of Provinces to ratify it.

The energy department’s recommendations on the procurement method are contained in a separate document obtained by amaBhungane. It is marked “top secret” and was prepared for presentation to the national nuclear energy executive co-ordination committee in October 2013.

This was a Cabinet committee comprising the ministers and government officials directly responsible for implementing the new nuclear programme and was chaired by President Jacob Zuma.

It was renamed the Cabinet energy security subcommittee last year, and its scope was broadened to tackle the country’s energy supply crisis and its composition of ministers was re-adjusted slightly.

The document also recommended that the energy department be appointed as the procuring agency, in effect sidelining Eskom, in which the bulk of the government’s nuclear energy expertise lies.

No comment
The department did not respond this week to a question about whether the Cabinet had adopted its recommendations.

But responding to questions about the Russian agreement last week, the deputy director general for nuclear energy in the department of energy, Zizamele Mbambo, said: “At this stage, the department is engaged in the pre-procurement phase. The type and nature of procurement process has not been approved by Cabinet. It is, therefore, premature to comment about the perceptions of the process that has not been started.”

The purported advantages of the government-to-government approach, which the department ultimately recommends in the presentation, include:

• Access to technology and opportunities to develop local industry (for the buyer); and

The drawbacks it notes are:

• A lack of transparency; and

Despite the apparent global tendency to conclude nuclear tenders one on one, and behind closed doors, the lack of transparency is likely to jar with what South Africa’s Constitution says about procurement.

According to section 217, “when an organ of state … contracts for goods or services, it must do so in accordance with a system which is fair, equitable, transparent, competitive and cost-effective”.

The presentation on procurement models is followed by several slides summarising other government departments’ responses to a proposed draft version of the nuclear agreement with Russia. These include a comment by the state law adviser that a clause in the agreement that specifically refers to “the design, construction, operation and decommissioning of new nuclear reactors based on the [Russians’] VVER reactor technology” would contravene section 217.

But the adviser draws the department’s attention to the Preferential Procurement Policy Framework Act, which, he says, gives the finance minister the discretion to override the constitutional injunction if “it is in the interests of national security” or “the likely tenderers are international suppliers”.

Read more closely
Arguably, both these conditions might apply to the nuclear tender.

In any case, the clause in the Russian agreement that gave rise to the objection is retained verbatim in the final signed agreement, as are others about which different South African officials also raised concerns.

The other listed drawback, determining value for money, is problematic because the estimated R1-trillion cost of the full planned procurement of six to eight new reactors would be 10 times more than any previous, known procurement by the state.

The department issued a tender for a study on the cost of nuclear power in May 2013, but Mbambo refused a request by amaBhungane, under the Promotion of Access to Information Act, to see it.

History doomed to repeat itself
The last time the government bypassed the Constitution on a major public procurement, the deal went badly wrong.

In 2005, it signed a reported R4.6-billion deal with Airbus for eight A400M military transport planes.

The government bypassed the tender process by becoming part of a nine-nation consortium that would manufacture the aircraft.

“We are not an ordinary buyer … the contract makes us a part of the procurement and production process,” the then public enterprises minister, Alec Irwin, told Business Day at the time.

But in 2009, then defence minister Lindiwe Sisulu cancelled the deal after the projected final cost had ballooned to more than R40-billion.

“The termination of the contract is due to extensive cost escalation and the supplier’s failure to deliver the aircraft within the stipulated timeframes,” a government spokesperson said at the time.

The lessons of the Airbus debacle are there to be learned, so it remains to be seen whether section 217 will be bypassed again.

Lionel Faull
Lionel Faull began his career as a journalist at the Mail & Guardian newspaper in South Africa before joining the country's pre-eminent non-profit investigations team, amaBhungane, in 2011. He has been working with Finance Uncovered since January 2017, joining as a full-time senior reporter a year later