Who gets to hold a society’s moral authority? 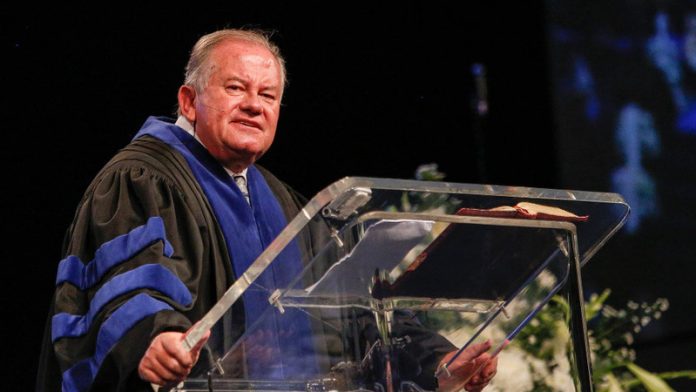 As the Economic Freedom Fighters demanded of President Jacob Zuma last Thursday night to explain when he would “pay back the money” and chaos ensued with the forceful eviction of the party from Parliament, the failure to mediate another ending became apparent.

In the weeks before the chaotic State of the Nation address, Pastor Ray McCauley, leader of the charismatic Rhema Bible Church, had handled negotiations between the EFF and the ANC. At one point he was “95% sure” a solution would be hammered out. But this fell apart. Speaking at the time, McCauley said: “We are facilitators, not politicians.”

He had become involved because the issue at hand was a moral, not a political, one. “I think we need to be a moral compass somewhere on the basis of what goes on in the country.”

His role has since been critiqued. “It is very questionable to turn to the leader of a prosperity gospel church to mediate between groups that have a public dispute,” said philosopher Lucy Allais, of the University of the Witwatersrand. “He [McCauley] is not in a strong position to be a moral figurehead.”

Quite what made a moral figurehead – someone who could mediate on national issues and question the direction of social issues – was difficult to say. “To have moral authority you should always speak principally and with moral authority on issues. Then people will trust your intentions.”

“On fundamental issues we all know what is right and wrong so society as a whole should be guiding government on moral and social issues.”

Predominantly Christian
This used to be the approach of the ANC, which presides over a country that is more than 86% Christian. During the anti-apartheid struggle it worked with religious figures, such as Anglican Bishop Trevor Huddleston, who acted as the public voice for opposition movements and was a consistent thorn in the side of the apartheid regime. Nelson Mandela said of him: “No white person has done more for South Africa.”

Religious figures have worked consistently with the party and been vocal opponents of its failures, something the ANC has criticised Archbishop Emeritus Desmond Tutu for doing. When the party came to power in 1994 this continued, but religion was kept out of public events.

The policy was encapsulated in the ANC’s 2007 RDP for the Soul discussion document. It said: “The ANC is not a religious organisation.” Instead, it called on the ideals of ubuntu – of a society working together for the benefit of people – to transform society. Religious institutions were key, but only in a complementary role to things such as education institutions. “The transformation of our society is a secular activity of the spirit of ordinary people, not reserved as religious activity for saints,” the document said.

Gerald West, professor of the school of religion, philosophy and classics at the University of KwaZulu-Natal, said Zuma dramatically changed this relationship when he came to power. This began with his accepting an invitation to address the 2009 Easter gathering of the International Pentecostal Church. “That he accepts an invitation to speak at the church itself is significant, as it is somewhat at odds with the orientation of the ANC’s RDP of the Soul document,” West said.

‘At home in the modern charismatic churches’
Zuma has since spoken at numerous gatherings of similar churches.

“He seems to be at home with the modern charismatic Christian churches,” said West in a 2010 analysis of Zuma’s religious interactions.

At a 2012 gathering of the Twelve Apostles Church in Durban, Zuma said churches should be the country’s moral compass. “It will please us if one day when you go wrong [the churches] will tell you you are going wrong and instruct you to correct your ways, so we can govern the people of God correctly.”

Who those churches are is being contested. A 2011 open letter by Kairos, a group of more than 300 Christian leaders, said its members – from mainstream churches – felt alienated under the new administration. Those now allowed into the ANC’s inner sanctum were those who supported the party, “especially during elections”, and were less likely to question the administration on thorny issues. The churches co-opted into the party were helping to drive a “state theology”, the letter said.

In 2012 the South African Council of Churches (SACC), with its undisputed struggle credentials, accused the country’s political leaders of having “largely lost their moral compass”.

Pentecostal church groups then came out in support of the president. The African Federation of Churches, a coalition of indigenous churches, held marches and said Zuma’s administration was “put in place by God”. The National Interfaith Council of South Africa, under McCauley’s leadership, said it was the duty of religious leaders, not politicians, to guide the country’s conscience.

The Mail & Guardian reported last year that ANC secretary general Gwede Mantashe told a meeting of the party’s national executive committee: “The SACC is of the view that the ANC is more comfortable with wealth, religion and those who are not critical of the ANC.”

The acting secretary general of the SACC, Bishop Malusi Mpumlwana, told the M&G last year: “There is a tendency of leaders wishing to have a prophet that speaks their language. To say, ‘yeah you are right’. We cannot have that.”

Rhema Church was unable to answer questions by the time of publication.