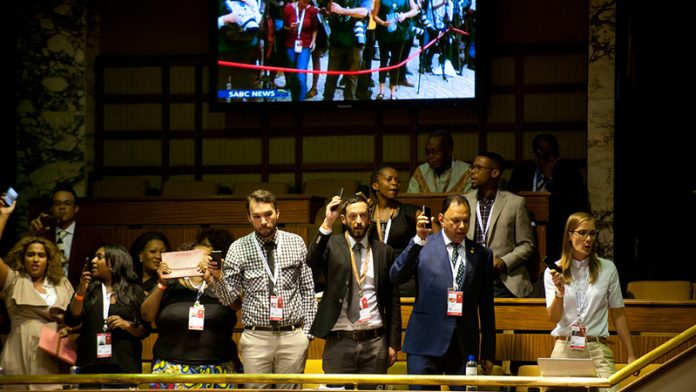 President Jacob Zuma assured editors on Friday that the jamming of cellphone networks in Parliament will not happen again.

“Rest assured that will never happen again and we did not know about it and we are condemning it. It was uncalled for,” he said after a meeting with the South African National Editors’ Forum (Sanef) at the presidential guesthouse in Pretoria.

Zuma said it was important that he met editors to make sure it did not happen again.

On February 12, before Zuma delivered his State of the Nation Address, journalists and some MPs protested that cellphone signals were being blocked in Parliament.

The signals were restored after National Assembly Speaker Baleka Mbete asked Secretary to Parliament Gengezi Mgidlana to look into the matter.

Sanef also made the president aware that editors had tried to talk to government officials before the start of his address, but that they “didn’t get positive feedback”.

“He was not aware of that and made it very clear that that should be criticised,” Mkhabela said.

“Government should be able to respond when concerns are raised and… we agreed that things should always be resolved the South African way, through negotiations and conversations …”

Taking Zuma’s word
Mkhabela said Sanef was happy with its discussion with Zuma.

Sanef had also briefed him on issues encountered in Parliament about the broadcasting feed. Sanef would meet Parliament’s presiding officers about this.

“There was no need for the president’s state-of-the-nation address to be disturbed, for the first time in history, because cellphone signals were not working,” Mkhabela said.

“It is an issue we could have addressed early, as he correctly pointed out, and it’s regrettable and will never happen again and we take his word for it.”

Zuma said the meeting also discussed the relationship between government and the media in general, and a number of issues were agreed on.

“We should better the relationship and be able to communicate as often as possible … We are all patriots of the country and we want to promote the country,” he said. – Sapa