State of the Nation: Why I couldn’t bear to watch this show of no leadership 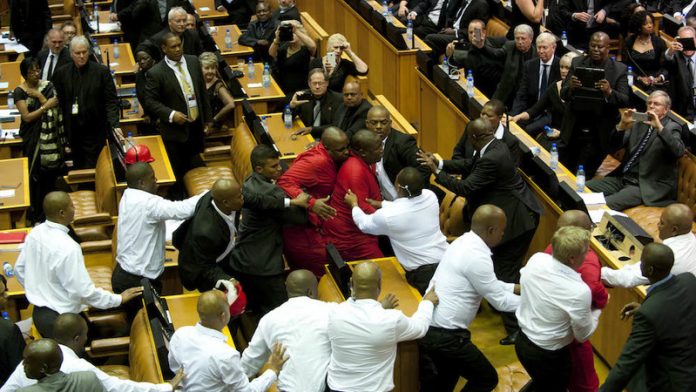 After the opposition parties walked out of Parliament, I switched off the television and did not watch the State of the Nation address – for the first time in a free South Africa. That act liberated me again.

In 1994, the ANC, led by Nelson Mandela, liberated us – and the African majority in particular. It would be unjust, I felt, to give the ANC permission to imprison us, again, after apartheid – that crime against our humanity.

So I protested by switching off the TV. It did not make sense to watch and listen to the president of my country, Jacob Zuma, after witnessing the injustices happening in Parliament before his eyes, in his silence, and before all of us.

“If you are neutral in situations of injustice, you have chosen the side of the oppressor,” said Archbishop Desmond Tutu. We boycotted and protested against the injustices of the apartheid system and with our votes we, the African majority, have returned the ANC to power since 1994. We didn’t do that to be oppressed.

On the morning after the address, Tim Modise’s Breakfast Show on Power Radio hosted the minister in the presidency, Jeff Radebe.

An African sister called from Sandton and told Radebe that her mother took her to the Union Buildings for Mandela’s inauguration when she was just seven years old and sold her the idea of the ANC. She told him that, the night before, she was watching the address with her seven-year-old son, and all the president did, after we had witnessed those injustices in Parliament, was to continue his address – “before I was interrupted,” he began, and qualified it with a laugh.

The nation saw leadership in Mandela’s reply to then-president FW de Klerk on July 9 1992 at the Convention for a Democratic South Africa (Codesa). It was live on tv. Mandela said: “It is unfortunate that your reply has not addressed the issues I raised in my memorandum of the 26th June, 1992. Instead, you deliberately obscure matters. It appears that we are all agreed that South Africa faces a serious crisis. When it comes to charting a way out of the crisis, however, it is clear that there are hardly any points of convergence.

“This is particularly so because you have chosen to elevate a number of peripheral issues to the status of ‘fundamental’ ones, while relegating those of critical significance to a secondary place. The matter is made worse by the factual inaccuracies, distortions and blatant party political propaganda involved in the manner in which you raised these so-called fundamental issues.”

There was no leader in Parliament on Thursday evening to stand up and answer the simple questions the opposition parties were asking. It is that simple.

In the State of the Nation address 2015, the youth leadership of Julius Malema and Mmusi Maimane symbolised Mandela and the ANC represented De Klerk in that Codesa event.

The youth drive change; they are a force for progress all over the world. Learn from your history: Soweto 1976; the generation of Mandela and Mangaliso Sobukwe, who formed the ANC Youth League in the mid-1940s; the Pan Africanist Congress in the late 1950s; and, of course, Bantu Biko and his generation of conscience.

To the ANC, one can only say: “You deliberately obscure matters … You have chosen to elevate a number of peripheral issues to the status of ‘fundamental’ ones, while relegating those of critical significance to a secondary place.”

Nkandla is not only a bone of contention for the Economic Freedom Fighters. Nkandla is a problem for all South Africans. Nkandla is of critical significance and you, ANC, are relegating it to a secondary place. No one was in charge in Parliament on Thursday evening. Don’t lie to yourselves. The injustices witnessed in Parliament remind us of the moment of liberation in 1994 when Mandela told us in a speech: “If the ANC does to you what the government of the National Party did to you, you must do to the ANC what you did to the government of the National Party.”

Martin Luther King Jr said: “The hottest place in hell is reserved for those who remain neutral in times of great moral conflict.” We cherish these freedoms; we can’t afford to be neutral. As Bob Marley sang: “Rise, oh fallen fighters, rise, and take your stance again.”

Dr Neo Lekgotla laga Ramoupi is writing as an activist and her views expressed here do not represent any organisation.

It appears that those tasked with enforcing the law don't know it.
Read more
Opinion

The chief justice needs to publicly account for his comments, by either walking them back or explaining his change of heart on international law and its institutions
Read more
Coronavirus

UIF delays are making me Ters

We can gamble and eat out and one day gwais will be legal, but staying pozi is best — the virus is gaining on us, writes Paddy Harper
Read more
Opinion

We just have to ask ourselves if we are as willing to sacrifice to save our grandchildren as we have shown ourselves to be when it came to trying to save older people, the sick and the poor from Covid-19
Read more
Opinion

How racism is an essential capitalist tool