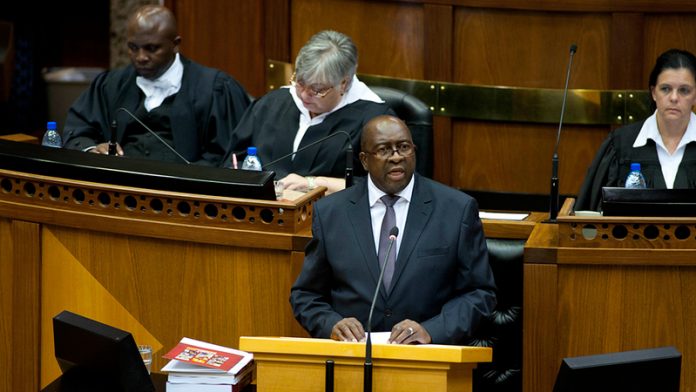 “Even after lowering our expenditure ceiling … there is a structural gap between our revenue requirements and projected tax proceeds,” he said. “To bridge this gap we require additional revenue.”

And thus it became the onus of Nene, in his very first national budget speech, to outline a grim list of tax increases.

“Personal income tax rates will be raised by one percentage point for all taxpayers earning more than R181 900 a year,” he said. This means an extra R21 per month for those taxpayers earning R200 000. For those earning R500 000, it means R271 more per month. And for anyone earning R1.5-million a year, the increase is R1 105 per month.

“The net effect,” said the minister, “is that there will be tax relief below about R450 000 a year, while those with higher incomes will pay more in tax.”

“This additional two cents per kilowatt hour will be withdrawn when the electricity shortage is over,” said the minister.

For a household that uses 500 kilowatt hours in a month, this means an increase of R10 per month. “We think it is a very small increase per user but it can have quite a large impact,” said a treasury official.

“The subsidies for solar geysers, for example, will be paid for through these revenues.”

Sin taxes increase
Motorists will pay an extra 30.5 cents per litre thanks to an increase in the general fuel levy, starting in April.

Sin taxes are, predictably, also on the up.

• A bottle of wine will increase by 15 cents

• A bottle of sparkling wine goes up by 48 cents

• A pack of 20 cigarettes will cost an additional 82 cents.

A 50 cents per litre increase in the Road Accident Fund levy was also proposed. “This is a substantial increase from the present levy of R1.04,” acknowledged the minister. This amount is required in order to clear the current claims backlog, which has accumulated a R98-billion unfunded liability.

The effect of the proposed tax increases will be an additional R8.3-billion of additional revenue in the 2015/16 – about 10.4% more than the 2014/15 tax revenue. It will help bolster lower than expected company income tax revenues in a period of lethargic economic growth, with Treasury revising this year’s GDP growth estimates down from 2.5% to 2%.

The minister did not propose an increase in value added tax (VAT) , a move that was highly speculated as this has not seen an increase in the past 20 years. However, a VAT increase would not be in line with Nene’s stated aims to consider the financial health of households as a primary consideration: VAT increases hit poorest households the hardest.

Tax relief for some
Instead, the proposals gave flavour to Nene’s proclivity for progressivity in the tax structure. And in a nod the creation of a more equal society, tax reprieve was offered to some.

“A more generous tax regime is proposed for businesses with a turnover below R1-million a year,” said Nene. “Qualifying” business with a turnover of less than R335 000 a year will pay no tax. The maximum tax rate has also been reduced from 6% to 3%.

And a one-year relief measure in respect of Unemployment Insurance Fund (UIF) contributions will also be introduced. “The UIF has an accumulated surplus of over R90-billion. It is … possible to provide temporary relief to both employers and employees,” said Nene. He proposed that the contribution threshold be reduced to R1 000 a month for the upcoming financial year.

“This means that employers and employees will each pay R10 a month during the year ahead, putting R15-billion back into the pockets of workers and businesses.”

‘Rebalancing’ the economy
Undoubtedly mindful of the country’s fiscal slippage and the ever-looming threat of another sovereign credit rating downgrade, Nene’s rhetoric was aimed at restoring investor confidence and underscoring the need to consolidate public finances.

He outlined a few cost-containment measures, allowing for the procurement of goods and services to grow by a maximum of 5% a year. Spending on catering, entertainment and venues will be slashed by 8% a year, while travel and subsistence budgets will decline by 4% a year.  Overall, a R25-billion reduction in budgeted expenditure is planned for the next two years.

Within the outlined framework, the budget deficit is projected to be 3.9% of the gross domestic product; which is 0.2% less than was anticipated. Overall government expenditure will raise by 2.1% this year.

“Our fiscal rebalancing has included cost containment measures and intensified efforts to improve efficiency in expenditure. These measures are yielding positive results.”

But the underlying difficulties – both structural and environmental – persist. “This has been a challenging budget to prepare, under difficult economic circumstances,” he said. “Our economic growth initiatives have to be intensified.”