Halaal tourism in the Winelands 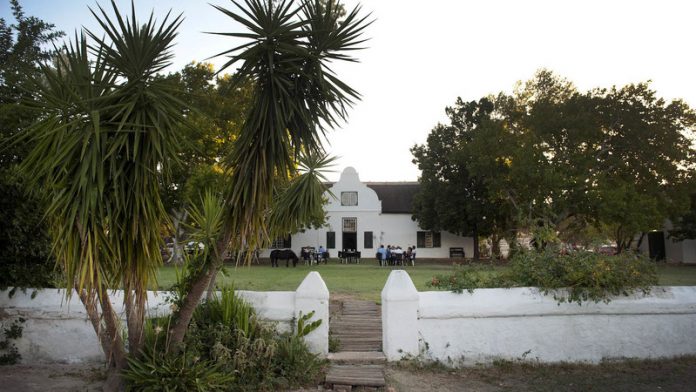 Inside the leather-bound book Majied Moerat is carrying are a series of black, curvy Arabic letters seemingly embossed rather than typed on to yellowing pages, line after line.

In the 1860s when the Islamic scholar Shaykh Abu Bakr Effendi was sent to the Cape by his Turkish sultan to teach Malay slaves their faith, he was faced with an obstacle: they could only speak Afrikaans.

So Effendi studied the language and compiled the Bayaanuddeen (Uiteensetting van die Godsdiens, or in English, Exposition of the Religion), a famous book laying out various Islamic teachings in Afrikaans, but using the Arabic script.

And so he became one of the most important contributors to Arabic Afrikaans, which originated in a madrasa (place of religious learning) in the Cape in the 1830s.

Moerat owns one of the few remaining original copies of the book, given to him by an elderly member of the Malay community.

Moerat (31) is the youngest of three brothers. After returning from Saudi Arabia where he mastered the Arabic language, he spent 12 years working in the hajj and umrah (pilgrimages Muslims undertaken to Mecca in Saudi Arabia) industry, before his brothers Areef (37) and Khaashief (36) – both recovering substance abusers – approached him for help, wanting to open a centre to assist people in overcoming addiction.

Majied Moerat and his family are now in charge of running Roggeland. (David Harrison, M&G)

And so De Perel Safe House for Substance Abuse was born three years ago, in a building leased from the South African Heritage Resources Agency (SAHRA) in Dal Josafat in the heart of the Paarl Wineland.

En route to De Perel the brothers would drive past Roggeland Country House, an 18th-century Cape Dutch farmhouse, also situated in Dal Josafat, a few hundred metres away from the safe house. The property was declared a national heritage site in terms of the National Heritage Resources Act of 1999 because of its idyllic setting and rich history.

The Moerats successfully submitted a proposal to the SAHRA to take over the running of Roggeland and so began what is by no means an easy task. The property had been shut down for four years: “It had been vandalised, there was no plumbing, there had been no irrigation – the shutters had been vandalised,” says Khaashief.

Then there’s the fact that the Moerats are Muslims and Paarl is a winelands town where the main tourist attraction is the wine-producing estates. But this is partly why they jumped at the opportunity, says Majied: “There is a market for halaal tourism here … people from the Arab world flood Cape Town during our winter and part of the aim is for Roggeland to be a tourist site.”

Paarl – founded in 1687, making it the third oldest settlement in South Africa – also enjoys a rich historical heritage, particularly in the development of the Afrikaans language. Exhibits at the Afrikaans Language Museum in Pastorie Avenue aim to inform visitors about the history and diversity of the language, and the Taalmonument was erected on Paarl Mountain in 1975.

A number of farms and buildings in Dal Josafat form part of the Language Route because they are linked to the struggle for the recognition of the language. This is where Effendi (who was married to one of the Moerat family’s ancestors) comes in. “We can make Roggeland a multicultural site, where the link between the two languages can be explained,” says Majied.

On their side, the Moerats also have breathtaking natural scenery provided by the Drakenstein and Paarl mountains. Sunrise and moonlit nights are mesmerising in this setting. There isn’t a shortage of activities to keep the guests occupied either. A delightful little swimming pool marks a corner of the property, and some horses and ponies roam about freely while guests enjoy breakfast under shady trees outside their cottages.

Meals – prepared in the kitchen of the manor house by the family matriarch, Aunty Doreyah, assisted by her daughter Wisaal – are a simple but delicious affair (steak and chips, butter chicken and puri, chicken curry and rice to name a few), and range from Cape Malay to Indian. “It depends on what people want,” says the Aunty.

The accommodation at Roggeland is a work in progress and Majied rates it as a one and a half star (“No TV, no air-conditioning, no wi-fi”), but the hospitality more than makes up for it. A group of residents from the rehab are on standby to make sure guests have everything they need, and they are ever obliging.

At De Perel, Areef decides when someone is ready to work at Roggeland. Duties entail everything from assisting guests with their luggage and tidying rooms to making tea, serving meals, baby-sitting and braaing meat for day visitors. “We wanted to create jobs and provide a platform for skills development for the guys who come to the rehab,” explains Khaashief. “We don’t just want to let them go home – they need to be reintegrated into society first.”

For the residents of De Perel, this interaction with the outside world constitutes a reality check as well as an opportunity to set the record straight. “We tend to forget where we come from – there is a stigma attached to addicts outside,” says Yusuf. “That addicts aren’t nice people. By doing this we are trying to change people’s mindsets. When people come here, at first they don’t know that we come from the rehab. When they find out, they say, ‘No way’ – but the trust is something we need to work for [at the rehab].”

To book a day visit or to stay at Roggeland Country House, contact the Moerat family at 072 247 5213