Hot dissent over Christmas in Qatar 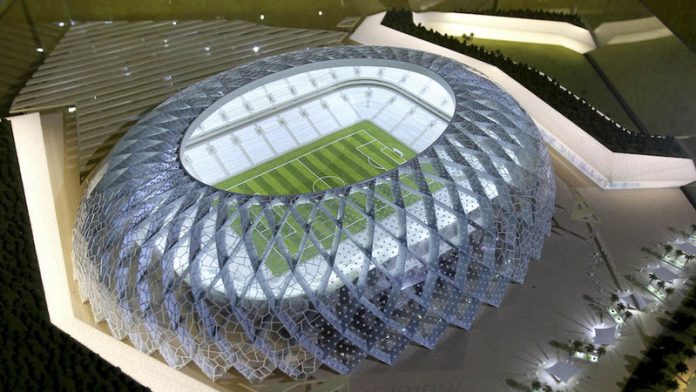 Either way, in confirming the 2022 World Cup will start in late November in the tiny Persian Gulf state of Qatar to avoid searing heat, a Fifa task force has turned the global sporting calendar upside down.

A switch to winter for the first time since 1930 had appeared inevitable from the moment, in December 2010, when Fifa’s president Sepp Blatter shocked the world by announcing Qatar would host the tournament, given June temperatures that regularly top 50°C and the attendant risk to players and fans.

The decision was announced in Doha by a task force set up by Blatter in 2013 after a backlash from European domestic leagues, broadcasters and other sports angered by a lack of consultation.

It said an alternative option of playing the tournament in January and February had been discarded because it clashed with the 2022 Winter Olympics, whereas Ramadan and the summer heat made most of the rest of the year unacceptable.

A proposal from the biggest European clubs and leagues to play the tournament in May was rejected.

Only viable option
Blatter and Fifa secretary general Jérôme Valcke have favoured November from the start. The tournament will begin on November?26 and finish with the final on December 23. By the logic of Fifa, the move prompted by the outlandish choice of Qatar as the host has been presented as though it is the only viable option.

The Bahrainian task force chairperson, Sheikh Salman bin Ebrahim al-Khalifa, said: “We are very pleased that, after careful consideration of the various opinions and detailed discussions with all stakeholders, we have identified what we believe to be the best solution for the 2018-2024 international match calendar and football in general.” He said the move had been backed by all six continental confederations, including Uefa.

Many from outside Europe have argued that more flexibility needs to be introduced into the international sporting calendar to allow events such as the World Cup and Olympics to be staged in new places.

But critics have repeatedly countered that the 2022 tournament was voted for on the basis that it would take place in the traditional summer slot. Qatari organisers have claimed throughout that they were prepared for either eventuality and were developing special air-cooled stadiums.

The organisation that represents Europe’s professional leagues immediately claimed the decision would “cause great damage” to the fabric of their competitions. The European Club Association, which represents scores of teams from Barcelona to Manchester United, said it would press for compensation.

The decision, to be ratified by Fifa’s executive committee next month in Zurich, will play havoc with the traditional English Christmas programme and is expected to have a knock-on effect on the seasons either side. Richard Scudamore, the Premier League chief executive, who is a member of the task force and was present in Doha, said he was extremely disappointed with the process and believed the views of the European leagues had not been given serious consideration.

“Our particular concern is that a World Cup that finishes late in December could result in damaging one of the English game’s great traditions and attractions, with the removal of the entire Premier League, Football League and FA Cup Christmas and New Year fixture programme that season,” he said.

His German counterpart, Andreas Rettig, said the decision would be an “organisational as well as a financial burden for European leagues” and the Association of European Professional Football Leagues said it would “perturb and cause great damage to the normal running of domestic competitions”.

English Football Association chairperson Greg Dyke said that in an ideal world the World Cup would never have been played in Qatar but that moving it to November was now the least worst option. “I have said from the start we cannot possibly play in the summer in Qatar. It would be ridiculous to play then,” he said.

Asked about the final being held as late as December 23, Dyke said he would “try to protect all the traditional Christmas dates”. Fifa’s own inspection reports, largely ignored by the 22 members of the executive committee who voted for Russia to host in 2018 and Qatar in 2022, said summer temperatures in Qatar were a “high risk” factor. Within 24 hours of the vote, some on the executive committee had begun to talk about moving the tournament to winter.

Disputed summary
The controversial dual bidding process, marred by allegations of cronyism, collusion and corruption, has long been the subject of intense scrutiny. But following the publication of a disputed summary of a report by Fifa’s ethics committee, world football’s embattled governing body declared there was no basis to strip either Russia or Qatar of the World Cup.

Qatar’s World Cup organisers, engulfed by a barrage of criticism over everything from the rights of the country’s 1.4-million migrant workers to the manner in which it was won, hope the decision will prove to be a line in the sand.

Blatter, too, hopes it will quell one area of controversy as he bids to be re-elected as Fifa president for a fifth term in May – despite having previously promised to stand down. – © Guardian News & Media 2015

The English winger, who now has 17 goals and 17 assists in the Bundesliga this season, joined a host of protests in the German top-flight over the weekend at the death of an unarmed black man in the United States
Read more
Advertising
Continue to the category
Opinion