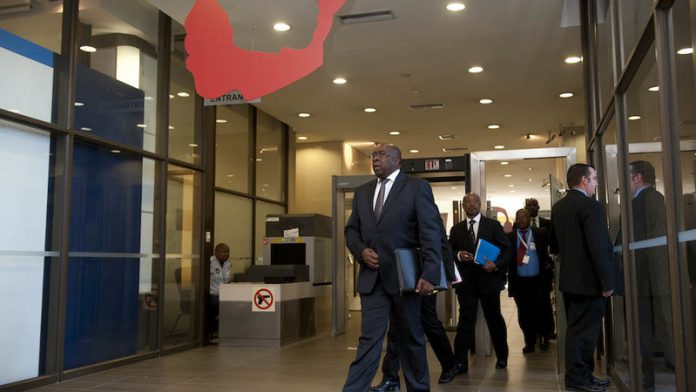 Nhlanhla Nene’s budget speech offered no trade-offs or promises of better times. Instead, he implored South Africans to work together in battening down the hatches, but it was clear he could not offer many financial solutions in the face of a political leadership vacuum.

The finance minister managed to keep the wolves at bay with small changes, which will raise the additional R17-billion needed for the year. But otherwise his 2015 budget was hamstrung by much graver issues, such as the energy crisis, the ailing parastatals, the public wage bill and historically high debt levels, all of which the treasury has little power to resolve.

The novice Nene appeared nervous when he took to the podium on Wednesday, but he grew in confidence as he delivered his carefully crafted speech.

“This has been a challenging budget to prepare, under difficult economic circumstances,” he said. “The resources at our disposal are limited. Our economic growth initiatives have to be intensified.”

Several measures he announced were widely perceived as positive. These include cutting government spending on items such as catering, entertainment and travel and increasing the budget for critical items such as school books and medicine – plus an upward adjustment of monthly social grants, and an indication of further adjustments in October should inflation rise.

There are tax breaks for small businesses and the transfer duty on properties valued at R750 000 or less has been done away with. He also proposed a temporary reduction in Unemployment Insurance Fund contributions.

His most unpopular moves were to raise personal income tax by one percentage point for taxpayers who earn more than R181 900 a year and to add 84c a litre to the fuel levy.

Damage control rather than problem solving
Although energy constraints were highlighted as a major issue, Nene’s budget demonstrated an inability to do much about it. A rescue package for Eskom, announced in November, remains in play but not much new was on offer – not even an assurance that there is light at the end of the tunnel. The power problem appears to be insurmountable, at least until the megaprojects Medupi and Kusile start delivering. The creation of the ministerial war room indicates the focus is on damage control rather than problem solving.

Measures to reduce energy demand, such as an increase in the electricity price, have been proposed. But as the global services firm Nomura noted: “We find it odd that the government is making an additional electricity levy to reduce demand – a sign there is no immediate fix for the energy security crisis.”

Another daunting challenge is the public sector wage bill, which Nene hopes to keep at 40% of spending. The budget has factored in an inflation-related hike for public servants, while the unions have demanded 15%.

Nene’s speech spoke about reducing workplace conflict, but it’s anyone’s guess how the government and unions will see eye to eye on this without throwing the budget out.

“The wage bill will be keeping Nene awake at night,” an economist at the Efficient Group, Dawie Roodt, said. “Without a doubt, that is a political issue. You have one leg of the tripartite alliance, the unions, saying 15% and the other leg, government, is saying no.”

Political pressure would certainly also have had a hand in Nene’s tax decisions. Many economists said raising value-added tax would have been the easiest way to raise additional revenues – if only it wasn’t so politically impossible.

No commitment to lower debt
Nene announced the intention to lower government debt, which is a big concern for credit-rating agencies. “Although the treasury is trying to stabilise the level of debt to just below 50% of GDP [gross domestic product], there seems to be no commitment to lower it from that level, which we view as a negative,” Nomura said.

Roodt said Nene’s budget speech was the least transparent he had heard in many years. Matters such as privatising the parastatals were alluded to, but no details were given, which left everyone wondering what assets would be sold in order to prop up Eskom.

“But my main concern is this is not a budget; it a wish list,” said Roodt. He said Nene had been far too optimistic about numbers such as economic growth and expected revenues.

Nene said the economic growth forecast for 2015 had been revised down from 2.5% to 2%. This is indeed better than the 1.6% growth projected by the likes of HSBC, but lower than the last forecast of 2.1% by the International Monetary Fund.

The treasury’s projection is that consolidated budget revenue for this year will be R1.091-trillion, or about 8.2% more than the 2013-2014 financial year.

“With government expenditure, he expects to be able to keep a lid on it, but I don’t think that is going to happen,” said Roodt. “And even with his numbers, debt levels are going to get out of hand.”

Nene was no Trevor Manuel, the former finance minister, said Roodt. “He’s not the guy to dish out the bad medicine. He just doesn’t have the political backing.”