A tireless fighter for human rights 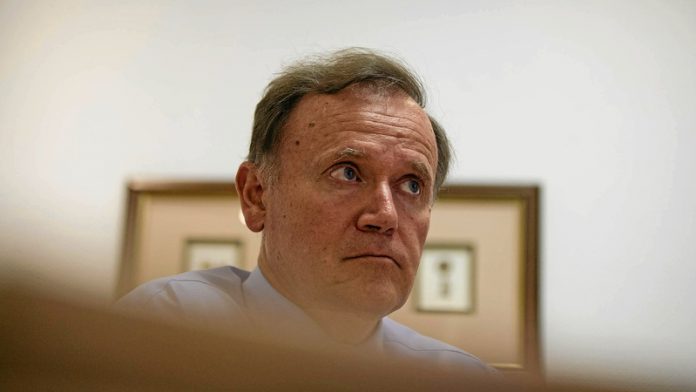 “My years at the Legal Resources Centre [LRC] were hard — Phola Park, Swanieville, Boipatong … All our clients who were civil leaders were assassinated [during the 1980s and 1990s]. It was a very violent period,” human rights lawyer Moray Hathorn recalls.

“It was overwhelming for a boy from a farm in KwaZulu-Natal. I was just not prepared psychologically for what we experienced — unlike  George Bizos and Arthur Chaskalson and student activists like Paul Pretorius, Thandi Modise and former National Union of South African Students members Geoff Budlender, Charles Nupen, Thandi Orleyn and Karel Tip, who just accepted this was how it was.

“They were tough and used to this.”

In an interview room at Webber Wentzel’s head office, Hathorn sits forward earnestly in his chair. It is clear he is quickly taken back to a time that still haunts him.

The first case he recalls involved Themba Dlamini, the head of the South African Students Congress in the area, who was found hanging from a beam in the Driefontein house of a government-appointed chief, Samuel Yende, some 25 years ago. Dlamini had been objecting to the forced removal of residents. After being told of his death, Hathorn went on to establish the cause.

“A district surgeon told us that Dlamini’s injuries were minor and that he had choked on his own vomit.

“We immediately got the body up to Johannesburg, where Patricia Klepp, who was then the assistant to [renowned pathologist] Dr Jonathan Gluckman, had a look. She said she had never seen such severe injuries. She counted 77 blows. He had died of a subcutaneous haemorrhage.”

Another case that stands out occurred in Phola Park, east of Johannesburg, where residents were constantly facing eviction. In 1992, community leader Prince Mhlambi was murdered “by faceless people”.

“Geoff Budlender [a human rights and constitutional lawyer who at that stage worked for the LRC] was very much involved there. I don’t think the case was ever closed.”

There is another incident Hathorn remembers vividly from that time: “In Swanieville [near Kagiso on Johannesburg’s West Rand], where the LRC was involved in getting the place upgraded and renamed, one of the people on the negotiating committee, a teacher if I remember correctly, was shot to death.”

Hathorn says little changed after the release of Nelson Mandela in 1990. “In fact, if anything, things were more violent. It was during this period that the war between the ANC and Inkatha intensified.”

Hathorn, who moved to the LRC in 1988, was doing his articles at Webber Wentzel when he met respected lawyer Gilbert Marcus. “He was good at getting law firms to assist and had convinced Webber Wentzel to take on some human rights issues,” Hathorn recalls.

Hathorn returned to Webber Wentzel from the LRC in 2003 to head its pro bono unit, which he still does.  During his tenure at the LRC, he  survived two attempts to have him charged and received two death threats. Despite these challenges, the centre’s lawyers were expected to deliver.

“Well, people like George [Bizos] never gave up. He was fearless. He believed cases were there to be won and that was all.”

Hathorn admits that he took the death threats seriously, particularly the second warning, which came through a landless chief. “He approached me and said: ‘You must be very careful.’?”

Asked about the judiciary during that period, Hathorn says: “On the whole, the judges were good. Look at Kees van Dijkhorst in the Oukasie case, where government was trying to evict residents [of the ramshackle township near Brits in 1988].

“He had convicted Chaskalson’s clients in the Treason Trial but, in this case, he ruled in favour of the Oukasie committee against government.”

After the years of turbulence came the “relief” of 1994, says Hathorn. “Peace literally broke out.”

During the elections that year, LRC members were attending a conference. “After it was clear the African National Congress had won the election, Chaskalson said: ‘Well, this is a fundamental change’, before walking off without another word.

“I think Arthur was consulted in the period leading up to the elections, but he would never have discussed it with us junior lawyers.”

The violent political struggles began to abate, but land issues continued to plague South Africa. This was Hathorn’s focus for many years, but he is now concentrating mainly on women’s rights.

“There are some issues around  [housing] that still hang over from the Eighties when the Abolition of the Influx Control Act [which repealed pass laws] came into effect. In Ekurhuleni and Johannesburg, the informal settlements have been there since the 1980s. There are still 180 informal settlements, involving roughly 200 000 households, in these areas. The number of people still living in shacks in [those areas] is still extraordinarily high.

“I remember when the Act came into effect in 1986, it was an important development and I was talking to a clerk with the now South Gauteng deputy judge president Phineas Mojapelo, and he came in and said: ‘The sun will still come up tomorrow,’?” Hathorn recalls with a chuckle.

Hathorn spent much of his time at the LRC travelling to far-flung settlements to take up their causes and sleeping in the homes of community leaders and activists, a practice that became more difficult as his family grew.

He has been recognised in the centre’s oral history project by several lawyers who worked under him there, first as a senior lawyer and later as the director. Supreme Court of Appeal Judge Mahomed Navsa, who worked at the LRC, recalls his time with Hathorn fondly. “I did a lot of work for Moray Hathorn. Moray is so good that he makes [Mahatma] Gandhi look bad. He really is a good guy.”

Yet it is the failures rather than the successes that Hathorn recounts, despite the victories clocked up by the LRC and Webber Wentzel in many cases that created precedents in land law.

He refers to a case in which he was part of efforts to prevent the eviction of the residents of Protea South in Soweto by the City of Johannesburg because they were settled on dolomitic land.

The case started in 2008 and the Johannesburg high court ruled in March last year that the city could not demolish any residential structures in the area. The city was also ordered to provide interim basic services such as communal water taps within 200m of each household, one chemical toilet for each household and high-mast lighting.

The ruling was also made in the light of a new standard adopted by the Council for Geoscience that addresses the redevelopment of dolomitic land.

When the city failed to report back to the court about its progress a month after the ruling, an application was brought before the court to find the city in contempt.

“They then said they had only just been made aware of the standards Act and that they would need to create a whole new department to deal with it,” says Hathorn, clearly frustrated.

“These are the types of stumbling blocks and technical fights undertaken with municipalities.”

Hathorn also returned to the Lohatla army battle school in the Northern Cape, where he had done his military service, to represent communities living on the land who were being forced to move.

Two communities living on the land formerly known as the Maremane and Gatlhose native reserves were removed, but a third, the Khosis, remained for a while until they, too, were forced to leave. The communities were all related to the Batlharo tribe that had originally occupied the land. In preparing for the case, Hathorn recalls that he arrived at the house of the chief in the area to obtain a confirmatory affidavit. “It was 10pm and it was with great trepidation that we knocked on his door. When the door opened, he said: ‘I have been waiting to see you for 20 years.’?”

It is clear that moments like these have sustained Hathorn over the years.