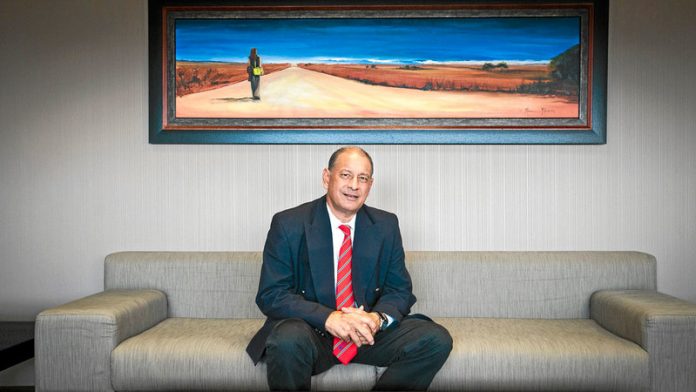 ‘The mechanic”: this is how acting vice-chancellor Lourens van Staden describes himself after throwing a lifeline to 5 000 students at the Tshwane University of Technology (TUT) in Gauteng. They were all facing exclusion because they still owed the ­university fees, and were in debt as a result.

Van Staden wanted to save these students, who all come from poor families, from leaving TUT without graduating, he said when he sat down with the Mail & Guardian in his Pretoria office, late on Wednesday afternoon.

Earlier in the week, he had announced his agreement with TUT’s student leadership to end the boycott of classes, which had forced the university’s Soshanguve campus to close for three weeks.

He approached the students’ representative council (SRC) to negotiate a solution for the returning students, who had not been allowed to register because of debts accrued from last year. An allocation to TUT from the state’s National Student Financial Aid Scheme (NSFAS) that was cut by more than R150-million this year compounded matters, Van Staden said.

But NSFAS “did not cut TUT’s allocation,” said its spokesperson Kagisho Mamabolo. “You would recall that in 2014 … we managed to obtain an additional allocation of R1-billion. Subsequently, TUT’s 2014 allocation included R270-million from the R1-billion, which was a once-off allocation. That is why in 2015 the allocation excluded that portion.”

Marathon negotiations ensued. “I’m like a mechanic,” Van Staden said. “I went there [to negotiations] to get my hands full of oil and grease … I burnt the midnight oil, and we found one another. We have a real solution: it’s not a bogus solution.”

The negotiated agreement entails TUT releasing R16-million from its merit bursary programme to 500 of the excluded students.

Rich families
“I said to myself: ‘Let’s reallocate this R16-million to students who are financially needy.’ Most of the students who are excelling [and have merit bursaries] come from rich families. They have all the support. And so, let’s move the [bursary] money to where we need it most.”

The negotiations resulted in a “special dispensation” for about 700 final-year students, Van Staden said. Regardless of their debts from last year, the students will be allowed to register after paying the institution’s R1??500 registration fee.

The university has agreed to the same arrangement or a further 3 800 returning students regarding their registration fees. “Remember, I’m breaching the university’s student debt management policy. That policy says that, when you want to enrol in a particular year, you need to cover all your previously incurred debts. But I said, ‘Let me be progressive.’ Remember that all those 5000 are academically deserving. And if you are poor, how do I exclude you from education? That’s wrong.”

Van Staden will “face the music” in TUT’s council. The council appointed him and he reports to it.

But national policy forbids him to enrol students without their paying upfront the minimum they owe.

“I couldn’t enrol them with zero payment,” he said. “Even the [higher education] minister can deal with me …” The students who took Van Staden’s lifeline will now manage to save up for registration, but then battle to afford textbooks, accommodation, food and tuition fees (“When learning’s door gets bolted for students”, M&G, February 20).

Fund-raising
But there is a plan to sustain them, Van Staden said: “Between ourselves [management], the SRC and our advancement office, we’re going to put a plan together to raise funds [like the University of the Witwatersrand’s recent and ongoing efforts]. We’ll establish a bursary fund for our needy students.”

He has already signed a debit order, for an amount he declined to disclose, which he will deposit into the fund from his salary every month for a year. “It might be a drop, but I want to encourage others to contribute.”

The president of the SRC, Tsholofelo Modise, who led the students during negotiations, said the university’s management would not have rescued any students if they had not held protests.

“Truth be told, corporate entities are by their very nature profit-driven and they want to make as much money as possible,” Modise told the M&G.  “They are not in the business of forking out money. So student leadership played a pivotal role in what became the deal, as it were.”

But he added: “Credit to Van Staden. He showed he is a progressive leader. He understood where we were as students. That’s why he made these concessions.”