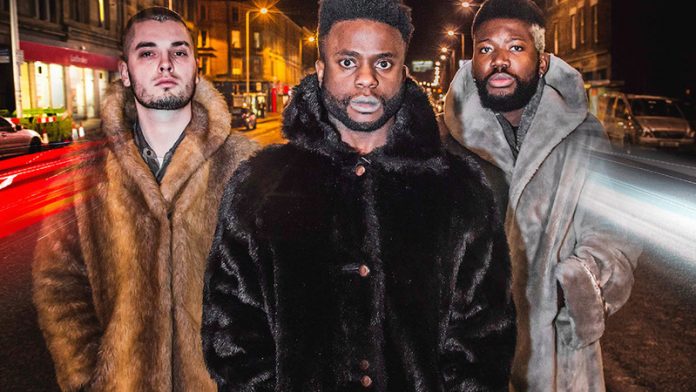 Four months after they took home the Mercury Music Prize, Young Fathers have confirmed details of their new album, titled White Men Are Black Men Too. Out on April 6, the Edinburgh group follow the success of Dead with their second full-length album, released one year after their debut album.

The album promises to be Young Fathers’s “interpretation of what a pop album should be”. It was conceived during their world tour last year, on which the trio found themselves recording anywhere they found possible: in a hotel room in Illinois, a rehearsal space in Melbourne, a cellar in Berlin, a photographic studio in London and their “normal hole-in-the-ground basement” in Edinburgh.

Pre-empting the reaction to the album’s provocative title, Alloysious Massaquoi of the group shared an email exchange between members of the band and their management, which goes some way towards explaining the impetus behind the album title.

“I’m aware of the points we’ve discussed but all that sounds like to me is we are trying to cater to what other people might think, as if it’s a negative thing, which it’s not. We came at it from a different angle, a positive angle. It’s got issues of race and so what? Why should alarm bells start ringing, even though in general conversations race, politics, sex and religion are always the subject matter? Why should it be discussed behind closed doors and never confronted head-on?

“How do we help tackle one of the biggest hindrances in people’s lives and the world … by not putting the question forward and not letting people debate positively or negatively about the statement?

“Motown Music helped change the world, made it acceptable for blacks to be on radio and seen on TV; MJ [Michael Jackson] did it too. Martin Luther King wanted equality and achieved it to some degree. But, after all that, are things equal in this world? Fuck no. I still want to ask for it [equality] backed with the best music we’ve ever recorded. A pop album, our interpretation of what a pop album should be.

“Weight with words, which is the title plus the pop sensibility of the songs [respectively].

“I wanna stand for something I helped make. Folk will complain about absolutely anything … Even if it’s from the purest of intentions, you just can’t win. We don’t make music to please other people or write certain lyrics to do so, either. Why start now?

“When the title was first put forward everybody was excited and 100% there was no fear. That same commitment needs be carried on to make it work despite worries after it’s been digested.”

Young Fathers are “G” Hastings, Massaquoi and Kayus Bankole, who formed the band in 2008 after meeting at an under-16s hip-hop night in Edinburgh.

They put out two previous mix tapes before Dead, an album described by the Guardian as a “strange and intoxicating musical universe that feels entirely their own”. – © Guardian News & Media, 2015

Lake of Stars festival: a party with a purpose

Could fatherhood be changing for the better?