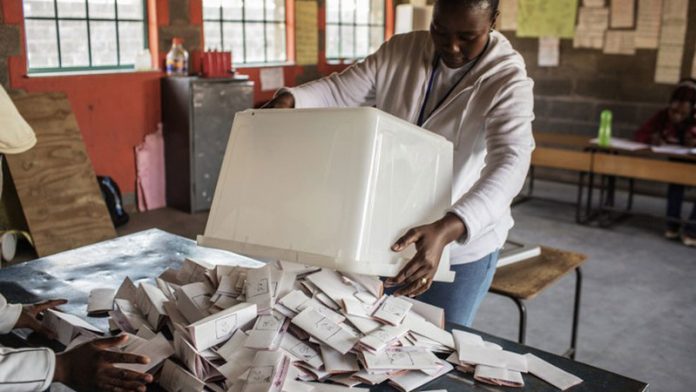 Saturday’s parliamentary poll, which was called two years ahead of schedule, passed without incident according to observers.

But hampered by manual counting and Lesotho’s mountainous terrain, the results were slow to come in Sunday.

The small mountain kingdom has been in crisis since June 2014, when Thabane suspended parliament to avoid a motion that would have seen him ousted from power after his fragile coalition government fell apart.

Thabane described the violence as a coup attempt fuelled by the opposition and fled to neighbouring South Africa.

Both the military and opposition denied any bid to seize power.

Observers from both SADC and the African Union have been monitoring the election, and 475 police from neighbouring countries have been deployed to keep the peace.

The army was confined to barracks during Saturday’s vote.

Counting closed at 7pm on Sunday, with 47 of the 80 constituencies up for grabs officially declared by the Independent Electoral Commission (IEC).

Thabane’s All Basotho Convention took an early lead with 35 seats.

The Lesotho Congress for Democracy party of Deputy Prime Minister Mothetjoa Metsing, whose differences with Thabane fractured their coalition, had two seats.

Lesotho has a mixed parliamentary system. Eighty lawmakers are voted into power by their constituents, while another 40 seats are distributed proportionally after the final results to ensure all parties are represented in parliament.

A party needs 61 of the 120 seats available to rule without being forced into a coalition.

Before the vote, analysts warned that an outright win by a single party could result in violence – particularly if the winner was the prime minister’s All Basotho Convention party (ABC).

The capital Maseru, an urban stronghold for Thabane, remained quiet on Sunday.

Political posters had been taken down days before and the usually busy city centre was calm.

But as the city’s results were announced in the ABC’s favour, a convoy of supporters made their way through the streets in yellow party T-shirts, honking their horns and waving flags.

“In Lesotho, we don’t count the votes electronically, we count them manually,” IEC official Rethabile Pholo said of the slow count.

He said the process was made more difficult by Lesotho’s mountainous terrain, often requiring the use of helicopters.

Earlier, the IEC had said helicopters had been able to reach all of the most remote districts. But by late on Sunday they said the weather had hampered some operations and several results were still to be collected from the most isolated areas.

About the size of Belgium and completely landlocked by its larger neighbour South Africa, Lesotho is one of the world’s poorest countries with its economy heavily dependent on South Africa, to whom it exports water and hydroelectric power. – AFP