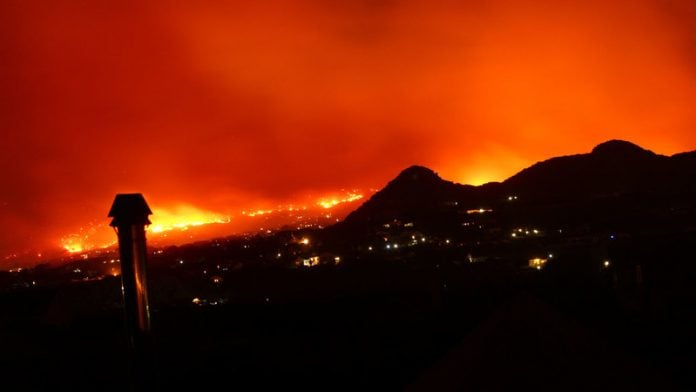 Eight homes were damaged and 300 people evacuated as firefighters continued to battle a blaze that started in Muizenberg over the weekend, Cape Town Disaster Risk Management said on Wednesday.

A combination of extreme temperatures, strong winds, and inhospitable terrain have hampered the disaster management efforts in the Cape Peninsula, where fires have been raging in several areas.

A fire, which started just after 2am on Monday in Muizenberg, above Boyes Drive, spread to Ou Kaapse Weg, Chapman’s Peak, Hout Bay and Tokai. Firefighters are battling the fire on three fronts: Chapman’s Peak on the Hout Bay side, Tokai Forest and Noordhoek.

Eish RT @eNCAnews: BREAKING NEWS: Firefighters are unable to enter terrain in Muizenberg, they are going in on foot. #MuizenbergFire (1/2)

“Since the early hours of this [Wednesday] morning eight houses were damaged, three were badly damaged. One in Noordhoek, two in Tokai, one in the Steenberg Golf Estate and four in Klein Constantia,” said Cape Town Disaster Risk Management spokesperson Charlotte Powell. “At this stage approximately 300 people were evacuated and no injuries reported.”

Children at Muizenberg Junior School have been advised to stay at home, as the fire continues to creep toward the built up area above the school, EWN reported. Less than 20 children of the 500-strong school were present on Tuesday.

An extra 250 firefighters were called in to tackle blazes across the Western Cape on Monday, the provincial environmental affairs department said. About 300 firefighters are currently working around the clock.

The City of Cape Town on Monday said that firefighters had worked through the night to ensure the fire remained contained.

Wildlife are collateral damage, as the fires devastate the environment.

Twitter was awash with posts relating to the fires. @FynbosFire tweeted tips informing people what to do.

Children at Muizenberg Junior School have been advised to stay at home, as the fire continues to creep toward the built up area above the school, EWN reported. Less than 20 children of the 500-strong school were present on Tuesday.

Three men injured after whale lands on their boat