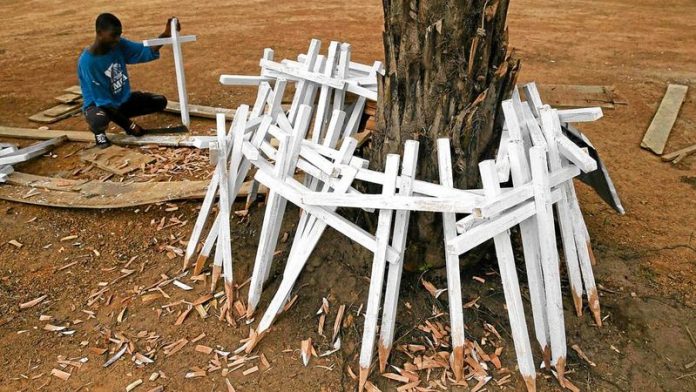 Regional and world leaders have called on the international community to scale up their efforts to rebuild the nations devastated by Ebola amid fears that the death toll from the outbreak could be even higher than previously thought.

Although the epidemic, which has ravaged Liberia, Guinea and Sierra Leone, appears to be drawing to a close, the secretary general of the Red Cross has warned that the true number of victims could be substantially greater than official estimates.

“Even though statistics show that over 9 000 people died of Ebola, our volunteers on the ground were called on to bury 14 000, which means that many more died from Ebola,” Mohammed El-hadj Assy told a conference on the Ebola crisis in Brussels on Tuesday.

Despite a massive aid effort, the United Nations operation against the disease is still facing a $900-million shortfall. Less than half of the $5.1-billion pledged to counter the epidemic has so far been disbursed.

African Marshall Plan
The Liberian president, Ellen Johnson Sirleaf, said that recovery from the epidemic would require “significant resources, perhaps even a Marshall Plan”, adding that “additional resources” would be needed from the European Commission, the International Monetary Fund, the World Bank and the African Development Bank.

The original suggestion for an African Marshall Plan had come from the World Bank but “we would like to conceptualise it a bit more”, Johnson Sirleaf said. Primary healthcare systems might be one initial beneficiary.

New Ebola cases in Liberia, Guinea and Sierra Leone are now falling – from around 600 a week to fewer than 100, according to the United Kingdom’s international development secretary, Justine Greening. “I think the end is in sight,” she said on the fringes of the meeting. “But the big challenge is getting down to zero. We have to make sure that complacency doesn’t set in.”

The former British foreign secretary and chief executive of the International Rescue Committee, David Miliband, said: “There’s a real danger of a lost decade if the lessons locally and internationally are not learnt. We already have a lost year of schooling, of economic growth and of lost confidence so we must not be rose-tinted about the challenge over the next decade.”

Despite a clear trend of declining Ebola cases, an April 15 deadline for eradicating the disease set by regional leaders is considered optimistic by many in the development community.

“It is not easy to aim at the zero target,” Alpha Condé, the Guinean president, told the conference. “We will all have to scale up our efforts – and we will need all the help we can get.”

Economic losses from the disease have also been enormous. The World Bank estimates lost gross domestic product growth in the previously dynamic economies of Liberia, Guinea and Sierra Leone at $1.6-billion this year because of the disease. The wider regional costs could be as high as $6-billion.

In Liberia, where only one new Ebola case was reported last week, thousands of children have begun returning to school. But more than half of those schools have no water supply. And although 57% have a toilet, it is shared by 100 children on average.

Thousands of children left orphaned
Meanwhile, the devastating impact of the Ebola crisis was laid bare this week with a report showing that more than 12 000 children have been orphaned by the disease in Sierra Leone. They have been identified in the first national survey of orphans, which was conducted by the British charity Street Child. It says the future for these children is dire; many are living in fear without the support and security of parents. But the charity says there is hope “if the international aid community works together”.

The charity found that some children, rejected by their friends because of the stigma of Ebola, have tried to take their own lives. Some girls are being forced into sex work to earn money for food their parents would previously have provided.

Street Child’s case studies expose the vulnerability of those left behind without an adult for support.

One 17-year-old girl from Kailahun lost both parents and her 14-year-old brother, leaving her in charge of her twin brother and 11-year-old sister. During the 21-day quarantine period, one of the soldiers guarding the quarantined zone broke into her home and attempted to rape her.

“It is very striking that such a vulnerable child-headed family, living not in a rural location but in the second town of Sierra Leone, has received no external assistance – it shows the limit of the Ebola response to date,” said Street Child, which recently came to her aid.

Another girl, identified as Mariatu, lost her father to Ebola. She has now joined her mother and eight younger siblings working in a quarry to feed themselves. She is also pregnant, and the father of her child is no longer around.

The average age of orphans is nine, the charity found, with 17% being looked after by a caregiver who is supporting five or more orphans. – © Guardian News & Media 2015