UN calls on countries to ‘root out’ injustices that fuel extremism 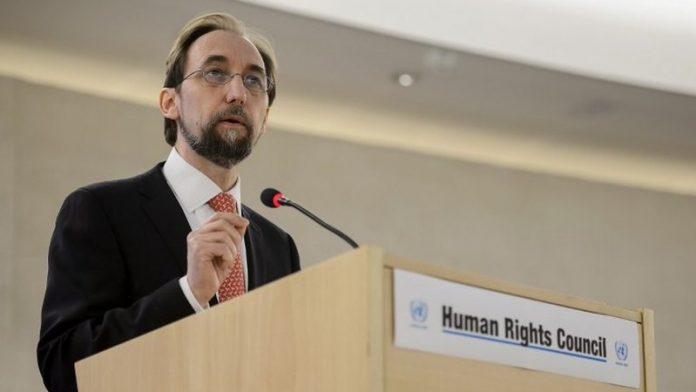 In their battle against “terrorists”, countries around the world must root out the injustices that fuel extremism and are used as recruiting tools, the UN human rights chief said on Thursday.

“The struggle to combat extremist violence must tackle the visions of injustice that fuel it,” Zeid Ra’ad Al Hussein told the UN Human Rights Council in Geneva.

Countries needed to examine the “experiences of humiliation, inequality and discrimination that may drive, though they do not excuse, the urge to destroy,” he said.

In his annual report to the UN’s highest rights body, Zeid decried a “shocking range of violations” carried out by jihadists from Islamic State (Isis) in Syria, Iraq and Libya.

“Mass beheadings, burning people alive in cages, seemingly genocidal attacks on ethnic and religious groups … recruitment of children, the destruction of elements of the cultural heritage of humanity, and not least, particularly vicious and comprehensive attacks on the rights of women and girls.”

In a longer written version of his speech, he also lamented the “bloodbaths” carried out by Boko Haram in Nigeria, including using “young girls as remote-controlled bombs, in explosions that tear apart their bodies as well as those of many others”.

But while stressing the need to fight such extremism and bring the perpetrators to justice, Zeid warned that countries risked making the situation worse if their counter-terrorism operations were perceived as overzealous and unjust.

“The fight against terror is a struggle to uphold the values of democracy and human rights, not undermine them,” he told the council.

Operations ‘hand’ terrorists a propaganda tool
“Counter-terrorist operations that are non-specific, disproportionate, brutal and inadequately supervised violate the very norms that we seek to defend,” he said.

Such operations, he added, “risk handing the terrorists a propaganda tool, thus making our societies neither free nor safe”.

Zeid pointed to the case of the US, where the orange jumpsuits used at the Guantanamo Bay prison camp have been used as “a recruitment tool for (Isis) and other groups.”

Perhaps the biggest driving force behind the extremist “mindset” seen in the Middle East and elsewhere, is the nearly four year Syrian conflict that has cost the lives of more than 210 000 people.

“The vengeful actions of the Syrian government, whose campaign of violent repression against what were originally peaceful protestors began four long years ago, have now morphed into wave upon wave of pitiless assaults by all sides,” Zeid said.

The actions of brutal regimes who trample on the rights of their people and ignore their basic needs fuel violent extremism, he warned, pointing out that the many people joining groups like Isis have not been “suddenly and inexplicably hypnotised”.

“Extremism, however repugnant, is nurtured by ideology and by alienation fed by years of tyranny, corruption, repression, discrimination, deprivation and neglect of the legitimate rights of communities,” Zeid said.

Many of the recruits to Isis, coming from more than 50 countries, are “filled with ill-defined rage at what they perceive as unfair treatment” and “may genuinely feel they are signing up to protect the abused,” he warned. – AFP

Nina Larson
Covering the United Nations agencies and other international organisations based in Geneva, as well as Swiss news for international readers. Producing news articles and features, translating and editing articles written by other correspondents in English and French, and shooting and editing video for AFPTV.
Facebook
Twitter
WhatsApp
Linkedin