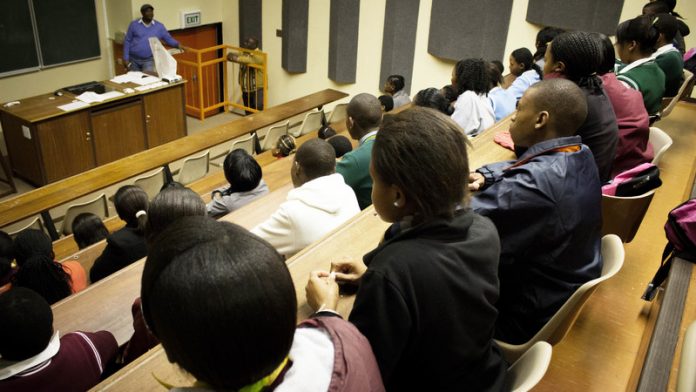 To “fudge and skew” how transformed they were, local universities used the “trick” of including international African academics in their statistics to show the extent of redress, equity and access, according to Professor Sakhela Buhlungu, dean of the faculty of humanities at the University of Cape Town (UCT). But this practice by universities’ managements was “hypocritical”.

Buhlungu was speaking last week at a public debate on transformation in higher education at the Vaal University of Technology (VUT). On the panel with him were UCT’s Professor David Cooper and VUT deputy vice-chancellor for governance and operations, Professor Gordon Zide. Chief Mabizela, the chief director of policy in the higher education and training department, was expected to join the panel but did not arrive.

“Something common [across ­universities] is a cop-out where international scholars, who just happen to be black, are counted as equity candidates. It’s the most ­dishonest, most hypocritical and cynical thing you find,” Buhlungu said.

A published and experienced authority on trade unions, Buhlungu told an audience of about 60 that his argument on this matter had “unsettled” a number of his fellow academics.

No monitoring
“There’s something not right here, something that nobody is monitoring and taking to task,” he said.

“In other words, we take a person from Ghana, which, as you know, became independent in 1957, and we say again: ‘That colleague, competent in his or her own right, is a redress candidate.’ It cannot be like that.

“Whether they have permanent residency in South Africa [or not], they cannot count as redress candidates. Full stop. We can disagree on this one.”

The “skewed revolution” at universities that “continues till this day” was that the number of black academics hadn’t followed the quadrupled percentage of black students since the apartheid era, Buhlungu said.

His faculty at UCT, which he joined in January last year, has five black full professors who lecture, out of a staff of 250.

“That’s not atypical. You go to Wits University, University of Pretoria and University of Johannesburg [at all of which Buhlungu has worked], and the same pattern emerges.”

Complaints
Drawing laughter and applause, Buhlungu said the university transformation agenda was in trouble if people entrusted with helping achieve it were also complaining.

“It’s very depressing when you hear even the minister [of higher education and training, Blade Nzimande] complaining about North-West University being an ‘apartheid university’. I thought we put the minister there to fix things, not to complain as we do,” he said.

Responding to Buhlungu, VUT lecturer Nolutho Mkhumbeni said there was also a need to pay attention to the students admitted by faculties for postgraduate studies.

With the exception of Buhlungu, audience responses focused almost entirely on perceptions of an outright crisis in university transformation. (See “Take steps to solve the crisis”.)

“One of the things I’d like to see happening is to have an institution led by a person with a ­disability as a vice-chancellor or deputy vice-chancellor,” Zide said.

Take steps to solve the crisis

South Africa’s limited success in producing black academics is behind the academic crisis, said Professor Sakhela Buhlungu, the dean of humanities at the University of Cape Town.

Only 28 women are full professors.

“There is a crisis, but also there are opportunities when we open our minds.”

The following steps would help to turn the situation around, he said: