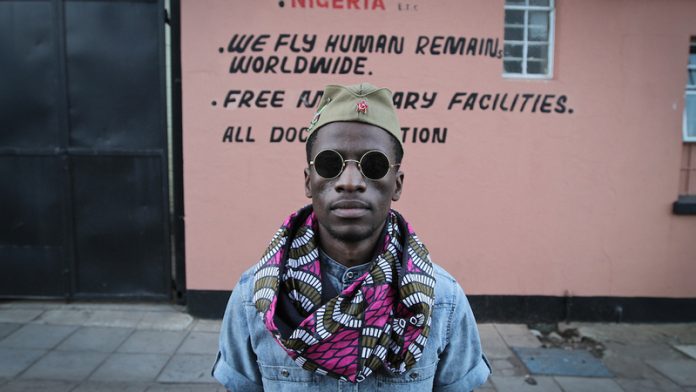 “I’m my biggest inspiration. I fuckin’ came to America with $100 in my pocket, jumped on stage, and my ass is still here.” And South African rapper-producer Jonny Joburg (Luthando Sithole) is rightfully so. In October last year, the Pietermaritzburg-born artist took what was supposed to be a five-day trip to attend the Revolt Music Conference in Miami, and five months later, he’s still in the United States and his new song, Michael Jackson, has recently premiered on Sean Combs aka Puff Daddy’s cable music channel Revolt TV.

While attending the annual event, the producer of South African rap hit Mazishe jumped on stage and performed in front of a panel that featured the likes of music executive LA Reid of Epic Records and producer DJ Khaled. “I just came to the conference to learn some stuff,” he shares over Skype from Los Angeles, which he refers to as his new home.

“Next thing you know: I have people telling me how good I am and that I should stay in the US, and pursue the rap industry here. Everything I thought about rap just got shattered when I got out to America.”  And since taking that a trip to the US, Jonny Joburg – who has produced for musicians like singer Cama Gwini – says he’s been recording music and has been taken under the wing by the likes of former Motown Record president Andre Harrell.

The Mail & Guardian Friday caught up with one half of local rapping duo Spaza Shop Boyz:

M&G Friday: Hey, so what are you doing in the States?
Jonny Joburg: I came to the US just to attend a conference. It was supposed to just be a five-day trip. But when I jumped on stage at the conference, I got shown a lot of love.

M&G: So did you have a return ticket when you left?
JJ: Yes I did. I missed two or three return flights. Every time I’m supposed to return, something cool happens.

M&G: In the intro the Michael Jackson video we see you jumping on stage. What was the reaction to that?
JJ: After that, I was like a VIP man. I just got showed a lot of love from everybody; from Puff’s team, to people who were attending the conference. Everybody wanted to work [with me] after that. I was just confused because there was a lot of hustle and bustle after that. People were telling me, I’ve got to change the way I dress. All sorts of things! I had to follow people around, to meet people.

M&G: Can you give us an example of who you followed around?
JJ: Andre Harrell, Diddy’s mentor who I met in Miami. He introduced me to Tuma Basa who is the head of music at Revolt TV and has been guiding me. And then there’s Julian Hill, who owns J Hill Management in New York – and who started as intern for Uptown Records under Andre Harrell and Puff. He has been a great mentor and motivator. I’ve also recently been linked with a lady named Emilienne Gray who is the former senior vice-president of music at MTV USA. She’s really great and has been helping me with my strategy.

M&G: It’s great that they’d show some much interest in a South African musician.
JJ: I think it’s cause I showed initiative. America’s a different kind of country; in America, if you put yourself out there, you get love. If you have balls, that’s what they like. I think they like that even more than talent.

M&G: Do you think it’s like that on the SA music scene?
JJ: [Laughs]

M&G:  What is your connection to the states? You rap about your dad flipping burgers in the US in your song, The Pledge.
JJ: My family moved to the States [when I was young]. My dad was studying at the time. I went to crèche there and I did grade one in England. About The Pledge: that’s an on old song that I released last year. We were pretty poor [while growing up]. So I decided to rap about it. How poor we were in America and England had a lot to do with my family dynamics and how close we are.

M&G: So, despite your family owning recording company Native Rhythms, I guess it doesn’t mean that you always came wealth.
JJ: Far from it. I was born very poor. People just don’t know that.

M&G: You mentioned that people advised you to change how you dress, and you have a very recognisable style. Do you want to comment on that?
JJ: My whole style was quite hip-hop and underground. So they advised I “clean it up”. Which is cool, cause I’ve been doing some shopping.

M&G: And what about your altercation with Jo’burg-based music group Boyznbucks after you called them out on TV last year?

Remember that time I dropped a freestyle dissing @boyznbucks on @Craze_TV Shiz Niz? Well now you can watch it again! http://t.co/iWE5rpjq4W

JJ: Who are they? I’ve never heard of them. I can’t answer things I don’t know.

M&G: I thought you patched it up with them?
JJ: Who’s them? Do they make music?

[Laughs]
JJ: I’m Jonny Joburg. That’s the only rapper getting mentioned in this interview.

M&G: Moving on, what is your routine out there?
JJ: It’s not really a routine, but it’s either I’m making music. Or I’m on the phone, trying to make a deal. That’s what I do with my time. I was in the studio just yesterday, which was really rad. I also record at this place called Treehouse Records.

M&G: What about your production work, are you still producing?
JJ: I’m very picky about who I give beats to. You have to be better than me. [Laughs] Production is cool, but it’s on hold right now because I’m working with a lot of young US producers and one kid from Africa: Dutch from Zimbabwe; he produced Michael Jackson and needs to be out here.