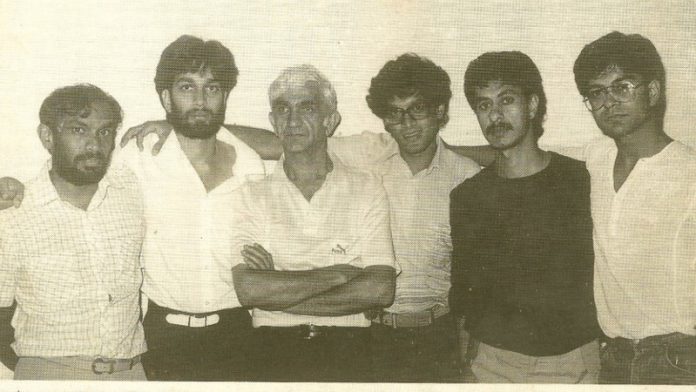 March 7 marked 29 years since the day of our release from detention under the 1985 state of emergency. Once like the wall of a squash court against which I continually played my life, that era now recedes as South Africa travels further away.

In 29 years I have travelled the world, studied, married an English girl, deserted Lenasia for the suburbs, owned three houses, become a filmmaker, had two sons, buried my father and mother, voted in four general elections, and withheld my vote in protest in the last.

None of this existed for me as I sat in the courtyard sun at Diepkloof prison 29 years ago. On the ground next to me, back to the high brick wall, sat Ambi, oblivious that he would be mayor of Johannesburg one day – in those days Amos Masondo was simply Ambi. We talked easily, free of the protocols of position.

In rushed Ismail Momoniat, the Citizen in hand. “Hey guys!” he shouted, “The emergency is going to be lifted!”

I was surprised by his excitement. Among us, Momo (as Momoniat, now a deputy director general in the treasury, is still known) was most given to cynicism. Here he was giving in to the promise of the Citizen.

We had learned not to get our hopes up by rumours of the end of the state of emergency and our release. We had learned this by the third month – a number of bitter disappointments that crushed the spirit. But, that day, we heard the order: “Pack your things!” And thus began one of the longest days of my life.

Were we really to be released?

We had first been told to pack our things a week after our detention, when we were moved to Diepkloof prison from the dusty solitary cells of Protea police station in Soweto. I perversely protested to the police warder that I did not want to move – I was used to my cell.

Diepkloof, known as Sun City, boasted bunk beds and hot water. The water was so hot we boiled smuggled eggs in it for surprise birthday breakfasts-in-bed for fellow detainees, served with a copy of a smuggled newspaper and a sprig of any wild flower found in the courtyard.

But before we were again told to pack our things and moved to the communal cells of F-section, we were held for a week in single cells upstairs. In long corridors of single cells we felt like manic animals, recently captured, awaiting processing to zoos.

But we got to know who from Johannesburg, and particularly Lenasia, Soweto, central Johannesburg and Alexandra, had been captured in the first hours of the declaration of the state of emergency. Scores were taken off the buses from Cradock, where we had gone to bury our murdered United Democratic Front comrades: Matthew Goniwe, Fort Calata, Sparrow Mkonto and Sicelo Mhlauli.

In the segregated prison, we had no idea who among our white comrades had been held. I was amused to hear from those taken off the bus of Neil Coleman’s planned insistence to the cops that white and black should be held together. (Coleman is now a senior member of Cosatu’s secretariat.) The incongruous image I retain is of him running, waving and shouting with growing panic, after our fast-departing bus when we inadvertently left him behind at a shop stop en route.

The four F-section cells, which could accommodate some 35 people each, were all on one floor of the prison. Indian and coloured detainees were generally held in a separate cell from African detainees.

Ambi was once punished by being sent back to the single cells on a spare diet for a few days. Mosheen Moosa had to smuggle some food up to him.

Yet, in a 25m dash from the kitchen to our communal cell to hide the food intended for Ambi, he fell and splashed it all along the corridor.

Mosheen disappeared under a bunk bed just as the head of the prison turned the corner with a visiting dignitary. No one said a word, not even the prison head. We choked on laughter as he checked himself and pretended not to notice the mess on his gleaming passage floor. The rest of his procession followed suit.

Then the future MP in the National Council of Provinces emerged from under the bunk bed.

For the length of the day we were slowly processed, in self-imposed silence and reflection as the day wore on, down into the depths of the prison until we stood packed in the cages near the huge, hanger-like doors through which we had entered nearly eight months before. It was already dark.

“I think we’re going home, Ambi,” I said to Masondo as the next batch of surnames, those beginning with M, were called.

The huge doors were opened a crack and we were sent out straight into harsh floodlights, flashing blue lights and the podgy hands of the feared and hated security branch. It was hugely unexpected.

One we called Mouse Face was all glee. He grabbed Momo, just ahead of me, handcuffed his hands behind his back and led him off, wide-eyed. The same happened to Ambi.

I wondered why I didn’t have handcuffs slapped on me – like the others, I was held on either side by a security policeman and escorted to a car.

I had Sergeant Pieterson. My nemesis. We all had our nemeses among the security branch. “You’re going to Cape Town,” he said as we drove off. “Separated. Others to PE, Durban, Orange Free State … indefinite detention.”

But as we exited the freeway towards Lenasia, blue lights flashing, I knew I was going home. I vowed to fight for the release of Momo and any others redetained and swore at the apartheid state and its security police with all my mind.

As I was led into a cell at Lenasia Police Station, I was glad to see others of the Lenz contingent there already. One by one we were brought in and soon all of us were accounted for: Momo, Laloo Chiba, Mosheen, Yusuf Areff, Prema Naidoo and Ram Saloojee.

When, by Chiba’s calculations, the clock had ticked midnight, and we were still sitting in that cell, he matter-of-factly rolled over on the floor to sleep, saying: “That’s it. Redetention.”

Then the key turned in the door and we were led to our cars and driven home, 29 years ago.