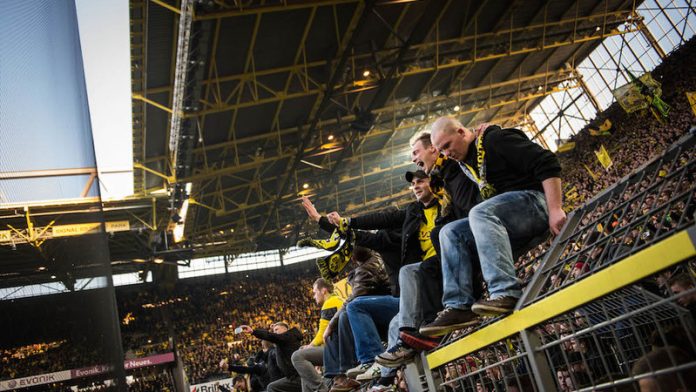 “Football,” they used to say in Germany, “is the most beautiful minor matter in the world.” That sentiment went out of fashion, along with those funny denim vests covered with fan badges and managers in salmon-coloured blazers, a few years ago. The game has become one of the most important major matters in the country, a cultural activity that seems bigger than music, art, theatre and all other sports combined, if audience figures are anything to go by.

That rise to all-conquering prominence has attracted the country’s brightest minds and developed into a highly professional, productive industry. But football’s heightened social relevance is also reflected in the sort of insufferably grim, po-faced seriousness that used to be confined to political struggles or actual tribal conflicts.

Owing to its lower profile internationally and Germans’ relatively small appetite for public debate, we have, mercifully, not yet reached the point where recently converted VfL Wolfsburg supporters in sub-Saharan Africa scour the internet for perceived slights to their club and vow to hound the offending pro-Whatever FC journalists out of their jobs. (Regular “comments section” frequenters will recognise the phenomenon: newcomers to the faith, especially those who live too far away to physically congregate with their gods and prophets, seem to feel the need to compensate for those defects by adopting a fundamentalist, 100% humour-free stance in defence of their side, while those born into the religion through parental lineage or proximity can often afford a more relaxed, ambivalent and honest relationship with the powers that be, as well as more tolerance towards nonbelievers.)

But the prevalent ultra-earnestness and “us and them” mentality is nevertheless beginning to suck the fun out of weekends a little, as recent events have shown. Before last week’s Ruhr derby on TV, BVB and Schalke supporters surrounded and hit out at the card-carrying commentator to the game, Marcel Reif (65). He laughed it off, but he was showered with beer, spat at and threatened by Dortmund fans foaming at the mouth in the run-up to the Black and Yellows’ DFB-Pokal win at Dresden on Wednesday night.

Sardonic description
His crime was his sardonic description of the Batman/Robin masquerade (when Dortmund players Pierre-Emerick Aubameyang and Marco Reus donned Batman and Robin masks to celebrate the striker’s goal against Schalke) as “Punch and Judy theatre”. “I’m too old [for such stunts], but we live in a free country, of course,” he said. The Dortmund coach, Jürgen Klopp, replied in the Dresden pre-match conference that everyone found the celebration funny. “Everyone apart from Marcel Reif – he doesn’t find anything funny anymore in his life.” Reif stopped short of blaming Klopp for the subsequent trouble but called his comments “irresponsible”. Klopp apologised on Wednesday night by saying “there was no need for that”.

Reif, to tell the whole story, had called Klopp a “Rumpelstiltskin who would have been better off in the second division” in a 2008 newspaper column he later retracted. But it is unlikely that BVB supporters were still enraged by that comment seven years later. The hate towards the Sky Germany man is sadly indicative of that new era of dourness we seem to have entered.

Reif is disliked because of his critical, sometimes sarcastic, commentary about the game and the teams, and for a sense of irony and distance that those embroiled in partisan passions find simply unacceptable. His eloquence is treated with suspicion – some find it patronising, others boastful – his failure to commit to a team as treason. Bayern-lovers are convinced he hates Bayern, Bayern-haters are sure he loves Bayern. He actually supports Kaiserslautern. But most of all, they viscerally dislike the subtext of his rhetoric: football is never more than football for Reif.

That subsumption is regarded as an affront, a declaration of war even, by those who have elevated the game to being the sole provider of identity and purpose in their lives. Nuances and laughs wither in the shadow of giant flags, positions become more and more entrenched. The increasingly bitter “class war” between fans of traditional clubs and those from new-money teams such as RB Leipzig and Wolfsburg is also infused with such quasi-religious fervour. Representatives of the orthodoxy believe it is their duty to defend the purity of their belief system against the destructive forces of liberal capitalism.

Supporters aren’t the only ones to blame for that joylessness, to be sure. During Bayern’s 3-1 away win to Hannover 96, thanks to two dodgy refereeing decisions and the return of Bayern-Dusel, the club’s infamous luck in winning games when playing badly, only the travelling supporters from Bavaria made themselves heard. It has been eerily quiet in Hannover home games since the beginning of the season, when the 96 ultras started boycotting their own club and switched their allegiance to the under-23 team. The most influential supporters’ group was de facto dissolved as well.

Banned banner
The origins of the falling-out go back a few years, when 96’s president Martin Kind banned the display of a banner featuring the face of mass murderer Fritz Haarmann, clamped down on the burning of flares and on fans’ dissent against his stewardship in the stadium. Kind called sections of the fans “arseholes” and raised ticket prices as “collective punishment” for certain, unruly sections of the ground.

Matters came to a head last season when the club insisted all supporters travel to the away derby game at Braunschweig on organised buses. Eleven fans successfully sued against that requirement; the club employed legal technicalities to prevent others from following suit.

And from radicalism and hate it’s but a small step towards actual violence. Twelve policeman were injured during clashes before and after Stuttgart’s 0-0 draw with Hertha recently – one officer fired his gun into the air when his car was ambushed by 80 VfB trouble-seekers. Frustration about the Swabians’ relegation struggle – they are bottom of the table – seems the main motive.

Inside the ground, Huub Stevens’ team was heckled by irate fans at the final whistle in scenes that have become familiar in the league. Direct dialogue between the crowd and players provides a welcome degree of accountability but the unwillingness of some fans to accept basic sporting realities – such as their team simply not being very good, for example – is indeed worrying. They believe it is the players’ job to win, so the failure to do so is seen as a dereliction of duty.

This is the blood-and-honour discourse of sociopaths and it should be recognised as such, or perhaps better, be made fun of. Football is supposed to be for pleasure, a diversion from depressing reality – not a re-enactment of all its ills. – © Guardian News and Media 2015