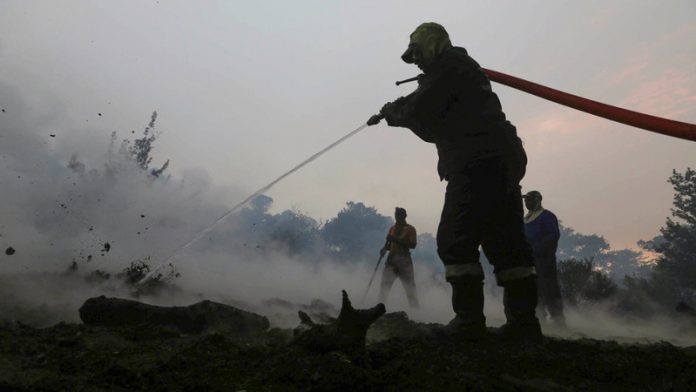 Female firefighters working for the City of Cape Town say they are punished if they fall pregnant – they lose up to a quarter of their salaries because standby allowances are deducted during their pregnancies.

But their male counterparts who are injured on the job do not lose their standby allowances. The City responded, saying woman firefighters who were injured on duty also received this allowance.

Some of the women who were involved in fighting the recent fires that broke out in the Cape Peninsula mountains – and which affected large parts of Cape Town, including Hout Bay and Tokai – were pregnant. About 500 people were evacuated during the fire, which was extinguished this week. The women have sought legal advice on the issue.

The women said they were told the allowance was deducted because pregnant women are put on day shift because they cannot fight fires while they are pregnant.

This “penalty” was not in their contracts or in any formal policy document, according to the women.

The City said the practice is contained in a collective bargaining agreement between it and the unions.

‘Discrimination’
Sanja Bornman, from the Women’s Legal Centre, said it appeared the City of Cape Town’s treatment of pregnant firefighters “amounts to discrimination on the prohibited grounds of sex and pregnancy”.

“This is in contravention of sections 5 and 6 of the Employment Equity Act, and a violation of the constitutional rights of these women.”

The women firefighters said they understood that being taken off operational duty during their pregnancy made sense, for the safety of their unborn babies, but they have asked to be given other work around the fire station that would allow them to work longer shifts so that they did not lose the standby allowance.

In extreme cases, women said their allowances were deducted years after their pregnancies. One woman fell pregnant in 2004 and again in 2010. The money was deducted in 2012.

“When I queried this, they told me that the money was viewed as a loan to me and that I had to pay it back with interest,” she said.

Hidden pregnancies
Women told the M&G that their colleagues hid their pregnancies until about six or seven months, to avoid losing their money.

Others are heavily in debt.

Anne* said it is not just the standby allowance that is lost. The City also deducted her meal allowance (R160), her driving allowance (R130) and an allowance given to personnel with particular medical qualifications (R170).

“There’s nothing in black and white about this policy. This thing started in 2008. It never used to be like that. Before 2008, pregnant women would be put in the watch room, waiting for calls to come in, and they would still work the same hours.”

The City maintains the policy is designed to protect pregnant women. Richard Bosman, executive director for safety and security at the City, said it viewed pregnancy as a “temporary incapacity”.

“Pregnancy brings with it many risks to the mother and the fetus and, as a result, female staff are placed on day shift in a safe environment. As a result thereof, and as a result of the fire services collective agreement, if a staff member cannot perform their operational duties as is the case with a pregnant firefighter, then their standby allowance is withdrawn. The only exception to this rule is for an injury on duty case.”

*Not their real names.

The scales are still tilted in favour of men, but younger people with tertiary education have less discriminatory attitudes
Read more
Africa

How to get women’s voices heard in African politics

Getting women into politics is only half of the challenge. The second half is to make sure that women are not only seen, but also heard
Read more
Advertising
Continue to the category
Coronavirus