Solar heats up as Eskom steps in 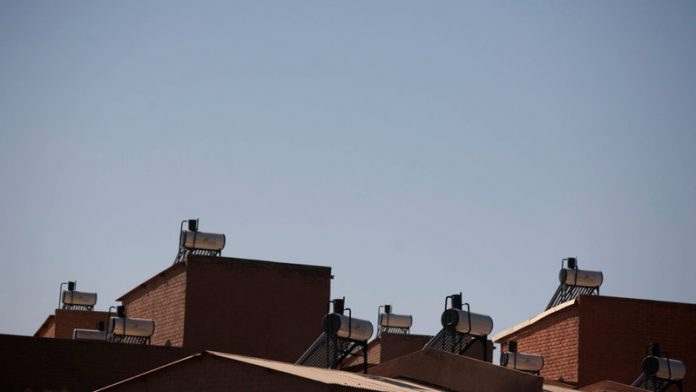 The burgeoning solar geyser sector came within a few days of collapsing. Thousand of jobs hung in the balance because the rebate programme driving it fell between government departments. But this week Eskom moved to save the sector and keep factories open.

“Two months like this and we’re done,” said geyser manufacturer Klint Munton earlier this week, six weeks after the rebate for solar geysers was supposed to have moved from Eskom to the department of energy.

In January Munton’s Cape Town factory rolled out 100 units, 20 more than his breakeven requirement. This month he had sold five.

“I mortgaged my house to start this factory,” he said.

Much of his business came from geyser installation companies subsidised by Eskom.

After the 2008 power crisis, the treasury gave the power utility funds to lower energy demand during peak hours – when people leave and return to their homes. It identified solar water heaters as one of the quickest ways to take energy off the grid. Builders and home owners were given up to R12 000 for putting geysers on their roofs and, by last year, an average of 2 000 a month were going up. Installers would give accounting firm Deloitte their rebate requests, which would then be paid out by Eskom.

Administration change
But on January 7 this year Eskom said it was no longer handling the rebates and the energy department would be taking over their administration from February.

Munton said: “We opened our emails to find a little love letter saying it was all over.”

The industry could survive because people still wanted hot water that was not dependent on the power grid, he said.

Then, on February 4, the department sent out a media release saying 5 000 more geysers could be built under the old rebate programme. A subsequent “clarification note” on February 6 said that, once the 5 000 had been installed, “a new revised rebate programme will be introduced in due course”.

This froze orders, said Valerie Morris of installation company Renaissance Solar. “People immediately stopped ordering geysers because they were waiting for the new rebate and were not sure who would be covered by the old one.”

By early March she had R100 000 of debt, thanks to unpaid rebates. “I’m now in a big hole,” she said early this week. The M&G spoke to a dozen manufacturers and installers this week who all said their businesses were on the verge of closing. Six weeks of unpaid rebates and the collapse in orders meant the small industry – which the energy department initially said would create 100?000 new jobs – would probably not make the end of the month. But on Wednesday evening this changed.

Jacques van Dyk, whose SolarMax had seen millions of rands of orders put on hold, phoned M&G to say Eskom had stepped in and continued to run the old programme. Rebates could now be submitted to Deloitte for processing. Eskom told him and other producers that it would oversee the programme until the 5 000 geysers were installed and the energy department was ready to take over.

“You cannot imagine how extremely relieved I am,” Van Dyk said on Wednesday night.

The six weeks of waiting nearly cost him his business, which sources 95% of its content locally. Although 10% of his orders had been cancelled, the rest had been put on hold and he was already negotiating to start production. “Those six weeks nearly broke me but now we can start working again,” said Van Dyk.