Beyond the bratwurst – and boerewors – curtain 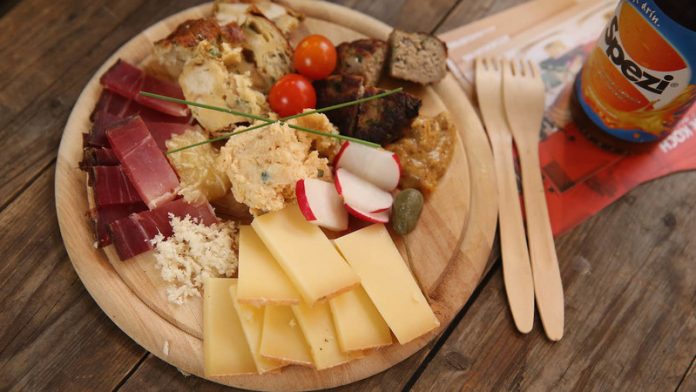 A History of Food in Germany, and found some similarities between Germany and South Africa.

Berlin is in the middle of a heat wave when I meet up with Ursula Heinzelmann, a born-and-bred Berliner and author of the tome Beyond Bratwurst: A History of Food in Germany (Reaktion Books, 2014). She breezes in, a trim woman with sparkly eyes, and shatters any stereotypes about German humour (or lack thereof) by completing my first question. “So …” I begin, taking a deep breath. With a warm laugh Heinzelmann continues: “ … how did you come up with this silly title? Everybody thinks this is a book about wurst! It is not.” I laugh too. Ice broken.

We’re in a wine bar in Mitte –Heinzelmann’s suggestion because this is her neighbourhood. Although raised in Spandau, “west of the west” as she calls it, Heinzelmann made this former eastern suburb her home in the 1990s and has since seen the scene come full circle. “This is so uncool … okay?” says Heinzelmann of gentrified Mitte, breaking into a wry smile. “Just in case you didn’t know!”

Our bottle of Julian Haart Mosel Riesling is poured – also Heinzelmann’s suggestion – and I make a deprecating comment about South African riesling. “Come on, Bruce Jack made a perfect riesling,” counters Heinzelmann, referring to Jack & Knox Frostline, launched in 2003 but no longer produced. Impressive. There’s certainly no doubt about Heinzelmann’s credentials, which include sommelier, chef (Michelin starred no less), award-winning journalist (she twice won the Sophie Coe prize in food history) and cheese expert.

“Food is a fantastic lens through which you can view things, understand things, approach people, because food in the end is everything, it involves everything, if you move beyond mere recipes, which my book is not about.”

Apparently this confuses a lot of editors and potential reviewers set on recipe extracts – in 384 pages there are only three recipes, all of them medieval. So if not under cookery or lifestyle, in which section of the newspaper would Ursula like to find Beyond Bratwurst reviewed? Cultural history.

And as we unpack food culture, we find ourselves comparing notes on our countries’ respective histories. It seems South Africa shares a few things in common with Germany (and Berlin). Not least having to forge a new identity – culinary and otherwise – after being global pariahs. “The image, the reputation of Germany, has changed during my lifetime, so fundamentally, [the fact]that we’re sitting here now, where we’re sitting, is absolutely amazing. When I grew up in West Berlin, nobody, nobody would have thought this could happen,” says Ursula.

“The change in how people feel about Germany, nowadays, has got a lot to do with how we feel ourselves about being German, about our past. When I grew up it was so awkward and it felt as if nobody wanted to look at what had been happening. It was all like … don’t even talk about the past, right? It’s behind us, let’s just move on, which is not a good way to deal with something because it’s part of your identity and who you are. Now there is a willingness to deal with that. And to read about it.” And for Ursula, to write about it. 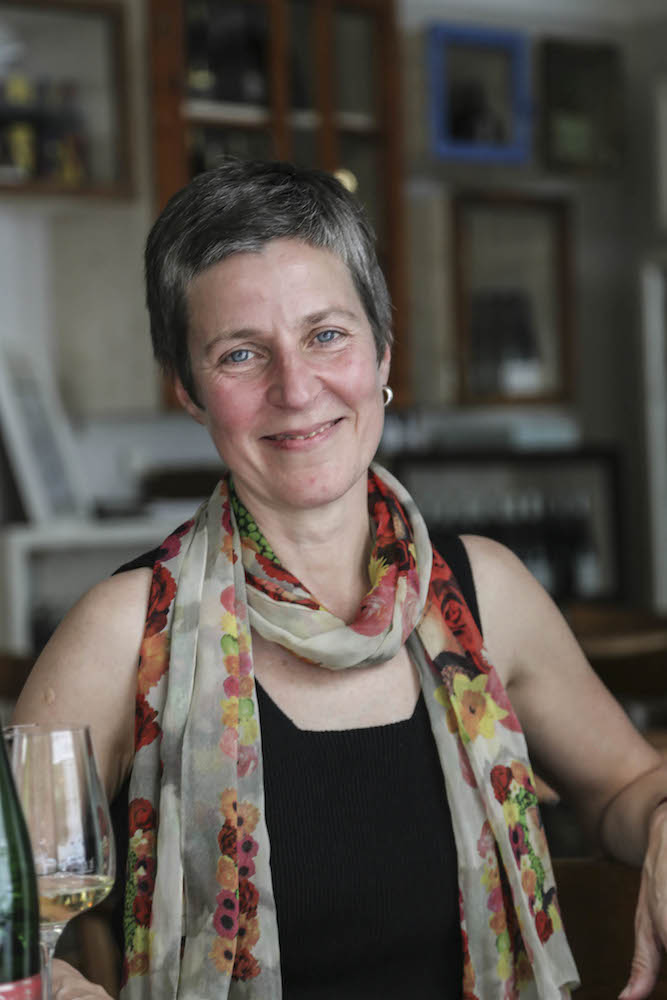 Chapter 10 is titled “Hope and hunger, volkornbrot and swedes, 1914 to 1949” and covers both world wars. “I put 1914 to 1949 in one chapter, one long chapter. And to write that chapter was really, really, really hard. Because even if you know all the historical facts, to look at it through food – and that is why I stress this is a cultural history – also means the absence of food and the procurement of food. To look long and hard at what really happened and what that meant for everybody here on the street – regular people – it was tough. But it was very necessary to look at it – and to really deal with it.”

But the burning question is, does Beyond Bratwurst define where German food culture is right now? Yes. And Heinzelmann is very willing to commit to an answer. “It’s mostly diversity. And we have not always been very good at dealing with it, but when you think of it Germany is in the middle of a continent. It’s between north and south, it’s got everything from seaside to mountains, it’s between big blocks of different cultures and so at any given time we’ve seen people going and coming and flowing through and there’s never really a static moment.”

It makes me think of my recent visit to the Black Forest and the savoury smell of döner kebab wafting through the backstreets of Triberg, not far from the world’s largest cuckoo clock. And of the excellent bibimbap I was served in Berlin and how one of the city’s high-profile chefs, Tim Raue, cooks Asian at his eponymous restaurant. Multikulti (multicultural) has been a buzzword in Germany for a while now but, like our rainbow nation, it’s not without problems – on or off the menu.

This diversity has coincided with the strengthening of the regional food movement, especially in Berlin, explains Heinzelmann. “You know the same people would be totally crazy about something really traditional, like rouladen or goulash, and then next moment eat sushi. So it’s this diversity and openness, which nowadays I think of as German.

“For a long time I thought ‘oh, I’d really like to come from a nice country?’” says Heinzelmann, intoning it as a question, as if I might understand – I do. “With a simple, easy history and background … like, oh! ja! Paris and French food! And haute cuisine! And the nice cheeses!”

Oh boy, how I can relate.

“But nowadays it is a big advantage,” she continues, “if you don’t have to cling to something set in stone, like a haute cuisine, which you even have to declare a national heritage and preserve.”

Heinzelmann’s correct: without the burden of an established national cuisine there’s the possibility of creating something new. “Germany has no national cuisine as such. There is not even a national dish. It’s always in flux and I think that’s a good thing. And I guess in South Africa you see a bit the same thing and the trick is to be inclusive.” 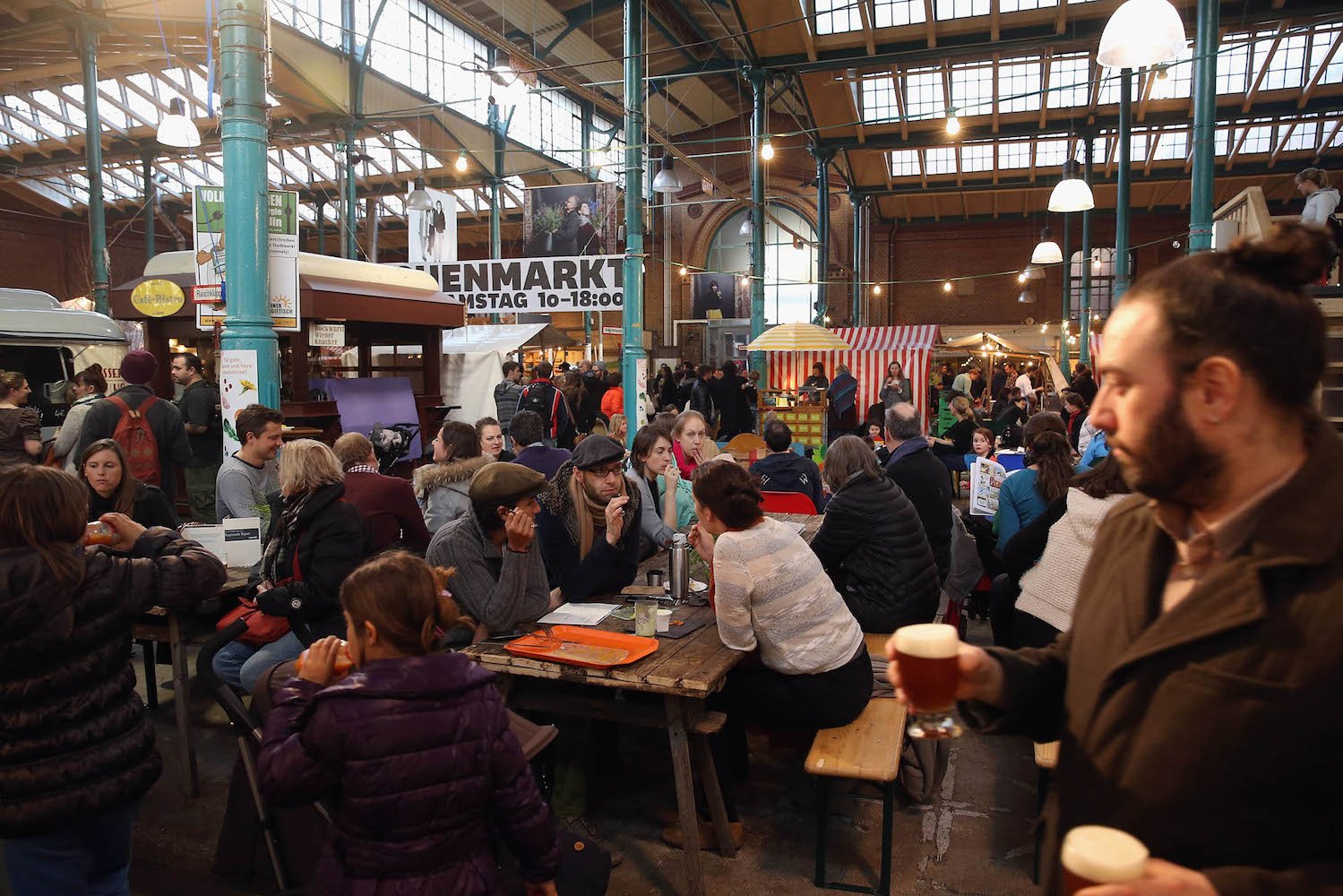 Inclusivity is what I see at the Markthalle Neun, a covered market that on Friday, Saturday and Tuesday returns to its original purpose of selling produce and provisions but on Streetfood Thursdays it is filled with all manner of stalls. The Heisser Hobel caravan selling spätzle with Allgäu cheese (South Germany’s answer to macaroni cheese), pastrami by Mogg & Melzer (a deli housed in a former Jewish girls’ school) and – Heinzelmann’s personal favourite – Glut & Späne’s smoked fish. “Did you try the Heidenpeters?” asks Heinzelmann, referring to the beer brewed on site.

I tell Heinzelmann it reminds me of the Neighbourgoods Market at Cape Town’s Old Biscuit Mill – even the location, Kreuzberg, which is an old Turkish quarter in the former West – bears a similarity to Woodstock. “For me Markthalle Neun is one of the most exciting locations right now and that’s why I more or less end my book with it. What they provide is a space – in every sense of the word – where ideas and people can flourish … vendors as much as consumers.”

Beyond “the Neun” and the Biscuit Mill, we’ve mirrored each other on our path to a newfound self-acceptance. On February 11, South Africans celebrated 25 years since Nelson Mandela was released from prison and on November 9 last year Germans celebrated 25 years since the Berlin Wall fell. Both South Africa and Germany rediscovered a sense of national pride through hosting a football World Cup.

“Funny, for us too, I think the World Cup in 2006 was really the point when things changed totally. For me, growing up, waving a German flag gave me the creeps. I could not. It was so strongly connected with all that was wrong about Germany. And suddenly, during that summer, we noticed that – yeah – it was actually okay to wave the German flag, it didn’t make you a Nazi,” says Ursula.

I nod, remembering the exhilaration of seeing the new South African flag fluttering on car bonnets and stretched over side mirrors. A 2014 World Cup victory further cemented Germany’s national pride as their team added a fourth gold star to their shirts, but Heinzelmann tells me we’re still one up on the Germans. Ah, of course, we had Madiba – and the momentous rugby World Cup win in 1995. But it’s not what I think. With that laugh again, Heinzelmann turns to me and says, “You’ve got Sugarman and we don’t!”

Nikki Werner
Nikki Werner works from Brisbane, Australia. Work for Navitas in Brisbane & finally discovering what this Twitter thing is all about
Facebook
Twitter
WhatsApp
Linkedin

Despite the public interest in the ruling, the commission’s deadline has become irrelevant as it abandoned hope of forcing the former president to testify
National

Judge Navi Pillay talks to Athandiwe Saba about being the daughter of a bus driver, a little girl who swore at school, and the pressure of being a leading woman in the world while being a mother at home
Politics

Magashule is expected to argue that the step-aside rule 25.7 is unconstitutional and unlawful
Advertising