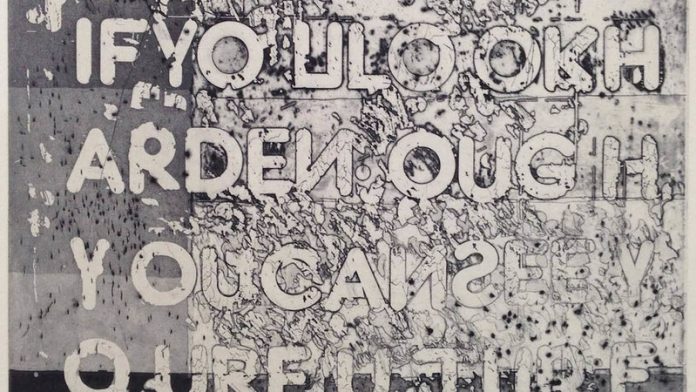 ‘Camouflage” – a delicious word and an inspiring concept, especially for an artist – is both the visual theme and metaphoric construct of Stephen Hobbs’s latest tight and thoughtful show.

Yet, for all his rigid conceptual grounding (isn’t his art always mostly about art?), there is surprisingly beautiful stuff to look at, as well as some entertaining, even humorously theatrical, accoutrements.

The range is wide: high-crafted prints in various media, makarapa-styled genuine World War I helmets, a coffee-table vitrine of a mini real garden/topographic layout, papier-mâché mannequin heads (“puppets to confuse the enemy”), mirrors, but not smoke (Pop-up Forest II). And then a kind of ersatz studio/workshop assemblage of work-in-progress, samples and so forth.

Hobbs has set up a very site-specific installation. It has the pleasing sensitivity and precise execution of a devoted hobbyist.

The war room
A cute report penned by Justin Fox, The Hobbsian Line, which accompanies the exhibition, is an ode to playing war games and building balsa-wood model planes.

“Site specific” here means history, fiction, research, inventive thinking and, yes, construction. Overall the installation in the long gallery can even be read as a play-play “war room” without disturbing the serious artistic investigation.

The David Krut gallery – a lovely, unassuming old structure under the tall Newlands trees at Montebello – is, as Hobbs points out, in itself “camouflaged” – both in the literal sense and from the grand, high-profile, high-street, high-art galleries doing business in Cape Town.

Not entirely an “alternative space”, it connects actively with and reflects the process of art-making through its print workshop, publishing and exhibition programme. 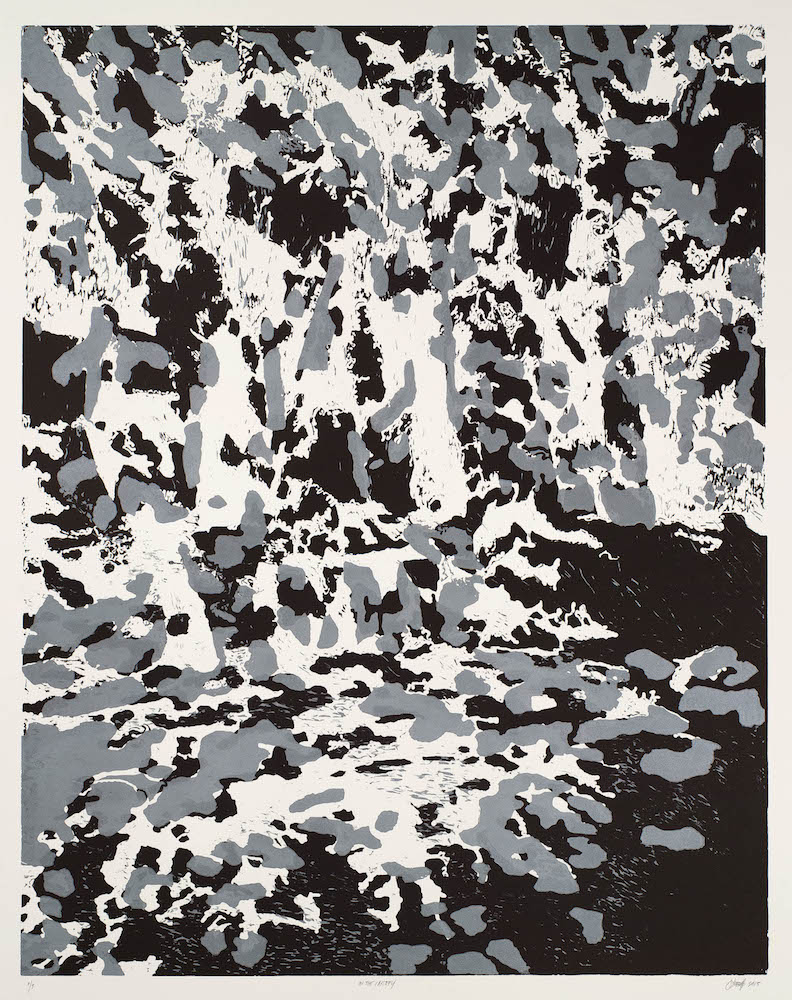 The nature of war and death
The Hobbs studio trappings stuck higgledy-piggledy on the walls ­suggest more than a peep at his inventive practice. It invades the room as “art-making space” without surrendering its showcase job.

The place and aura of Cape history that lingers have led Hobbs to the military link with the camouflage theme – one that he has explored for some time in his urban Johannesburg environment. His preparation led to investigation of the numerous old battlements surrounding Cape Town. And then the ghosts of their history.

Set off by fusing the dapple of daily shadow play from the trees outside the gallery, captured as photographs and manipulated into attractive woodcut prints (Gap in the Canopy and In the Canopy), he creates a kind of organic camouflage pattern, which is then picked up in a number of other pieces.

Of course, one is ever aware of the deep irony of this “beauty” used in the nature of war and death.

In etchings, this light-hearted leafy scribble becomes camouflage of a different kind as it obscures the actual outlines of an antique Cape Peninsula gun battery.

Blurring the “lines of sight” in another set of etchings, printing the same plate in multiple ways over and over in Main and Kruger, camouflage becomes an abstract concept of crypsis.

If this is the cerebral edge of Hobbs’s art, an attractive visuality proposes other art historical references. After all, weren’t the Cubists involved in World War I inventions of hiding guns, soldiers and armaments?

Do we make and engage with art to conceal, to expose, to confuse? If mimesis is a permanent construct of culture, if camouflage is fashion, where are truth and reality hiding or to be found? What is the role of the artist?

At this point the irony of the military association, however sentimental, historical, play-play or otherwise, comes vividly into play in Hobbs’s installation.

In the famous camouflage scene in Shakespeare’s Macbeth, when the renegade king’s opponents attack, masked as trees, the ambivalence of truth and falsehood plays out: I … begin/ To doubt the equivocation of the fiend/ That lies like truth:/ “Fear not, till Birnam wood/ Do come to Dunsinane”; and now a wood/ Comes toward Dunsinane.

Perhaps the idea of camouflage is that we never show the world or one another the authentic anyway. Negotiating camouflage is finding your way through the dabbled dazzle of the forest and not quite knowing where it is going.

Permanent Culture is on at David Krut, Newlands, Cape Town, until April 25