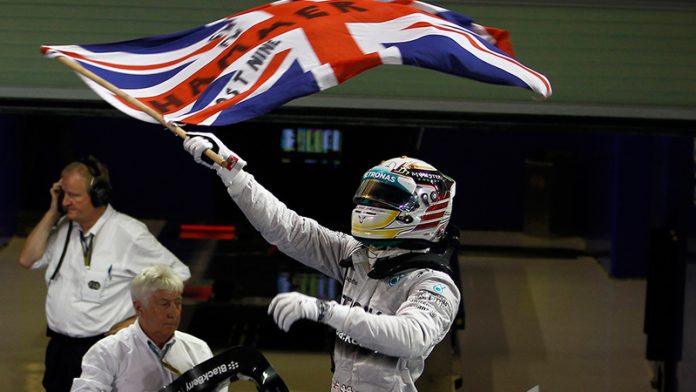 Hamilton, last season’s champion driver, set a time of 1 minute, 26.327 seconds at the Albert Park circuit; six-tenths of a second faster than teammate Nico Rosberg, as Mercedes made it a one-two in qualifying for the ninth consecutive race, dating back to last season.

Mercedes’ performance underscored the significant edge the team retains heading into the new season after an all-conquering 2014. Hamilton’s time was 1.4 seconds faster than third-place Felipe Massa of Williams – a giant margin in F1 terms.

Their dominance was summed up by third-place driver Felipe Massa of Williams, who grinned as he said: “They are in a different category.” It was the 12th straight pole position for Mercedes, moving the team into equal fourth place on the all-time list for consecutive poles, and given the performance edge it enjoys, the team could challenge the record of 24 set by Williams from 1992-93.

“I’ve worked hard with the engineers yesterday and today to find a good balance,” said Hamilton, who also became the first driver to win four poles in Australia. “Then, in the session, I just tried to push hard and put the pieces together. It’s so much fun when it works right, because this is the competition that I live for.”

The Briton’s race performances in Australia have not measured up to his qualifying efforts, with his last win in Melbourne coming in 2008. Last year, he started from pole but a misfiring engine resulted in his retirement after just two laps.

Rosberg said he was not too concerned by the wide margin between himself and his teammate and chief rival for the championship.

“Lewis was in impressive form today, did an awesome job and nailed it every time,” Rosberg said. “I didn’t get my laps together today. I’m not worried about pace at all. Maybe I can turn it around tomorrow. On Friday in the long runs I was very strong.” Ferrari drivers Sebastian Vettel and Kimi Raikkonen qualified in fourth and fifth, ahead of Valtteri Bottas of Williams. The two teams were closely matched as the best of the rest behind an out-of-reach Mercedes.

“We have four cars fighting with very similar times all the time,” Massa said. “It will be a big fight tomorrow with Ferrari especially.” Local favorite Daniel Ricciardo qualified in seventh as his Red Bull had another day of major problems with its Renault engine, even after his team replaced the power unit during Friday practice.

Both Ricciardo and teammate Daniil Kvyat complained over the radio about the car’s performance and the Australian had to be pushed back into the pits by stewards during pre-qualifying practice after his car ground to a halt immediately after exiting for a run. Toro Rosso’s Carlos Sainz Jr. qualified in an impressive eighth in his first qualifying race, ahead of the Lotus drivers Romain Grosjean and Pastor Maldonado.

It was a day to forget for McLaren – the most successful team in the race’s history – as its two cars qualified on the last row of the grid as the team struggles with its new Honda engine. After Sauber postponed resolving its legal dispute with ex-driver Giedo van der Garde until after the Australian GP, one of the team’s new drivers, Felipe Nasr, had a good run in qualifying, finishing just seven-hundredths of a second out of the top-10 shootout.

Van der Garde agreed on Saturday to suspend his challenge against the team over his contractual right to be a race driver this season. That allowed Nasr and Marcus Ericsson to compete in qualifying and Sunday’s race, but the issue remains unresolved and further legal arguments will resume next week.

The Manor team did not take part in qualifying and therefore will not compete in the race. The team only came out of financial administration two weeks ago and has faced an enormous task trying to prepare its cars without any testing and having to rebuild all the complex computer software. – Sapa, AP