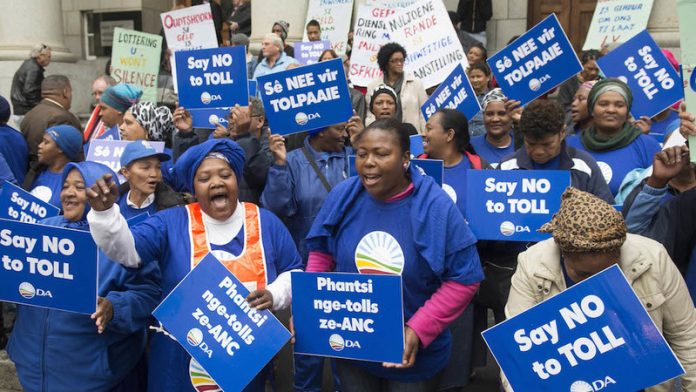 Right from the start it was clear the five judges of the Supreme Court of Appeal were unhappy with the judgment before them.

Hardly five minutes into arguments on Wednesday they commented: “One doesn’t like to be critical of sitting judges, but during the hearing it may be necessary to do so from time to time in unpacking the situation.”

The judges were hearing an appeal brought by the City of Cape Town and backed by a group of 11 organisations against a controversial court decision made in August last year in favour of the South African National Roads Agency (Sanral).

The roads authority and the city are involved in a long-running dispute over Sanral’s decision to toll the N1 and N2 into Cape Town. The city wants a judicial review of Sanral’s decision, but Sanral has insisted that certain crucial information relating to the project’s costs and profits, and the fees that the public will pay, should be kept from the public.

Last year Sanral asked the high court in Cape Town to order this information to be kept under wraps and came away with a most remarkable judgment, the subject of this week’s appeal.

Judge Ashley Binns-Ward found Sanral had failed to prove the information it wanted to keep secret was “confidential” and it therefore did not qualify for special protection. However, he said, Sanral’s documents are in any case protected by an existing high court rule and by a rule from British law he decided is part of South African law. Both rules prevent parties making Sanral’s information available to anyone else.

Registrar permission
In his judgment he fleshed out a new interpretation of the existing high court rule to mean that no one may access or obtain documents filed with the court unless the registrar gives permission. Permission would only be given to people with a direct legal interest in the matter, rather than to the general public.

The judgment has caused consternation. The rule has never been understood or interpreted in this way and it has seen a radical change in the way high courts, particularly in Cape Town but increasingly in other parts of the country as well, handle routine requests for copies of documents in court files.

Journalists, lawyers, academics and other members of the public have all been affected. They complain that it has become almost impossible to access documents from the registrar’s office, even in uncontentious matters. This affects their work and is a serious threat to the constitutional right to receive information, they say.

During this week’s hearing, Geoff Budlender SC, acting for the City of Cape Town, said the case had arisen when Sanral tried to prevent information reaching the public on the grounds that it would “cause alarm”.

The judges remarked that this is a “paternalistic approach”, asked whether Sanral is “trying to protect its reputation” and commented that it had been “a unique application” in that a litigant was using “a court of law to try to deal with the court of public opinion”.

Budlender said it is in the interests of justice for the appeal judges to pronounce on the proper meaning and application of the rule. Judges, lawyers and registrars have read the high court’s decision, he said, and unless the appeal court clarifies whether the rule should be interpreted to prevent routine access to documents, they will continue to be influenced by it.

Budlender discussed 10 reasons for the judgment to be set aside, including the fact that it has gone far further than Sanral originally requested by imposing a general secrecy over all court documents.

On behalf of the organisations and others that also wanted the judgment overturned, Wim Trengove SC said there is a “heightened public interest” in information held by the state in review cases because they are by definition based on allegations that public power has not been used properly.

He also challenged the new interpretation of the rule, saying that in its original setting it dealt with “excruciatingly boring issues” such as the colour of the ink and the kind of paper that had to be used in court documents. There is no indication in the rule that it is intended to have the far-reaching, punitive consequences of the high court’s interpretation, Trengove said.

If the new interpretation was correct, he said, it would result in “absurdity” because it is now an offence even for the parties to litigation to copy documents without the registrar’s permission. The rules of all other South African courts make it clear that documents are public. They “functioned perfectly well” without the restriction of this rule, Trengove said, adding that it is not clear why the high court should deviate from the “default position” that such documents should be open.

Johan Wasserman SC, for Sanral, tried to parry criticism of the judgment by the appeal judges, who noted that “the order given bears no resemblance to what was sought”. Wasserman said setting aside the Binns-Ward judgment would leave Sanral without the protection of information it needs.

At this, the appeal judges asked why Sanral did not cross-appeal the first decision. In the absence of such an appeal by Sanral, they said, the appeal court has no jurisdiction to do as Wasserman now asks.

Wasserman said, although Sanral had not won the order it had sought, it is happy with the protection it gained from the judge’s interpretation of the rule. He conceded that “in some respects” the rule, as now interpreted, is unconstitutional.

He said costs should not be awarded against Sanral as “we were not really opposing the appeal; we were just here to explain to the court”. Judge Visvanathan Ponnan commented that Sanral could have filed a notice to abide by the decision of the court, or it could have agreed that the judgment should be set aside. It had not done so, however: “If you are here to advance [Sanral’s] self-interest, why shouldn’t you have to pay if you lose?”

Perhaps the most telling questions about the high court decision were two linked queries by acting appeal judge Trevor Gorven, addressed to both Sanral and the city: “Were any of the orders sought [by Sanral] granted [by the high court]? Were any of the orders granted, sought?” In both cases, counsel for both sides agreed the answer had to be: “No”.

John Steenhuisen and Mbali Ntuli both acknowledged the problems faced by the party over the past year, with each of them offering their own leadership vision.
Read more
Politics