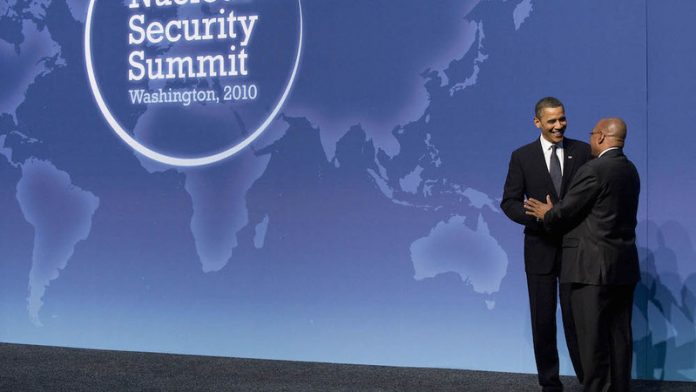 Frustrated by what they paint as President Jacob Zuma’s obduracy, President Barack Obama’s advisers are playing hardball to persuade South Africa to dilute or dispose of bomb-grade highly enriched uranium (HEU) left over from its apartheid-era weapons programme.

Readers of the Washington Post, easily agitated members of Congress among them, awoke on Sunday to the front-page headline: “S African nuclear plans unnerve US”. The subhead ran: “Quarter ton cache left over from country’s former explosives arsenal is seen as dangerously vulnerable”.

The thrust of the ensuing two-page spread was that the still mysterious November 2007 break-in at Pelindaba was not, as per the official version, a third-rate attempt to steal a few PCs. Little more than dumb luck, it was suggested, had stopped a professional gang from getting into the vault where the highly enriched uranium was stored and stealing enough for six bombs, “each powerful enough to obliterate central Washington”.

Developed for the Post by an independent investigative unit, the Centre for Public Integrity, the six-month-in-preparation story had a lot of help from someone in or close to the White House. The centre’s reporters had copies of letters from Obama to Zuma, which they placed on the centre’s website. Unnamed administration officials were quoted extensively.

With the impatient Susan Rice – of whom then-deputy president Thabo Mbeki once acidly remarked “I admire her somewhat” – running Obama’s foreign policy shop, American officials do not talk to the press unauthorised, on or off the record, if they wish to keep all their body parts.

The timing was interesting. South Africa’s continued enjoyment of nonreciprocally privileged access to the United States market remains uncertain as Congress readies legislation to renew the African Growth and Opportunity Act (Agoa) before it expires in September.

With Senators Chris Coons of Delaware and Johnny Isakson of Georgia as its champions, the US poultry lobby has been using the possibility of excluding South Africa from a new Act as leverage to persuade Pretoria to drop protective duties on American chicken thighs.

Others are in on the arm-twisting act. The pork and beef people gripe they are being excluded from South Africa by unwarranted food safety niggles. US manufacturers complain of facing higher tariffs than their European Union competitors because of the EU-South Africa free trade agreement. American drug companies say their intellectual property is under threat from Pretoria’s universal healthcare plans. Security firms are protesting against proposed local ownership rules.

Now into the mix throw this incendiary issue: South Africa, crime-ridden and notoriously loyal to dodgy actors, is not doing its bit to prevent bad guys from building bombs that could wipe out a quantum leap more than the twin towers of the World Trade Centre felled by al-Qaeda on September 11 2001. That takes things to a whole new level. National security: a level from which reason is routinely defenestrated. It is important, therefore, to take a step back, along with a deep breath, and look at the broader context.

In Prague in April 2009, in his first major foreign policy speech after taking office, Obama announced what he hoped would be a signature initiative: “a new international effort to secure all vulnerable nuclear material around the world within four years”. It has been remarkably successful, ridding 28 countries of highly enriched uranium and launching a series of nuclear security summits (to all of which Zuma has been invited) that have helped clear remaining obstacles to HEU removal.

But there are flies in the ointment. Belarus, not a nation associated with a brighter future for humankind, is one. South Africa is the other.

Still, the only country in the world to have acquired nuclear weapons off its own bat (more or less) and then voluntarily decommissioned them, South Africa has declined to join the 28. It shares Obama’s long-term objectives and has co-operated in important respects, becoming, at the technological level, a world leader in the use of low-enriched, nonweapons grade uranium (LEU) for peaceful applications. Nonetheless, it has dug in its heels about keeping its residual HEU stockpile.

Its motives, say those who have been exposed to them, are many. Abdul Minty, South Africa’s pre-eminent nuclear diplomat, now emeritus, argues that the country must use its highly enriched uranium as a bargaining chip to jujitsu the nuclear weapons powers into disarming – a position ambitious, idealistic and utterly unMandelaesque in its deficit of realism.

Others say South Africa’s HEU might yet have some valuable commercial application. Maybe, but the trend is in the other direction. It was thought you needed highly enriched uranium to make molybdenum-99, a valuable isotope commonly used in medical imaging. South Africa’s Nuclear Energy Corporation is now exporting Mo-99 made from low-enriched uranium.

Still others say that is all very well, but it is more expensive to make Mo-99 from LEU and South Africa can’t compete with Canada, which still makes it from HEU. So South Africa must reserve the right to continue using highly enriched uranium.

Then there are those who make the emotional argument. Obama wants to help South Africa to get rid of its HEU because he and his team think Africans can’t be trusted to look after fissile materials, even though Oak Ridge, the US’s Pelindaba, has had security breakdowns as egregious as those of November 2007. So to hell with those racist, hypocritical Americans.

It’s time for both sides to calm down, recognise they have a common goal and stop goading each other into counterproductive postures that play on each other’s insecurities and paranoia. The White House media strategy hasn’t helped. Neither has the pompously paranoid drivel issued in response by the department of international relations and co-operation’s spokesperson, Clayson Monyela: “We are aware there has been a concerted campaign to undermine us by turning the reported burglary into a major risk. Attempts by anyone to manufacture rumours and conspiracy theories laced with innuendo are rejected with the contempt they deserve.”

On getting a statement like that from the Nixon administration, reporters Bob Woodward and Carl Bernstein would have called it a nondenial denial – raising far more suspicion than it quelled.

Why not have said something like this? “We fully support President Obama’s efforts, as endorsed by the United Nations Security Council, to rid the world of the threat of nuclear annihilation while protecting the right of every nation to develop nuclear energy for peaceful purposes. We wholeheartedly share his concerns about the devastating consequences of highly enriched uranium falling into the wrong hands. That is why our nuclear facilities and stockpiles are all subject to full International Atomic Energy Agency safeguards.”

That would have been the truth, surely. If not, perhaps South Africa does not deserve Agoa benefits, or consideration for a permanent spot on the Security Council.

Simon Barber, a veteran Washington-based correspondent, has returned to journalism after 12 years as Brand South Africa’s US country manager