Mother mentors a boost for health

The paediatrics unit of the Soshanguve community health centre north of Pretoria is bustling. The benches in the waiting area and outside the consultation rooms are filled with children and their mothers waiting to be seen by one of the nurses on duty.

Happy Maifadi has come to see whether the results for her baby’s HIV test are back from the laboratory. Although she has been waiting for the results for several weeks now, Maifadi is not worried.

When testing for HIV in children younger than two years old, doctors test for the virus’s DNA in the blood as opposed to the standard HIV test that tests for antibodies. The antibody test is used for older children and adults, but is not accurate in the cases of babies because their antibodies are not yet fully developed. In South Africa, babies born to HIV-positive mothers are tested at six weeks and again at 18 months.

“I found out that I am HIV-positive when I got tested last year during my second pregnancy. I was hurt and upset by the news because I used to test regularly and my results were always negative,” says Maifadi. “But I’m sure [my baby] will be negative because I did everything as I was told: I’ve been taking my medication on time and I don’t mix-feed him. I only bottle-feed.”

Mix-feeding is giving the baby both breast milk and other foods or liquids, including milk formula and water.

Support for pregnant women
One in three pregnant women who, like Maifadi, use government clinics, is HIV-positive, according to the national health department. Pregnant women who are HIV-positive are given life-long antiretroviral (ARV) treatment to prevent them infecting their babies during pregnancy, childbirth or breastfeeding. The United Nations Children’s Fund (Unicef) estimates that, without proper intervention, 35% of babies born to HIV-positive women will contract the virus in the womb, during birth or during breastfeeding.

“I was immediately enrolled into a support programme at the clinic,” says Maifadi.

“They taught me about the stages of pregnancy, they counselled me about HIV, my CD4 count [a measure of the strength of the immune system] and how to take my medication. I also learned that as a mother who is HIV-positive it is possible for my baby to be HIV-negative.”

The support programme Maifadi was enrolled into is an initiative by mothers2mothers, an international nonprofit organisation that trains HIV-positive mothers and employs them to be mentor mothers who, along with nurses and doctors, provide education and psychosocial support to other HIV-positive mothers. The organisation works in 100 sites in areas with high HIV infection rates.

Nellie Koka, the organisation’s district manager in Gauteng, says: “We work with the provincial health department. The department identifies the facilities that have high numbers of HIV-positive women and that is where we go. This clinic was one of the facilities with high positivity rates, hence we are here. We’ve been here since 2008.” 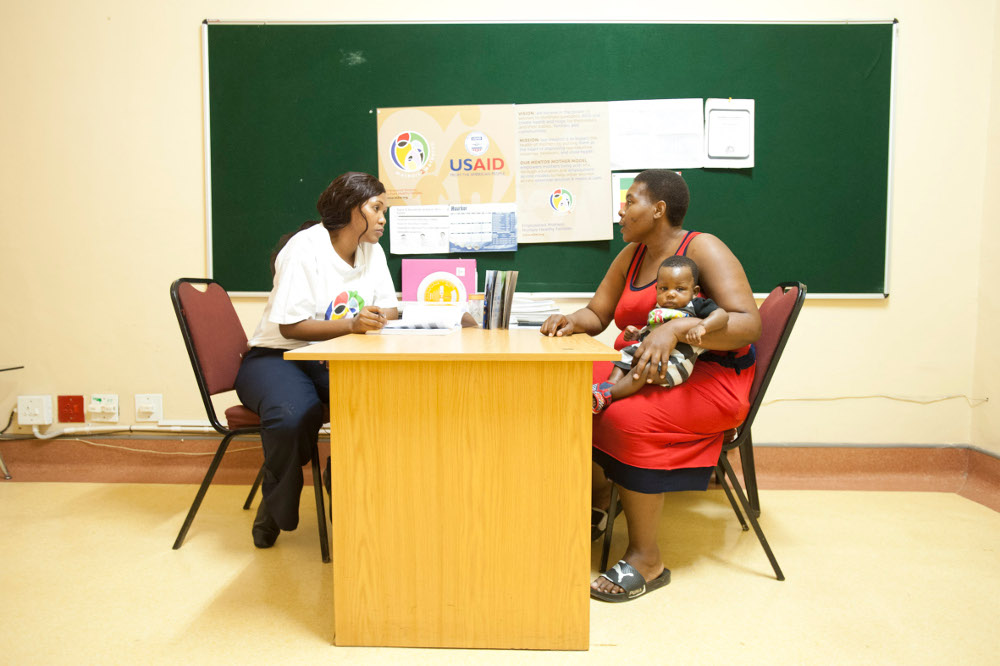 Full circle
One of the first women who benefited from the organisation’s presence at this clinic is Velna Malobolo.

“I found out that I was HIV-positive in 2008 when I was pregnant with my first child. I came to the clinic for an antenatal visit and I tested positive.

“I was scared because I had tested negative the year before. I was so confused. I thought that maybe they had made a mistake. So I went to town that same week and tested once more. The test came back positive again. It was very painful, but I had to accept that I have HIV.

“I was stressed by what I thought people would say: I have a child, I am still young and they will say that I like sleeping around, that’s why I am HIV-positive. I was scared that my baby would also be HIV-positive.”

Malobolo’s child, who is now six years old and in grade one, is HIV-negative.

In 2012, when Malobolo fell pregnant with her second child, she was again enrolled in the mothers2mothers programme, where she attended support group sessions and was assigned a mother to support her. Later that year she was offered a contract to become a mentor mother so, in a reversal of the roles, Malobolo would be the one providing support to other HIV-positive mothers. Now she is one of three mentor mothers based at this clinic.

Peer support
‘The mentor mothers are not medical personnel; they are peer supporters who are specifically trained to provide HIV- and pregnancy-related peer education and support to women at this clinic,” says Koka.

“They have more time to spend with the client and they share one thing in common with the clients. So the clients will feel more comfortable with a person they share a status with – this is why our mentor mothers must also be HIV-positive. We want them to be able to fully empathise with the women they mentor so that they can learn from one another. They must take the client through the path that they went through.”

Through support groups and one-on-one sessions mentor mothers support HIV-positive mothers by providing advice on how best to protect their babies from infection.

In South Africa, all pregnant women attending government clinics are offered HIV testing. If a woman is diagnosed with HIV infection she is started on ARVs that are provided to her for free for the rest of her life. The ARVs help to suppress the mother’s viral load [the amount of HIV in the blood], which reduces the risk of her infecting her baby during pregnancy, childbirth or breastfeeding. Babies born to HIV-positive women are given an antiretroviral syrup, nevirapine, from birth up until 12 weeks of life to reduce their chances of contracting HIV.

Research studies have shown that babies who are exclusively breastfed are three to four times less likely to contract HIV than babies who are mix-fed. According to Unicef: “It is believed that mixed feeding in the first six months carries a greater risk of [HIV] transmission because the other liquids and foods given to the baby alongside the breast milk can damage the already delicate and permeable gut wall of the small infant and allow the virus to be transmitted more easily.”

The prevention of mother-to-child transmission of HIV in South Africa has been lauded as a huge success, with government figures showing less than 3% of children born to HIV-positive mothers becoming infected.

“Now we see even the HIV-negative pregnant women and mothers using our services because they don’t get the education HIV-positive mothers are getting. So now they are our responsibility as well. If they are negative we want them to stay negative and then if it happens that someone’s status changes, they need to be able to deal with the situation,” says Koka.

Life changing
Malobolo says that, apart from the support she received from her mentor during her pregnancies, being a mentor herself has changed her life for the better.

“I was not working and I didn’t have any interest in working or studying or anything. I was just sitting at home waiting to die. Since I’ve met mothers2mothers, they’ve given me hope.

“When I was sitting at home I had no idea what I was missing. But as we are training and working at the clinic I started to think: ‘Why don’t I do something with my life?’

“They showed me that there is life after HIV. I can still live and I can be anything that I want to be in life. When my contract here ends I am going back to school. I want to do nursing because I also want to help the children here at the clinic.”