The case of the disappeared activist in Zimbabwe 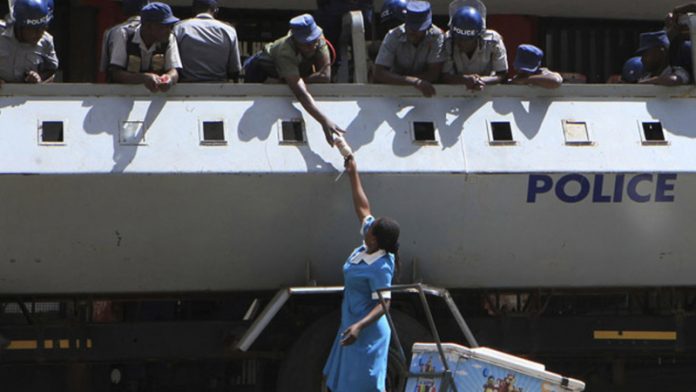 Activist Itai Dzamara was getting his haircut at the local barbershop when five armed men seized him, shoved him into an unmarked truck and sped off. He hasn’t been seen since.

Dzamara (35) is a journalist and opposition supporter who spearheads a pro-democracy movement called “Occupy Africa Unity Square” that is demanding long-standing President Robert Mugabe to resign.

The barber – who declined to give his name fearing reprisals – told Al Jazeera that Dzamara’s captors accused him of cattle theft, handcuffed him, and drove off at high speed. His abductors were earlier spotted cruising around the neighbourhood in two vehicles, he said.

A week after his kidnapping, Sheffa Dzamara, the journalist’s wife, said she prays he returns to his family safely. Their two children are distraught by the disappearance of their father, she said.

“They miss their father and ask for him every day,” she told Al Jazeera, unable to hide her emotions. “It is so difficult to explain why he can’t be with them. The kids love him dearly.”

Sheffa said she’s approached the authorities repeatedly, but no one has been able to help her.

“I am tired, I cry myself to sleep every day … I pray every day for his safe return,” she said with a trembling voice.

It is also a stone’s throw away from Mugabe’s office and has been the theatre of Itai Dzamara-led sit-ins demanding the resignation of the 91-year-old president and new elections. He has had fierce run-ins with anti-riot police, and has been frequently detained without charge and beaten.

Dzamara’s older brother, Patson, recently spoke at a news conference in Harare, saying the family “still hold on to hope even though the worst is indeed a possibility. We keep on praying”.

“As a family, we do not know where he is,” Dzamara’s brother told the media gathering packed with reporters and foreign diplomats.

“We can only make assumptions. The past week has certainly been one of the most tumultuous and tormenting for us as a family. We admit that we are dealing with [a tragic] and complex situation.”

The leader of the opposition Movement for Democratic Change (MDC) party, Morgan Tsvangirai, issued a statement last week saying he holds President Mugabe and his security agencies responsible for Dzamara’s abduction – an accusation angrily refuted by the government.

“I’ve said I do not have any information whatsoever about that matter, and that’s my honest and final truth,” Moyo said.

Describing the abduction as “barbaric”, Vice President Emmerson Mnangagwa told parliament last week he could not confirm that Dzamara was arrested or is in government custody.

Call for mass demonstrations
Two days before Dzamara’s abduction he delivered a speech at an opposition rally in Harare, offering solidarity with the MDC for mass protests against the deteriorating political and economic situation in Zimbabwe.

“We are in no doubt as to the perpetrators of this abduction,” Tsvangirai told the news conference. “We hold Mugabe and his regime responsible for this morbid and senseless act.

“The president – who is also the AU [African Union] and SADC [Southern African Development Community] chair – cannot preside over a country where innocent citizens get abducted and disappear.”

The United States and European Union called on authorities to immediately investigate the disappearance.

“If he is being held in state custody, it is vital that his fundamental human rights and freedoms – as guaranteed by Zimbabwe’s constitution – be honoured,” the US Embassy said in a statement.

The EU said Zimbabwe’s government should “take all necessary measures to ascertain Mr Dzamara’s whereabouts, safeguard his well-being, and accord him the full protection of the law”.

The Zimbabwe Lawyers for Human Rights successfully filed a habeas corpus application at the High Court ordering senior security officials “to do all things necessary to determine his whereabouts”.

High Court Justice David Mangota also directed a team of police detectives to work closely with Dzamara’s legal team to search for him.

“The Zimbabwe Republic Police is appealing for information on the whereabouts of Itai Peace Kadiki Dzamara, aged 35 years,” said a police statement issued with contact details.

Not the first time
Many Zimbabweans have disappeared since the country gained independence from Britain in 1980.

Dewa Mavhinga, a senior researcher with Human Rights Watch, said there were no exact figures on how many people had been forcefully abducted, “but what is certain is that thousands have disappeared.”

“NGOs extensively documented cases of thousands of enforced disappearances of civilians in Matebeleland and Midlands provinces between 1983 and 1987, during the period that later became known as the Gukurahundi massacres,” Mavhinga told Al Jazeera.

“None of those implicated was ever brought to justice. Instead, President Mugabe issued a blanket amnesty pardoning them.

“Outside of state involvement, people do not simply vanish from the streets of Zimbabwe without the police establishing what happened,” Mavhinga said.

McDonald Lewanika of the Crisis in Zimbabwe Coalition – a conglomeration of more than 350 civil society groups – said Dzamara’s abduction was “a sad reminder of a politics that we thought we were leaving behind as a country”.

“It is a sad and scary indicator of the future that we are headed towards as a country, where people are abducted, kidnapped, beaten and killed on issues of fundamental interest to the polity,” Lewanika said.

“The state is clearly complicit in this matter and needs to do everything it can using all its structures to ensure that Dzamara is brought back home safe and sound – otherwise the people’s confidence in the state’s ability to protect them will wane, and that is not a good thing.”