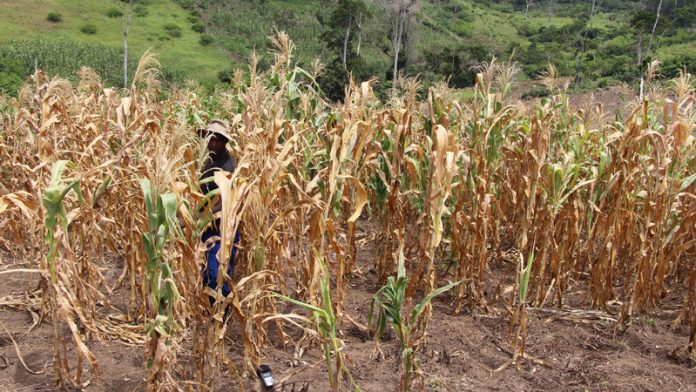 The village of Bulawo in Port St Johns is tucked away deep in the hilly valleys of the pristine Wild Coast of the Eastern Cape. The beauty of this coastal village is breathtaking, with waves crashing on the rocks and lush forests extending as far as the eye can see.

The climate here has made cultivating dagga (Cannabis sativa) popular since people settled here centuries ago. Dagga is a staple of traditional medicine, used as medicinal tea and given to sick people and livestock for a variety of ailments. Healthcare services in these remote parts are a long way away, with the closest hospital over an hour’s drive by 4×4 vehicle. Most villagers are unemployed, and farm livestock, maize, sweet potatoes and beans to sustain themselves and their families.

As we approach, we are greeted by children carrying water from the nearby river. There is no running water here and rivers are its only supply. The man we are here to see is Gamede (not his real name), who is in his 60s. We are told we cannot enter his household for an interview because his family is in mourning. His six-year-old grandchild died a few days ago after vomiting for three days. He greets us on the road. “The helicopters came and sprayed something here that is making our people and livestock sick.”

An old woman passing by stops to look over the visitors. She tells us that her goats are having miscarriages: “They drink the water that was sprayed. We all do.” She shakes her head as she continues on her way.

Panacea or poison?
When I contacted the police’s Major General Vuyisile Ngesi for comment, he referred me to an official statement on the South African Police Service’s website. It says that 500 hectares of cannabis fields in these villages have been sprayed with the herbicide Kilo Max, and disputes claims about it being unsafe or detrimental to the environment. “The dosage used is so minimal that it only kills the dagga plant,” the statement says. But this is not what we saw in Bulawo: maize fields destroyed and people complaining about falling ill.

The active ingredient in Kilo Max is glyphosate. Before it is sprayed, people in the area must be informed so they can avoid contact with it.

But residents of this village claim they were not informed. In fact, Gamede tells me that, when the helicopters flew over his maize fields, “they sprayed me and my cows. I was soaking wet and my cows ran off in a panic. The helicopters were flying so low I could see the pilot laughing at me as I put my hands up and on my stomach to show him that this is my food.”

The use of glyphosate has raised many concerns around the world. In 2011 coca crop spraying was suspended after villagers took to the streets in Colombia’s Choco region, complaining that the herbicide used to destroy coca (from which cocaine is extracted) also kills their food crops and domestic animals, poisons their water and damages their health. Peru, Bolivia and Afghanistan have also stopped aerial spraying.

Calls for global ban
Vanessa Black of Earthlife Africa, an environmental justice nongovernmental organisation based in Durban, echoes these concerns: “Glyphosate is a herbicide, so any spray that lands on nontarget vegetation such as crops and wild plants will kill them,” she says.

“Contrary to industry claims, glyphosate does not disappear – it remains in the environment, especially in the water systems, where it impacts many species. Government and the general public need to seriously consider the far-reaching impacts that this war on dagga is causing to the people of the Eastern Cape – an economically poor area where multiple livelihood strategies ensure life.”

Independent ecologist, botanist and environmental consultant Dr Derek Berliner, in an article in the Daily Dispatch titled “Cops spraying dagga on Wild Coast a deadly risk” (http://www.dispatchlive.co.za/news/cops-spraying-dagga-on-wild-coast-a-deadly-risk/), wrote: “Weed killer containing glyphosate was developed by Monsanto for use on genetically modified (GM) crops. Because these crops are resistant to the effects of the herbicide, it can be sprayed all over them and will kill all the weeds, other plants and grains, but not these GM crops.”

Berliner said that scientific evidence pointing out the considerable environmental and health dangers of glyphosate-based herbicides such as Kilo Max has been documented by the Institute of Science in Society, which is calling for a worldwide ban.

The Bulawo communities grow dagga to earn a little money to send their children to school. Says one resident: “This has destroyed us. Our food for the year has been destroyed; our animals are sick, some dying. We don’t have banks here. Our currency is our crops and our livestock. Crime will increase because our children will be starving, then they will go to jail – a vicious cycle. How can our government do this to us?”