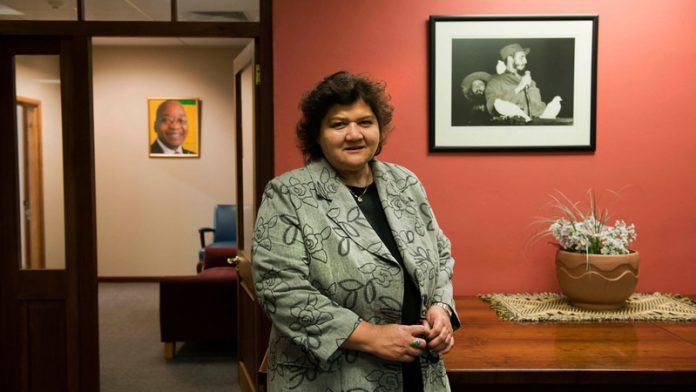 Public Enterprises Minister Lynne Brown believes she is doing all she can to help bring stability to Eskom but cannot get involved in the day-to-day operations without breaching the Companies Act, which prohibits political interference in the power utility.

Speaking to the public enterprises portfolio committee in Parliament today, the minister said she was worried about Eskom, but her hands were tied about how far she could get involved in trying to resolve the issues facing the power utility’s board.

Last week the board reportedly unanimously resolved to pass a motion of no confidence in its chairperson, Zola Tsotsi, accusing him of interfering with the executive, signing off documents on behalf of Eskom and, in the process, undermining the chief executive and other executive directors.

Suspensions
Anticipating the committee and answering the question before it could be asked, Brown said Tsotsi was still the chairperson of the board as she had not been informed of his removal.

“I have not been officially informed, and this is in terms of the memorandum of incorporation. The memorandum says that the board must tell the minister, or the shareholder, what they want to discuss in relation to an individual member, then the minister must give permission for that discussion to happen. The board must take the resolution and the resolution must be sent formally to the minister, and the minister then applies his or her mind to take a decision. So we are in that last phase. I have not been formally told by the board.”

She said she did not know whether the decision would be made at today’s board meeting.

‘Not really a struggle of power’
Brown said she wanted Eskom to stabilise as quickly as possible. “But I am hamstrung by the Companies Act that says that there should be no political interference and no interference in the running of the board.

“But I have asked my department and have spoken to the acting director general to give me some legal opinion about how far I can go because I think we are all reliant on how we are able to manage Eskom in the future.”

The minister insists the board is largely united. “If, on a board of 13, 12 work together and one doesn’t, don’t you go with the majority? I’ve actually been quite impressed with the board, and I think some of the issues have struck us too quickly, but generally I think this board will see us through.

“There is not really a struggle of power in the board. Part of it is that the board is largely united, the fact that they are making a decision around a chair doesn’t mean that the board isn’t united. They could be united in wanting to get the chair out, or the chief financial officer. It’s largely united and it is too young for the board to be factionalised yet – that’s my sense of the board from where I’m sitting.”

Brown said, even though she could not get involved in the day-to-day business, she did take stewardship responsibility when things went wrong.

No danger of a national blackout
Economic Freedom Fighters MP Kgotso Morapela called for the minister to be bold enough to give proper direction.

Brown said she was doing all she could within the limitations she faced.

Committee chairperson ANC MP Dipuo Letsatsi-Duba said: “We are worried that this strategic asset is having leadership problems and we hope with the capability of your department and yourself that you will assist us in bringing stability in relation to that leadership. We need to interact better so we don’t just oversee the situation but come up with solutions.”

Questioned by the MPs about loadshedding, the minister said it would continue for the next two years.

“There is a lot of engagement with big business, so that we do it minimally and within a prescribed time and possibly over weekends only. And that’s it’s fixed and consistent. We have to do this to avoid a national blackout. But we have not come close to a national blackout.”