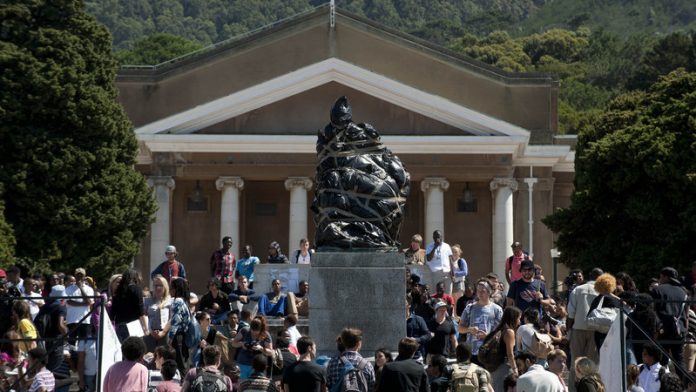 Defacing colonial-era statues in the name of transformation is not the revolution – it’s just a symbol of it. But don’t let critics of the student protests that are rocking South Africa persuade you that this part isn’t as crucial to revolutionising racial and cultural representation at universities as the other parts are – the debates, the policy changes and the employment of more black academics. Every protest needs a face. The face of this one is all about defacing those made of stone and as rock-hard as the white privilege belief system standing in the way of real change.

And now there is a new defaced face to add to the face of the movement. It belongs to the statue of King George V at the University of KwaZulu-Natal. On Thursday students discovered that someone had thrown white paint on it and attached a sign to it that reads: “end white privilege” on its statue of King George V. This was the ruler of the United Kingdom for more than twenty years until his death in 1936 – the empire that colonised South Africa.

Over the last two weeks social media feeds have been filled with photos of the Cecil John Rhodes statue, which occupies a prime position at the University of Cape Town. The statue’s face is covered by black plastic bags, and at the start of the protests over its removal in early March, it dripped with human faeces courtesy of an angry student.

At UCT where students are gathering to march for the removal of the statue of Cecil John Rhodes. #RhodesMustFall pic.twitter.com/5ESDLnrODt

Rhodes University has a less physical face to deface. It is contending with the prospect of calling for its institution to change its clearly colonial-era name. In the meantime, it is making its anger about white privilege known.

The revolution, as some  students refer to it as, has now bled into other universities, and has received very different reactions. What seemed to start as a frenzied throwing of faeces at a statue at UCT, has now turned into a seemingly well-supported and structured movement at the university. Rhodes University has a smaller grouping but has pledged its passionate support for the UCT movement by holding solidarity marches.

But students at UKZN have so far expressed shock and confusion about the defacing of their colonial statue and no one has claimed responsibility for the act. This “revolution” is colourful, layered, and it changes pace almost every day. What we will wait for now is to see how far its blood seeps into other formerly white institutions like Stellenbosch University, for example.

Until then, no statue’s face is safe. And maybe it shouldn’t be.

Rare orchid lures unwitting beetles for sex to pollinate itself