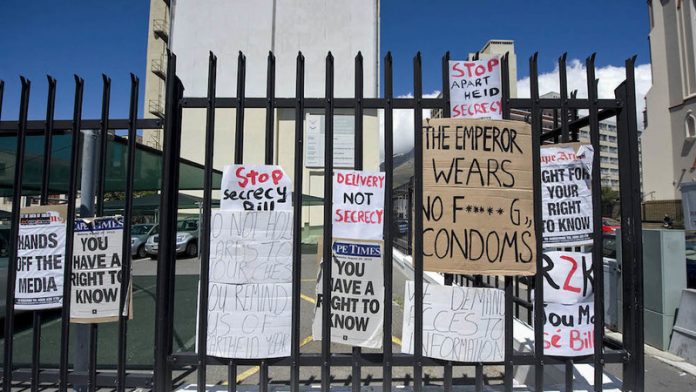 I am grateful that the conversation about threats to press freedom has featured so prominently in the news recently, because it is something I care deeply about. Which is why I was so puzzled by the deputy editor of the Mail & Guardian, Moshoeshoe Monare, leading the assault on media freedom in last week’s issue of the newspaper.

I have rarely, if ever, read such an unbridled attack on journalists and journalistic integrity than Monare’s article, which appeared under the ironic headline “Helen Zille has assaulted press freedom“.

Most of this piece was a direct assault by Monare on the journalistic integrity of his colleagues and former colleagues. The crux of his “case” is that successive editors of the Cape Times allowed themselves to be manipulated by me until Aneez Salie came along and put a stop to it.

What an extraordinary insult to Tyrone August, Chris Whitfield, Alide Dasnois and Gasant Abarder. Perhaps Monare will explain to these former editors just how and where he believes they let themselves and the publication be used? Which, of course, he won’t, because it is absolute hogwash.

I have had some robust interchanges with some of these editors over matters of fact and interpretation, often with a singular lack of success. For example, when the local “Independent” newspapers (including the Cape Times) supported former premier Ebrahim Rasool’s attempts in 2007 to launch a political hit squad (under the guise of a judicial commission of inquiry) to bring down the Democratic Alliance-led coalition government in Cape Town, I tried in vain to explain to local editors what was really going on.

They rejected my analysis and accepted Rasool’s argument that the DA-led government may have committed a crime that needed to be investigated outside of the conventional court system – an argument that should surely raise suspicions of a political agenda.

Only when the high court exposed Rasool’s strategy for what it was – an unlawful attempt to bring down a legitimately elected government – did the newspapers change their tune. But then, of course, it emerged that some of “Independent” newspapers’ own journalists were being paid to be praise singers for Rasool. And, all the while, every time I complained, their editors defended them to the hilt. In this context, it is a rich irony indeed for Monare to claim that I fulfilled the role of “editorial commander-in-chief at the Cape Times“.

Monare also assumes that, although journalists phone politicians at any time of the day or night, politicians cannot (for some unexplained reason) ever phone an editor or a journalist to point out factual inaccuracies, misquotes or various other breaches of the media code (although they always seem pleased to receive calls about possible “scoops”).

Many competent editors take a different view. They believe it is entirely appropriate for journalists to speak to politicians and vice versa, when articles are being researched, and when the subject of a report wishes to raise issues relating to inaccurate, tendentious or even plagiarised reporting.

Abarder, a former editor of both the Cape Argus and the Cape Times, recently wrote about the interactions I had with him while he was an editor between 2009 and 2013. “When I was editor,” he wrote, “Western Cape Premier Helen Zille called me regularly and I had a line to her as well. Our exchanges were robust and frank, as it should be, and I would often concede to her well-argued points when the paper got it wrong.”

And, in turn, I recall that Abarder argued his points with equal force and took a strong line when he thought it was appropriate. He sometimes convinced me, and sometimes we agreed to disagree.

But the point is that these interactions pose no threat at all to media freedom. Indeed, they are valid and important in any society where newspapers are striving for accuracy. And it is a profound insult to any editor to allege that, if he is prepared to engage in such interactions, he is allowing a politician to become “editor-in-chief” of his newspaper.

Monare, by contrast, is one of those journalists trying to sustain the myth that if a reader (or the subject of a report) points out factual inaccuracies, plagiarism and sometimes downright lies, they are “assaulting press freedom”. This false assumption is based on another myth – that journalists are the only category of human beings motivated nobly and solely by the search for truth, that they have the unique ability to find it, and that they then fearlessly speak that truth to power. Most people can now see through this self-serving argument posing as high principle.

Some journalists need to hide behind this principle to cover sloppy preparation, inadequate research, incapacity to take accurate notes and often a not-so-hidden agenda. Obviously they do not want to discuss the resulting reports. It is much easier to pretend that any attempt to do so is an attack on media freedom. Removing this fig leaf is a contribution to media freedom, not an attack on it.

Monare also concludes that our decision not to renew the Cape Times subscription couldn’t possibly have been because of the poor quality of the newspaper, because I am prepared to appear on the SABC despite its quality and political bias.

Surely I don’t have to explain that reaching people through a publication or news channel and subscribing to it are two entirely different things? And that the Western Cape government can choose which publications to subscribe to?

But Monare seems to be under the impression that I am “strictly regulated by the Constitution and by administrative law” to justify decisions such as the nonrenewal of newspaper subscriptions. I tried to find this puzzling clause in our Constitution, but have come up empty-handed. I’m sure Monare will point me in the right direction.

Helen Zille is the leader of the Democratic Alliance