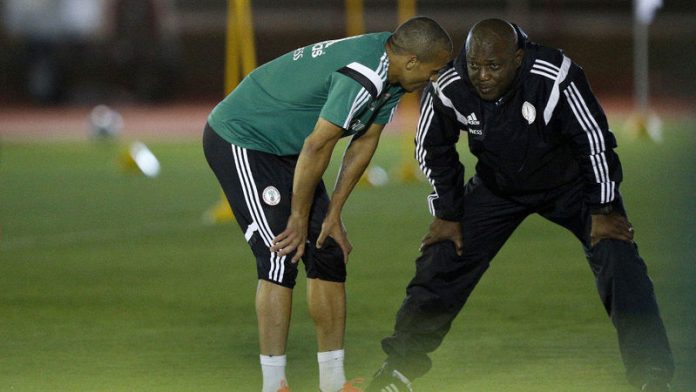 South African television viewers did not get to watch their own national team in midweek but, by flipping enough channels, would have been able to see Nigeria beaten at home by Uganda.

A blackout from Swaziland denied Bafana fans the opportunity to see the side winning 3-1 on Wednesday but the team they faced next were in high-definition decline as the Super Eagles went down 1-0 to the Cranes of Uganda. Another reversal for Nigeria emphasises the current malaise the side, who were African champions just over 24 months ago, has descended into.

They will arrive in South Africa on Friday for the March 29 friendly international at the Mbombela Stadium in Nelspruit – a fairly dispirited lot who are a far cry from the status of continental footballing superpower.

Failure to qualify for the African Nations Cup finals in Equatorial Guinea earlier this year meant Nigeria were unable to defend the title they won in Johannesburg in early 2013. South Africa contributed to their inability to get through the preliminaries although Shakes Mashaba’s team did not beat them, drawing both qualifiers.

A Bafana win over Nigeria has happened only once in past meetings between the two countries, with Shaun Bartlett and Benedict Vilakazi the goal-scoring heroes on a November night in 2004 at a half-empty Ellis Park.

Lopsided rivalry
That was a friendly match, with South Africa fortunate to scrape through, but in competitive action Nigeria have romped past Bafana several times. There was the blitzkrieg at the old Surelere Stadium in Lagos in 1992, when a naive Bafana were lucky to lose only 4-0, and an embarrassing thumping by the same scoreline at the Nations Cup finals in Tunisia 12 years later.

It is a rivalry that has been largely lopsided but it can be safely argued that the latest Nigerian side to arrive on South Africa soil is the poorest yet and gives Bafana an opportunity to arrest the one-sided nature of the head-to-head statistics.

Nigeria have a paucity of international-class players at the moment, a generational dip you can call it, which affects most teams at some stage.

Matters are made worse in Nigeria’s case because their administration is in a perpetual state of turmoil and there is uncertainty about who will coach the side in the immediate future – with the 2018 World Cup qualifiers on the horizon.

Stephen Keshi is said to be heading back for a third stint as coach in an appointment forced by political machinations. As both past captain and coach of Nations Cup-winning sides he still enjoys major popularity, but his credibility has waned with the team’s recent failures.

While the reappointment of Keshi is awaited, his erstwhile assistant Daniel Amokachi is taking charge. The Bull of Kaduna was one of the stars of a team at the height of its prowess in the 1990s and among the many high-profile exports to top European leagues from Africa’s most populous nation.

Nowadays, it is a challenge to name a Nigerian footballer in Europe. Chelsea’s John Obi Mikel will probably be the name most frequently evoked but he is far from a regular choice and is currently injured.

It remains to be seen whether this dip is temporary or Nigeria are in irreversible decline now after years of organisational malaise. It is likely the former because, with a population of more than 100-million people, there is always going to be a reservoir of talent and only last weekend Nigeria again won the African under-20 championship.

A promising new generation suggests a comeback but in Nelspruit on Sunday they present an eminently beatable side.