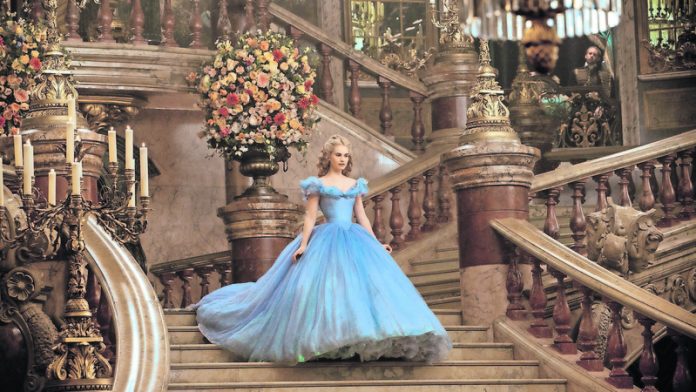 I wonder what old dead Walt Disney might have made of Kenneth Branagh’s live-action remake of his classic animated 1950 version of Cinderella. Back then, it was still widely supposed that every girl’s dream was to marry a handsome prince and live happily ever after in a Tyrolean castle attended upon by mice and dressed each morning by bluebirds. These days, I thought, maybe not so much.

But I was wrong, judging by the massed ranks of ecstatically expectant preadolescent girls at the multiplex recently. (I confess I felt a lot like John Waters in the 1980s, when he attended – for research purposes, and alone – a Saturday-morning screening of The Care Bears Movie during the notorious McMartin preschool devil-worship and child-abuse trial.) Judging by the rapturous remarks I overheard in the crowd on the way out, the preteen girl demographic is still the best-served in Hollywood. Would that we adults were so lucky.

I wonder, for instance, what Uncle Walt – who was no progressive himself, what with his interwar flirtations with Midwestern fascist groups such as the Silver Shirts, and the millstone of Song of the South around his neck for ever – might have thought of Prince Charming’s black best friend (the ever-watchable Nonso Anozie), and his question: “Does she have a friend for me?”, which would have been lynch-worthy stuff in the pre-civil rights-era South.

On the other hand, the whole point of this remake – and others, such as Maleficent, that are part of the same revisionist live-action project – is to reorient ancient name-brand Disney material for the Katy Perry generation, and Branagh turns out to be exactly the man for that job.

He takes the material as seriously as Hamlet or Henry V, and casts for Shakespeare not JK Rowling. On a bedrock of actorly depth and writerly conviction (from Chris Weitz), he constructs a fable that’s evergreen-familiar but slightly modernised and stylised, too, and much more English in tone than the animated original, which is market-savvy these days, considering that Rowling and Peter Jackson have spent the past 15 years remaking the whole world’s postmillennial childhood into a 1950s English one.

This all being said, the appeals to the Bunty-Princess Tina comics mind-set are entirely intact. Mice for friends? Bluebirds on the wing? Check! Ponies? To the max! It’s still as girly as all get-out, but isn’t that the whole point?

And yes, the messages within are all very safe and be-nice: “Have courage and be kind” is Cinders’s mission statement, which is at about the same level as “Make good choices!” as an inspirational mantra (or parental exhortation). It’s not Frozen and it’s not Brave – it’s a little more conventional, a little less reckless and abandoned than those (wonderful) movies – but it’s got Cate Blanchett as the Wicked Stepmother, and you can’t ask for more than that. – © Guardian News & Media, 2015