How I became a Muslim bride 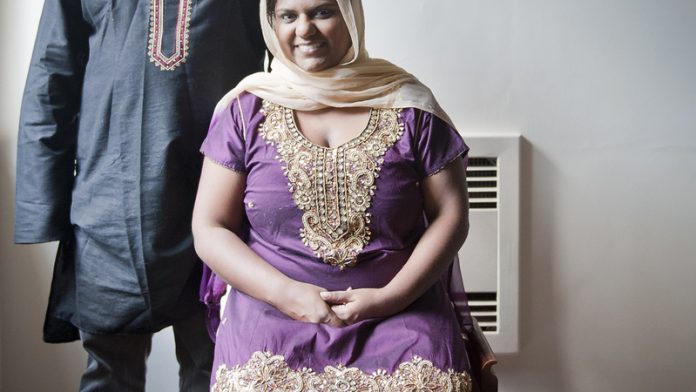 With henna on my hands and my head covered in a scarf, I went to my wedding. My sister-in-law had helped me drape my purple and gold punjabi in a way that would cover me from head to toe, except for my face.

It’s not customary for a Muslim woman to attend her own wedding ceremony. But my wedding wasn’t held at a mosque, it was at my in-laws’ home. So, instead of sending a male representative to give my consent to be married, I did it myself.

I had to choose a Muslim name. I chose Nilufer, meaning “water lily”, after a dear friend I know from Turkey. It wasn’t about the meaning of the name itself but rather about taking a name of something familiar because I was in uncharted territory.

My husband and I both read the words: “Lã ilãha illã-llãh, Muhammadur rasulu-llãh“, meaning, there is no god but Allah, and Muhammad is His messenger.

And just like that, I became a Muslim wife.

I was raised in Durban as a Hindu and educated as an atheist but, in just a few minutes, my identity was completely different. I had a different name, a different surname and had married into Islam.

Being married into a Muslim family definitely has its perks. I mean, the food itself is reason enough. Eid briyani is just the best, not to mention samoosas and tea after sunset during Ramadan.

But I have come to understand that it’s more than just a way of life. For most Muslims, Islam is what gives life meaning.

WhatsApp prayers
Looking from the outside, I see what comfort religion brought to my mother-in-law when her mother passed away recently. The family coming together, praying together – and in a contemporary twist, even setting up a WhatsApp group to keep track of their prayers – was something I had only ever heard of or seen in Bollywood movies.

But I also see my mother-in-law’s disappointment when she looks at me wearing sleeveless shirts, a bold tattoo on my arm and having little regard for tradition.

I know she wishes I would eventually become that person in the scarf the day my husband and I took our marriage vows in Arabic.

For me, it was a formality, a way to honour my spouse and his family. For her, it was a promise that, one day, my soul would be absolved. Regardless, she welcomed me with open arms.

I’m never going to be Muslim. Aside from enjoying bacon way too much for my own good and a glass of wine every now and then, and not having the time or energy to pray five times a day, I just don’t have it in me.

It’s not just about the ritual, as I am discovering from observing my in-laws – I find the ritual peaceful. It’s about putting one’s faith in something unseen, unheard and unknown, which, as an atheist, I do not have the conviction to do.

But I have discovered some similarities in what my in-laws and I believe, and that is that there is something greater out there. Be it Allah or science, we are all searching for a truth that is greater than ourselves.

Although I have no idea what they’re saying to each other in that WhatsApp group when they talk about tasbeehs (prayer beads) and duas (prayers), I can respect that it’s something that brings us together as a family.

I may not be Muslim, but I am most definitely a part of that family now. Saying those arbitrary words in Arabic all those months ago didn’t make me Muslim. But it did give me something greater. And that was people I can believe in.