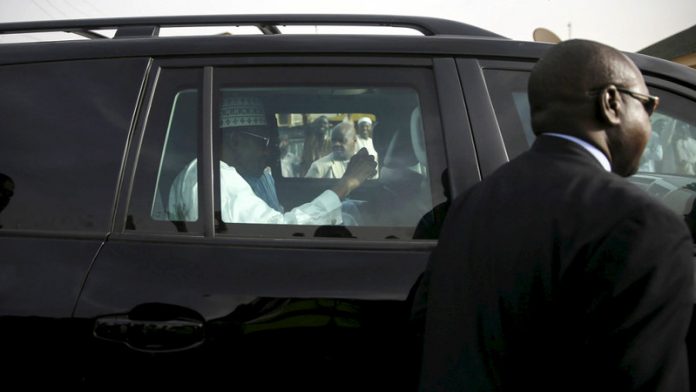 South Africa is considering returning more than R100-million in Nigerian money that it confiscated last year, or clearing the way to sell arms to the West African country.

The Mail & Guardian has learned through diplomatic sources that South Africa has begun talks to work out a process to return the money in an effort to start off on a clean slate with the recently elected government of the Nigerian president-elect, Muhammadu Buhari.

South African law enforcement agencies seized $15-million in two batches: $5.7-million that had been wired to Standard Bank and $9.3-million in cash, which was confiscated. It was brought into the country through Lanseria airport in Johannesburg in three suitcases by a delegation said to represent the Nigerian government. In both cases, the money was suspected to be for illegal use.

Now South Africa wants to use the money to extend an olive branch to Buhari’s government and mend relations between the two countries, which became strained during the tenure of outgoing president Goodluck Jonathan.

“The positive thing about [Buhari] is that one of the people who supported him is Atiku Abubakar. That makes him our man and he will automatically work well with [President Jacob] Zuma,” a government source said.

Close connection
Abubakar is close to Zuma. He was Nigeria’s deputy president during the presidency of Olusegun Obasanjo, at the time when Zuma was Thabo Mbeki’s deputy.

“Also, this man [Buhari] is a [retired] military general. It is true that the military needs some beefing up to fight Boko Haram and we should help,” the source added.

So how will Nigeria know that it stands to benefit from an otherwise controversial transaction that had exacerbated tensions between the two countries?

Explained the government source: “Diplomatically you send a signal. Obviously they will have to make a request once they receive a positive signal, but the request will just be an official step to finalising the transaction.”

Buhari is due to take over the leadership of the country after winning the recent elections. Formal talks have not yet begun but South Africa has apparently started sending “positive signals” through its diplomats in Nigeria and to the Nigerian embassy in Pretoria.

“One way is to make the investigators say: ‘Yes, a law has been broken, but it’s true that the government [of Nigeria] is the owner of that money and genuinely wanted to buy arms legally. They might have flouted the rules, but it’s a genuine transaction.’ [We will say] this money does not come from dirty hands or rebels or arms dealers,” the source said.

“We will find a way to regularise the transaction and either return the money or give them arms.”

Nigeria wanted to buy arms such as helicopters and ammunition to strengthen its fight against Islamic extremist group Boko Haram.

Last year, the M&G reported that the head of the national conventional arms control committee, Jeff Radebe, who is also the minister in the presidency, was blamed by his colleagues in government for taking a unilateral decision to try to regularise the sale of arms to Nigeria to facilitate the release of bodies of South Africans who were killed when the TB Joshua church building collapsed in Nigeria.

At the time, Radebe denied it and said the committee had met in October and decided to propose unlocking the Nigerian arms trade.

‘Bona fide error’
The M&G quoted from two letters that Radebe had written to JP “Torie” Pretorius of the Hawks and Dumisani Dladla, the head of the arms control committee’s secretariat, in which he said the failed attempt on September 5 to pay an arms dealer in South Africa “was, in fact, a legitimate requirement from the government of Nigeria”. “Although the required administrative processes were not adhered to at the time, the government of South Africa deems it a bona fide error,” he wrote.

This week a government source told the M&G: “What Jeff did may have been unilateral, but it is now an avenue that South Africa is willing to explore. Even when we were doing damage control after your story, the discussion centred around how we can get a positive outcome out of this.”

The committee apparently met after the article was published in November last year and decided to use the return of the money or the sale of arms to appease the new government of Nigeria after the elections.

“After the story, they had to regroup and say: ‘How do we deal with this situation?’ You cannot let it hang forever; you must find a way to conclude it in a way that will satisfy both sides,” the source said.

Zuma has apparently been briefed by ministers who serve on the committee and has warmed to the idea. Efforts to get comment from Zuma’s spokesperson Mac Maharaj and from Radebe were unsuccessful.

Improved relations
Relations between Nigeria and South Africa have not been at their best, particularly between the Zuma and Jonathan administrations.

“[By returning this money] you get friendship, loyalty and an opportunity where he [Buhari] is willing to work with us to lead the continent and speak with one voice.

“Instead of Nigeria second-guessing us all the time, we will compare notes and stop fighting for things like the United Nations Security Council seat that’s not even permanent,” the source said.

When Buhari took on Jonathan in last month’s elections, Pretoria was already positioning itself for refreshed relations with Abuja.

‘Contributions to democracy’
The M&G has seen a letter that Buhari wrote to Zuma a few days before the elections, in which he complained about Jonathan’s alleged delaying tactics over the poll and the use of violence in an attempt to sway the vote in his favour.

“I thank your government and your mission in Nigeria for your contributions to Nigeria’s democratic process. While Nigeria’s democracy must be established and secured by the commitment to fairness and the rule of law of Nigerians, the goodwill and positive influence of your government have helped us on this difficult yet vital journey,” Buhari wrote. “It is not your business who wins elections in Nigeria, but we seek your help in making sure the election is a free and fair one for us to win or lose according to the people’s will.”

He is expected to hold a one-on-one meeting with Zuma on the sidelines of the African Union summit that South Africa is hosting in June, and it’s anticipated that the issue of the seized money will be discussed.

Either Zuma or Deputy President Cyril Ramaphosa will attend Buhari’s inauguration in May.

Asked for comment, department of international relations and co-operation spokesperson Nelson Kgwete said the department had not been in talks with Nigeria over the confiscated money and knew nothing about a proposal to either return the money or sell arms to that country.

A study shows that the social messaging platform is both emancipatory and destructive, particularly during election campaigns
Read more
Advertising
Continue to the category
Coronavirus