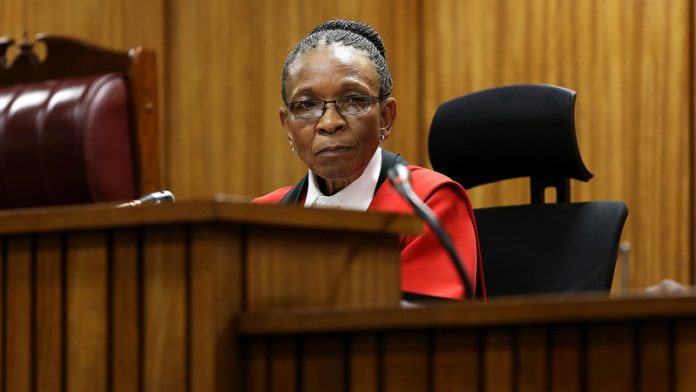 About this time last year, the learned friends at the Judicial Service Commission (JSC) must have felt a bit ignored. It was the Oscar Pistorius trial at the high court in Pretoria that got all the attention, while the more pressing issues at the heart of the judiciary – which played out during interviews for vacancies in the courts – went largely unnoticed.

This time around, the interviews will not be entirely Pistorius free. Judge Thokozile Masipa, who sent the Paralympian to jail for killing his girlfriend, will be one of only three female candidates out of 20 being interviewed for vacancies in the country’s higher courts.

This is likely to highlight the JSC’s perpetual wrestling with gender transformation. This round is also expected to home in on the issue of separation of powers.

The appointment of a judge president in President Jacob Zuma’s home province, KwaZulu-Natal, is also on the agenda. The recent resignation of its judge president, Chiman Patel, under acrimonious circumstances, has opened up a vacancy that observers are watching with keen interest. The division requires stability – and political neutrality – to ensure its legitimacy, experts say.

The appeal court is wedged between the high courts and the Constitutional Court, and is intellectually taxing, with a high caseload.

The higher courts in particular are hotbeds of arguments about transformation, with their small pool of female candidates.

The Democratic Governance and Rights Unit of the University of Cape Town recently made a submission to the JSC highlighting judgments by the candidates that the unit felt the commission should be aware of during its deliberations.

In the case of Dambuza, her judgments seem to point to an impressive candidate. Insiders say she is respected and liked, and she has acted in the Constitutional Court and the appeal court. Her peers regard her values and jurisprudence as progressive and constitutionally minded.

Chris Oxtoby, a researcher in the unit, said the fact that Dambuza had written a dissenting judgment while acting at the Constitutional Court could be seen by progressive members of the JSC as a sign of an independent mind.

Masipa will be remembered for her controversial decision in the Pistorius trial, in which she found him guilty of culpable homicide and not murder.

Oxtoby said it was unlikely that the JSC would question her decision because an appeal was pending. But she could face questions about the manner in which she handled the public backlash to her decision.

Temperament will matter if Masipa is to become the judge president of the Limpopo division. It is a fraught division with a high court under construction and a small legal community. The appeal court regularly hears appeals from this division, particularly in criminal matters.

Cathi Albertyn, a professor of law at the University of the Witwaters­rand, said the position required “strong leadership and administrative ability, and good intellectual leadership”.

The JSC’s commitment to gender transformation seemed promising at last year’s interviews, but the commission was criticised for failing to grant the transfer of a female judge within the same division.

The judge’s husband was on trial for rape, and it was her third application to be to be moved closer to her three children. But the JSC failed to grant her this final request. This prompted people such as Alison Tilley of the Judges Matter Coalition to remark that the judiciary would accommodate women “as long as they act like men”.

This week Tilley said that for the process to be more meaningful, more transparency was needed regarding the appointment of acting judges to ensure that the “tap on the shoulder” method of inviting male judges to act in the high courts was avoided, and that opportunities were given to women and black lawyers who might not play golf in the right circles.

Lawson Naidoo, of the Council for the Advancement of the South African Constitution, said: “There is an old boys’ network that tends to discriminate against women, and the ‘tap on the shoulder’ method of nominating candidates still happens, particularly when acting judges are appointed.”

Albertyn said transforming the Bench was a far more nuanced exercise than bean counting. There were various reasons why women were overlooked, or why they did not apply for senior positions, and these were not universal. She said there had been a concerted effort by some judges president to invite more women to act as high court judges. But transformation went deeper than that.

“Having women on the Bench is important for representivity and legitimacy,” Albertyn said. “A transformed Bench is a legitimate Bench. You must see that there are people there that are like you and that’s critical.

“But deeper transformation is their sense of the Constitution and the rule of law. Women and men can both bring that. You can certainly have men such as [former Constitutional Court judge] Albie Sachs who write incredibly feminist judgments,” Albertyn said.

But the government’s habit of losing high-profile, politically charged cases is likely to be transformation’s twin issue at the interviews in Cape Town.

For example, Judge Rammaka Mathopo was responsible for ordering the National Prosecuting Authority to hand over the so-called spy tapes to the Democratic Alliance in 2013. He will be interviewed for one of two positions at the appeal court. Judge Joseph Raulinga, another candidate for the judge presidency of the Limpopo division, ordered the presidency to hand over the Khampepe report into the 2002 Zimbabwe elections to the Mail & Guardian in 2013.

Oxtoby said these were “quite assertive judgments” which “speak to independence of mind”.

But the elephant in the Bantry Bay room will be land. Two candidates were on the shortlist to fill the position of judge president of the Land Claims Court. But the interviews were removed from the agenda on Thursday. Layman and lawyer alike salivate at the prospect of Economic Freedom Fighters leader Julius Malema and Chief Justice Mogoeng Mogoeng questioning candidates about land reform.

The deputy judge president of KwaZulu-Natal, Judge Achmat Jappie, will be interviewed for Patel’s position. He is an uncontroversial figure, largely liked by his colleagues and has a softer touch as a leader.

“They’re looking to heal the Bench,” said an insider familiar with the dynamics of the legal profession in the province.