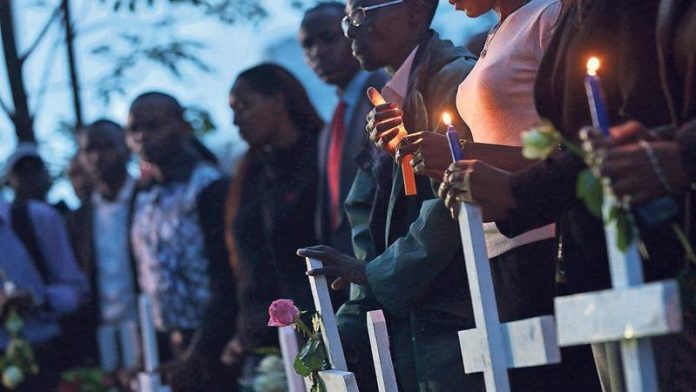 Kenya may start building a wall on its border with Somalia, a week after al-Shabab attacked Garissa University College, killing 147 students.

The plan is to build a wall along various sections of the porous eastern border that is a gateway for militants and thousands of undocumented refugees.

Joseph Nkaissery, Kenya’s interior Cabinet secretary, told journalists that in a bid to reduce illegal border entries the wall would start in the town of Mandera in the North near the borders of Somalia and Ethiopia, and end in Wajir in the Northeast about 100km from Somalia.

“Mandera [in Kenya] and Bula Hawa [in Somalia] are almost merged and you cannot tell which is which,” said Nkaissery.

The wall will be made of concrete and fencing. The governor of Lamu county, Issa Timamy, told journalists that he had been briefed about the initiative and said the wall was expected to be completed before the end of this year.

Kenya is divided into 47 devolved governments, each headed by an elected governor, but security remains the function of the national government.

Divided opinions
“This is where immigrants have been arrested trying to cross into the country or having already entered through the border in Lamu. This [wall] is a good idea and we support it because we believe it will go a long way to secure the region and, indeed, the country as a whole,” Timamy told Kenya’s Daily Nation.

Another section identified to be protected is along the coast. The area to be secured is also in Lamu county, with the wall running near the towns of Kiunga and Ishakani in Lamu East to control traffic from Ras Kamboni in Somalia.

It is not yet clear whether the wall will be continuous along the border. A source indicated that the sections near the main border posts would be concrete and the other sections fencing.

Kenya’s border with Somalia stretches for about 680km and policing it is almost impossible because of the numerous entry points along it.

Though specific details of the wall such as the costs, the thickness, the length, and other specifications are still scanty, the Kenyan government has suggested that construction will start this week.

It could not be established where the funding is coming from and whether the work has gone to tender. Kenya struggles with corruption, particularly in government procurement systems. But the country’s security system does not usually stick to government’s prescribed procurement standards, citing security reasons.

Opinion on whether the wall is an effective plan in dealing with terrorism is divided. Some analysts have said that the wall could be ineffective because al-Shabab militants may bomb it and it will be difficult to guard the entire length of the barrier.

Kenya has also threatened to deport thousands of Somali refugees.

The recent attacks have reignited debates about whether Kenya should keep its troops in Somalia.

Building a wall on country borders is not new. Israel has a wall, which is more than 800km long, to keep Palestinians out. A wall was built in Cyprus along the Green Line that separates the Turkish North from the Greek South. Other walls are in Saudi Arabia, to keep Yemen at bay, the Mexican border and the Malaysian border.

Government faces criticism for ignoring warnings
Garissa was Kenya’s 135th terror attack since it sent its troops into neighbouring Somalia in 2011.

The government is facing criticism over its laxity on security and for ignoring intelligence and terror warnings from both its internal intelligence gathering systems and from foreign governments.

Days before the Garissa attack, the British and Australian governments issued warnings that were dismissed by Kenya as economic sabotage of the country’s tourism industry.

Prior to the Garissa attack Nkaissery asked Kenyans to ignore reports that said the country was unsafe. President Uhuru Kenyatta echoed these sentiments just a day before Garissa was attacked.

Al-Shabab claimed responsibility for the attack, the deadliest since the 2008 bombing of the United States embassy in Nairobi, and said it was in retaliation for Kenya’s continued military presence in Somalia.

Statistics from Kenya’s anti-terrorism police unit show that there have been 133 attacks – one every 10 days – since the offensive began in 2011. Last week’s attacks on Mandera and Garissa put the number at 135.

The British government appears to have been vindicated – the latest travel advisory was the second in recent months.

A similar advisory was issued in 2014 for Mombasa, and Britain closed its consular office just before the Mpeketoni attacks in which 60 people were killed.

Tourism
The incessant attacks have seen a cutback in foreign travellers. The tourism industry shed more than 4?000 jobs last year and about 20 hotels along the Kenyan coast shut down. The Garissa attack is likely to further hurt the tourism industry, which was starting to recover.

Other prominent attacks have been the Westgate mall siege in Nairobi, in which 67 people were killed, and the Mandera bus and quarry attacks where nonMuslims were forced to lie face down and then shot dead.

Though the terror has hit schools in the past, Garissa is the first attack on a university.

Burials of the Garissa dead started early this week.