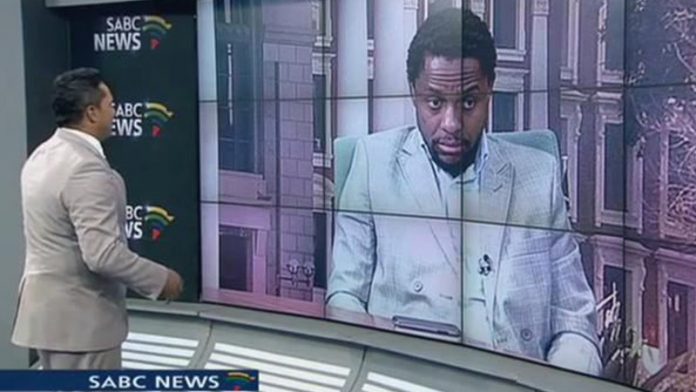 On Thursday SABC news anchor Eben Jansen, who presents the daily TV programme “SABC Newsroom”, held a debate with EFF spokesperson Mbuyiseni Ndlozi about the recent vandalism of colonial statues across the country.

In a video that has gone viral, Jansen is seen interrupting Ndlozi as he tries to answer questions posed to him. Jansen accuses the EFF of “hijacking” the student protest to remove colonial statues and also accuses the party of being responsible for vandalising the statues.

In response, Ndlozi said that the EFF was not responsible for the vandalism of the statues, but instead the party had endorsed the protests and made calls to remove them.

“If our members have been involved [in vandalism], of course, we are all willing to come out and take that responsibility, but we are still trying to find out exactly what happened.” Jansen drew comparisons between the vandalism of statues and the genocide of white South Africans.

Before the heated debate took place, the SABC Newsroom tweeted:

Some social media users were shocked at Eben’s behaviour.

Why was Eben Jansen screaming at @MbuyiseniNdlozi on the SABC news channel about the statues? That seemed rather unprofessional

#EbenJansen is an excruciating statuecolonialismapartheid apologist. He must not be allowed to “poison” the SABC. He’s kind must go

Different hash tags such as #Eben, #EbenJansen and #EbenJansenMustFall was used.

That face you make when you arguing with your dad and he doesn’t want to let you talk #EbenJansen pic.twitter.com/ddcqw99lFf

Where did #EbenJansen study journalism? ANN7

Unfortunately Eben is intellectually bankrupt – thinking it is his sabc. Shame he must fall #EbenJansenMustFall

Jansen eventually cut him off. “I’m not going to allow you to speak anymore Mister Ndlozi because we can’t have a conversation.”

Eish Eben Jansen….hahahahahaha, then he cut the conversation while Ndlozi was still speaking like pic.twitter.com/xnSfyBESSJ

1. Do your research about politics before interviewing politicians.

3. Give your guests a chance to speak after asking them questions.

4. Respect your guests and don’t use them as a means to push your own personal agenda, [or that of the SABC’s?].

5. Be professional and presentable.

6. Stay away from “Red Indians” remarks and trying to justify the removal of “statues” to the genocide of a “people”.

7. Keep your journalism 101 notes – you never know when they’ll come in handy.