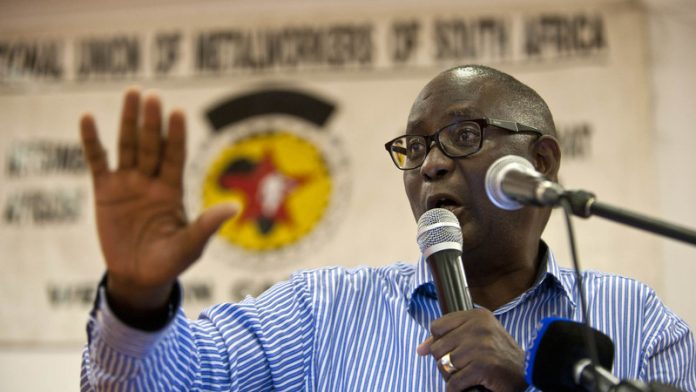 Addressing the Shop Steward Council Cape Town last night, ousted secretary general Zwelinzima Vavi said the federation was facing a class war that had to be dealt with.

Cape Town was the third stop for Vavi, who has not been mourning his fate since he was fired from the federation, but living up to his new slogan by mobilising shop stewards in a bid to win the federation back.

Refusing to refer to himself as a former secretary general until a new one is officially elected, he said it was now time to have a serious discussion on the future of Cosatu.

“What do we do now? Do we continue mobilising you to reclaim the federation, when clearly the National Union of Mine Workers in SA [Numsa] is out and will not be returned by those leaders? When clearly Numsa has been replaced by a shelf union?

“Can we still win Cosatu back? This is a serious question you must take back to your workers. Do you believe that we can still win it back? And to make it an independent instrument in the hands of workers? A militant organisation that will not be controlled by any person, no matter who that person is. Can we win it back or should we now begin to ask serious questions about alternatives? That’s what we want you to ask and debate.”

Supporters
The Community House in Salt River was packed with hundreds of excited shop stewards and loyal supporters, who gave him a hero’s welcome, singing “Skhokhele Vavi sibuyele ekhaya, hayi songena kanjani” before he stepped to the podium. The small hall could not accommodate the number of supporters who had shown up, with some sitting on the floor, standing against the walls and outside to hear Vavi’s battle cry. He said they would not be divided on the ground.

“We must refuse the divisions, so when we say we are not mourning, we are fighting back, we talking as the working class. A united Cosatu that we know. A working class that is not dizzy. Let’s go back and mobilise every worker. That’s what we should defeat them with, our unity on the ground.”

Airing the federation’s dirty laundry, Vavi said they did not even have money to hold a congress this year, scheduled for July. “Last year alone, they spent between five and six million rands on [audit firm] Sizwe Ntsaluba Gobodo, on Numsa and on me. No cent for radical economic transformation. Now they say asinayo imali [we don’t have money].”

Dismissal
He spent about an hour breaking down the events leading up to his dismissal from the party, including the sex scandal, which led to him being suspended in 2013.

Vavi said he had a target for years, and his dismissal was a victory for those who had been baying for his blood. Expressing disappointment at the leaders who had fired him, Vavi said he knew the pain of forming, strengthening and servicing workers. “My body is full of scars, one of my ears does not work as I speak. I know what it took to build these unions.”

He said it was only people who were recruited later who led the federation to where it was today.

“The biggest mistake, for example, is when we elect a leader who has not met or sat in the same meeting as former leaders to learn and we give them responsibility. Don’t be surprised when they lead us to where we are today. It’s the biggest lesson we will have to learn moving forward. It is so easy to destroy what you did not build,” said Vavi.