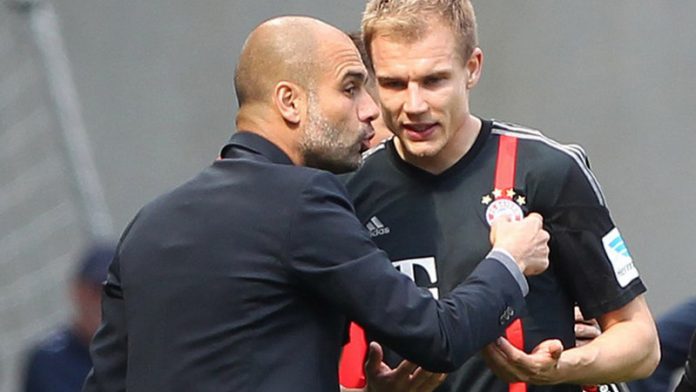 Bayern’s dream of repeating their 2013 European, league and cup treble was left in tatters last Wednesday when Ricardo Quaresma poached two early goals before captain Jackson Martinez grabbed a late third to seal Porto’s 3-1 win in the first-leg at the Estadio do Dragoa.

In four previous attempts, Bayern have never over-turned a two-goal deficit in European competition and Guardiola knows his side face an uphill task at the Allianz Arena.

“This game is our final and we’ll have to put in a super performance,” said Bayern’s head coach.

“It will be hard, but we have to try and I have a lot of trust in my players.”

To compound his problems, Pep Guardiola has eight players on the injury list which comes after team doctor Hans-Wilhelm Mueller-Wohlfahrt dramatically quit last Thursday after 40 years with Bayern, citing a deterioration of faith in the medical staff.

“We know that this is the most important game of the season,” said Germany goalkeeper Manuel Neuer.

“Everyone will do everything they can so that we put in a top performance.”

All three of Porto’s first-leg goals came from Bayern errors as Xabi Alonso, Dante and then Jerome Boateng were pressed into mistakes as the hosts gratefully converted their chances.

Dante clearly failed to learn his lesson as his slip nearly led to Anthony Modeste scoring for Hoffenheim in Bayern’s 2-0 Bundesliga away win on Saturday.

Bayern could wrap up the German league title as early as this Saturday at home to Hertha Berlin, if other results go their way, but a quarter-final exit in Europe would cast a shadow over their season.

Schweinsteiger set to return
In Guardiola’s favour, Porto will be missing suspended wing backs Alex Sandro and Real Madrid-bound Danilo, who both picked up bookings in the first leg.

And Germany captain Bastian Schweinsteiger returned to training on Sunday for the first time after an ankle injury, then flu, but captain Philipp Lahm is still struggling with a stomach infection.

Left-back Juan Bernat should be available despite coming off following a bone-crunching tackle at Hoffenheim.

“It’s not over yet,” said Bayern’s Germany defender Boateng.

“We’re playing at home, so anything is possible.

“The important thing is that we keep things to zero at the back and get an early goal as quickly as possible.”

Porto remained second in the Portuguese league as coach Julen Lopetegui made nine changes for their 1-0 win at Academica on Saturday to rest his first-choice side as winger Hernani’s first-half goal settled the matter. – AFP