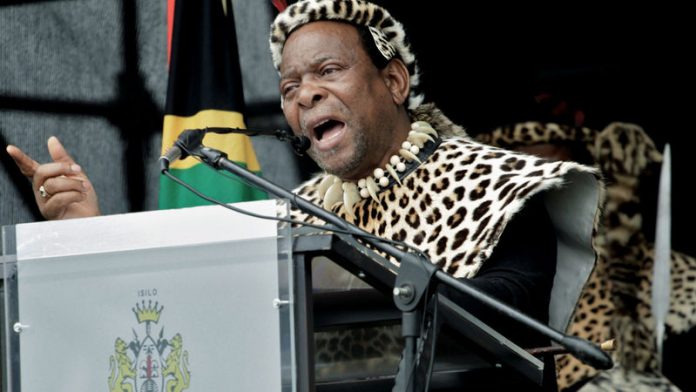 As Hindu priest, Ashwin Trikamjee recited a prayer the crowd started booing him.

They wanted Trikamjee to get off the stage and clapped when he finally stepped down.

MEC Mike Mabuyakhulu urged the crowd to calm down.

“Please, people, these are just prayers. Please behave yourselves,” said the MEC.

The crowds continued to boo priests who were not Zulu.

As a Muslim cleric took the stage the crowds continued to jeer despite the fact that he spoke Zulu.

“As a Muslim, the king is the father of all nations,” he said to the crowd.

Nearly 5 000 Zulu Amabutho (regiments) descended on the Moses Mabhida ahead of Zwelithini’s address.

With traditional weapons held aloft, the group moved around the stadium singing in isiZulu.

The songs have loaded messages of aggression, and the undertone was one that supports a call for foreigners to leave the country.

High profile politicians present
This flies in the face of the stance taken by the state in addressing the spate of violent attacks, which have seen thousands of foreign nationals displaced and seven people killed.

The crowd at the stadium booed all the international guests Mabuyakhulu introduced.

“We need to behave in front of the king and show respect,” he told the crowd.

“We need to listen carefully as our leaders speak today. We also wish for everyone to say something, they should be given respect. If we do that we would have respected the king,” urged Mabuyakhulu.

More than 10 000 people including Amakhosi, Izinduna, and Amabutho are expected to listen to Zwelithini as he addresses matters relating to the recent xenophobic attacks in the province.

When a News24 reporter asked one of the singers what the song meant he said “this is our nation, why do we have to share it with other nations”.

News24 understands that over 300 Amakhosis have been locked in a private meeting with the King since earlier on Monday morning. – News24.com

To talk of cabbages and kings